The University of Denver's 19th Chancellor

Dr. Jeremy Haefner is the University of Denver’s 19th chancellor, and he brings over three decades of leadership experience in higher education to DU. Named chancellor by the University of Denver Board of Trustees in 2019, Dr. Haefner seeks to continue and accelerate the momentum the DU community. He strongly believes DU is an institution uniquely able to serve students as they prepare for lives of purpose and careers of fulfillment—all while serving the public good. Indeed, he believes DU can and must excel in providing a student experience unlike any other university. In DU’s faculty, he sees limitless potential and talent and knows their research will further the creation of knowledge and serve the public good. As chancellor, Jeremy Haefner energetically supports the University’s commitment to diversity, equity, and inclusive excellence, and he will continue to build on DU’s long legacy of relentless innovation and ethical leadership.

Previously, Chancellor Haefner served as DU’s provost and executive vice chancellor. He’s also served in other leadership positions such as provost and senior vice president for academic affairs at Rochester Institute of Technology (RIT) and, at University of Colorado at Colorado Springs, as dean of engineering and applied science, associate vice chancellor for research and dean of the graduate school. He has also held fellowships with the American Council on Education, the National Learning Infrastructure Institute and the University of Murcia in Spain.

As a mathematician, Chancellor Haefner studies integral representation and module theory, and his research has been supported by the National Security Agency, the National Science Foundation, the Air Force Office of Scientific Research and the government of Spain. He graduated from the University of Iowa with a B.A. in mathematics and has a Ph.D. and an M.A. in mathematics from the University of Wisconsin.

Chancellor Haefner and his wife, Maurin, have three adult children and reside in Denver, Colorado.

“We are passionate about education and learning. And yes, when we aim high, we will sometimes fail, but we learn from those failures and get right back to the task at hand. That resilience, that grit, that mindset, those are exactly the attributes we want our students to have when they graduate from this great university.”>

The Latest from Chancellor Haefner 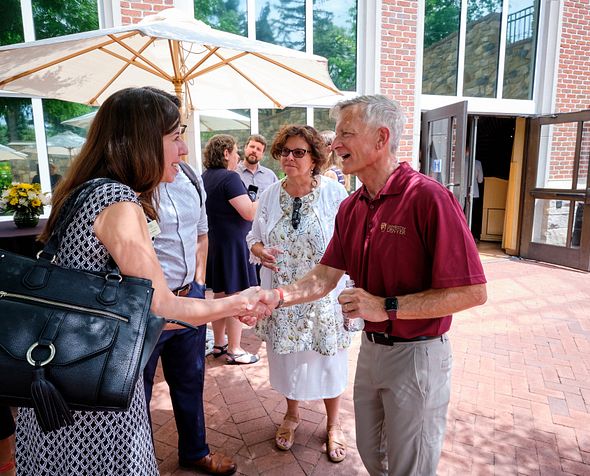 On Wednesday, July 17, more than 500 members of the University of Denver community gathered in the Fritz Knoebel School of Hospitality Management to welcome the University's 19th chancellor, Jeremy Haefner. He mingled with the crowd before sharing his excitement at becoming part of DU's enduring legacy.

Newly appointed Chancellor Jeremy Haefner is a fixture in DU's summer traditions. During these months, he can be seen celebrating the summer graduating class, cooling off with watermelon mojito popsicles at the staff appreciation lunch, welcoming prospective student visitors and walking along our beautiful campus grounds.

Office of the Chancellor