As an expert on the role of dignity in resolving conflicts, Dr. Hicks emphasizes human interaction in helping enable organizations build a culture of dignity, heal highly-charged emotional wounds, and thrive in today's global marketplace.

This workshop focused on research and findings presented in her recent book, Dignity: The Essential Role it Plays in Resolving Conflict (2011, Yale University Press). Her book acknowledges the importance of the psychological dimension of human conflict and the power that can be harnessed through addressing emotional needs in political conflicts. Through her experience in international conflict resolution and with insights from evolutionary biology, psychology, and neuroscience, Dr. Hicks explains the elements of dignity, how to recognize dignity violations, how to respond when we are not treated with dignity, how dignity can restore a broken relationship, and why leaders must understand the concept of dignity to open the way for greater peace.

The workshop with Dr. Hicks emphasized the need to understand dignity from within to promote effective resolution to identity-based conflict, because "it's hard to look at each other as adversaries when people learn about the dignity process together." In her 20 years as a facilitator during international conflicts in the Middle East, Sri Lanka, Columbia, Cuba, Northern Ireland and the United States, Dr. Hicks found that dignity violations must be addressed among all parties—even high-powered political figures—to neutralize power asymmetries and truly bring the groups into conversation.

Throughout the DU workshop, Dr. Hicks and the participants first examined dignity as a concept and found that it is most effectively discussed in the simplest terms. Dr. Hicks defines dignity as our inherent value and our inherent vulnerability as humans, which is not something that just comes and goes. Because dignity is an essential part of our humanity, it can easily be injured when individuals are treated as if they do not matter. The conversation also explored the difference between dignity and respect. While many people feel that respect must be earned, Dr. Hicks emphasized that we must make a distinction between what someone has done (respect) and their inherent human worth (dignity).

Dr. Hicks further explained that recognizing and interpreting dignity is more than just an intellectual endeavor. Instead, dignity exists as a constant, intentional effort to recognize the inherent worthiness in other human beings. She emphasized this point through studies in the field of neuroscience, which shows that violations of dignity affect the brain in the exact same areas and ways as physical injuries. 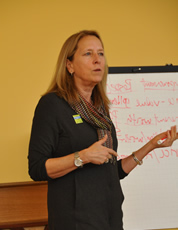 A period of discussion included ways to interpret self-worth, particularly through the separation of actions into reflective and reactive categories. In the reflective category, individuals consider the unconditional worth of their actions and observe themselves in the interaction. In contrast, the reactive category exists as external validation of worth and their need to eliminate threats to their worth.

Finally, the workshop involved what Dr. Hicks called the Ten Elements of Dignity. These ten essential elements emphasize that we approach others as neither inferior nor superior to oneself. They furthermore emphasize treating others justly, with equality, and full attention. These ten elements are juxtaposed against hurtful actions, which were addressed as "The Ten Temptations" of dignity violations. To counteract these temptations, we must not justify returning harm to another, accept fair and constructive criticism from others, avoid the harmful effects of gossiping about others, and admit harmful actions and mistakes through sincere apology.

In addition to her current work as an Associate at the Weatherhead Center for International Affairs at Harvard, Dr. Hicks has also taught courses in conflict resolution at Clark and Columbia Universities and has conducted trainings and educational seminars in the US and abroad on the topic of dignity. She was Deputy Director of the Program on International Conflict Analysis and Resolution (PICAR) at the Weatherhead Center for International Affairs for nine years. She has worked as a member of the third party in numerous unofficial diplomatic efforts in the Israeli/Palestinian conflict, and founded and co-directed a ten-year project in Sri Lanka to bring the Tamil, Sinhalese, and Muslim communities together for dialogue. She has given workshops and lectures in conflict resolution in Columbia, and spent several years involved in a project designed to improve relations between the US and Cuba.

Additionally, Dr. Hicks was a consultant to the British Broadcasting Company, where she co-facilitated encounters between victims and perpetrators of the Northern Ireland conflict with Archbishop Desmond Tutu. These encounters were aired throughout the United Kingdom and on BBC World. In 2013, she spoke main stage for the TEDx Stormont conference, themed "Imagine," on the topic of dignity.

Dr. Donna Hicks  can be contacted at dhicks@wcfia.harvard.edu