An Initiative of the Colorado Collaborative Leadership Institute

Colorado's natural resources are facing increasing pressures due to population growth, changing climate conditions, and natural disasters such as flooding and wildfire. The variety of such pressures and their overarching implications makes it difficult for community leaders and natural resource managers to protect and manage such resources, especially when competing interests need to be considered.

In an effort to promote collaboration and teamwork among Colorado's natural resource stakeholders, DU's Conflict Resolution Institute hosted a workshop titled, A "Collaboration for Community Wildfire Mitigation Planning" as a part of the Colorado Collaborative Leadership Institute (CCLI) in December 2013. As a result of ongoing work with the University of Virginia, CRI received funding for this workshop from the National Urban and Community Forestry Advisory Council. This workshop sought to increase collaborative capacity and networking among practitioners and professional networks within Colorado, specifically through stakeholder panels on issues and success stories, as well as skills training in facilitation, collaboration, communication, and strategic decision-making.

Participants included a diverse range of professionals from across Colorado's 'front range'—from Denver, Boulder, Ft. Collins, and Colorado Springs—and represented universities, state and federal agencies, local elected officials, fire chiefs, foresters, leaders of non-profits and local business people. Given the devastating wildfire damage that has occurred throughout Colorado for the past several years, this workshop emphasized the need and ability for practitioners to implement collaboration techniques in the short-term, as well as fostered a collaborative environment for dealing with these issues on a longer term.

The workshop began with a panel of representatives from the Colorado State Forest Service and Bureau of Land Management, and followed by experiential exercises and participative lectures on leadership in terms of policies and practices for organizing collaboration and policies impacting wildfire mitigation. The diverse group of participants allowed for sharing of their issues and successful ways of addressing different issues, as well as effective communication strategies among their various communities. Professor Tamra Pearson d'Estree emphasized that the CCLI focus is "not about turning everybody into friends; it's about building professional networks and promoting a developed capacity for more productive conversation." While many of the participants had never met, "there was an instant feel of collaboration and connection because of their orientation towards wildfire response and management," as stated by recent graduate Emily Pohsl (MA '13), who offered administrative support for the December workshop.

The December workshop also included an experiential exercise among the participants about the 'dilemma of the commons' in the context of wildfire mitigation, which acted as a simulation of tensions between personal interest and the preservation of natural resources. Additionally, the workshop location in Fort Collins, CO allowed participants to see first-hand the dire need for wildfire mitigation planning with an afternoon trip to the site of the High Park Wildfire.

The impetus for the Wildfire Mitigation workshop emerged from a planning meeting among several Colorado institutions and providers in November 2012. The workshop was modeled after the University of Virginia's Institute for Environmental Negotiation (IEN). The IEN, which has hosted the Virginia Natural Resources Leadership Institute in their state for several years, envisioned piloting a similar workshop training process in Colorado and other states.

After months of planning and collaborating with other Colorado institutions, CRI hosted the Building Capacity for Collaboration in Natural Resources Symposium and Summit in November 2012 (see Spring 2013 newsletter). This event sought to determine whether or not Colorado practitioners felt the need for a common effort to increase capacity for tackling natural resource issues in the state. Finding that a need and desire for collaborative training efforts beyond current endeavors exists, CCLI formed to pilot their first experiential workshop in December 2013. 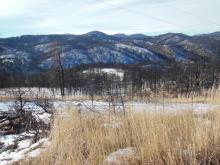 Colorado Collaborative Leadership Institute is an ongoing joint initiative by various local institutions, including the University of Denver's Conflict Resolution Institute, University of Colorado-Denver School of Public Affairs, Colorado State University's Center for Public Deliberation, the Colorado State Forest Service. For this piloting phase, they benefited from working with the National Urban and Community Forestry Advisory Council and the University of Virginia's Institute for Environmental Negotiation.

December's workshop had capacity attendance, with a high percentage reporting that they were able to successfully expand their networks across professional lines as well as a desire attend a future workshop and recommend the efforts to others in their fields. Their responses provided insight for the CCLI future workshop planning, with potential focus on a range of issues form forest health and regeneration, watershed and water use, energy challenges, and future population growth. Based on these responses and the efforts of the November 2012 summit, the CCLI is currently planning another similar workshop to be held in the early fall. Instead of holding the event in the cold winter months, though, CCLI is working towards a meeting in the more temperate spring to allow travel and boost attendance from across the state. As these projects continue and expand, the CCLI looks forward to additional endeavors on the 'Western Slope' of Colorado as well as a more regional initiative with surrounding states engaged in similar issues.