In September 2015, Conflict Resolution Institute (CRI) traveled to Turkey as part of an inter-religious dialogue initiative to explore connections between Colorado and Turkey and between minority and majority religious groups. The dialogue initiative represented a partnership between CRI and the Multicultural Mosaic Foundation, a Denver-area non-profit dedicated to promoting diversity, tolerance, and understanding across lines of religion, ethnicity, and culture. Two Conflict Resolution students, J.B. Desselle ad Rachel DiFebbo, and CRI co-Director Tamra Pearson d'Estrée had the opportunity to assist with facilitation and program evaluation related to dialogue and joint travel.

As preparation for the trip, Jews, Muslims, and Christians from the Denver community met over the course of six months prior to travelling to Turkey. Facilitators from CRI and Mosaic worked together in leading the group through dialogue on the state of relationships between religious groups in Colorado. The group began to explore what could be done to improve aspects of relationships that were unproductive or damaging and what could be done to enhance existing positive elements and interactions. The trip to Turkey provided an opportunity to reflect on these relationships in a different context, where the religious identities of those belonging to the majority and minority are flipped. With this in mind, the group entered the country prepared to discuss interfaith work and what it means to be a minority or majority.

While in Turkey, the group met with representatives of minority religious groups as well as independent media organizations. Many different viewpoints were represented. A Presbyterian pastor, who as a Turkish Christian is in the minority, shared his hesitation towards many interfaith initiatives. He believes such initiatives are often "superficial" without any connection to the actual coexistence that does occur amongst Christians and Muslims in Istanbul. Group members also met with members of an Alevi group, which highlighted the nuances of "majority" and "minority." Although the Alevi are Muslim, they still identify as a minority. Alevi is a branch of Islam linked to Shiism, contrasting to the Sunni Muslim majority in Turkey. This parallels perceptions in the United States where certain Christian groups may feel similarly, as though they are a minority due to their place in a greater network of denominations and social standing. 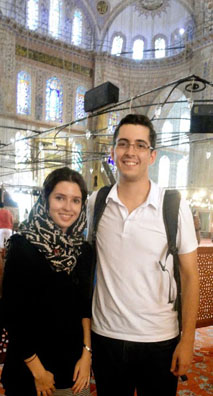 The group was also able to tour the facilities of Zaman, an independent media organization which has a complex relationship within the Turkish political landscape. Editorials and features often take on a stance that is outspoken against official activity. The group was struck by the dedication to free speech that the Zaman's staff displayed, such as being willing to work for a year without pay if Zaman were further squeezed by intimidation.

Meeting with organizations who have tense relationships with their government presented unexpected lessons in attempting to understand societal relations in a different cultural and historical context. Beyond discussions on religion, the wider conception of minorities and majorities played a key role in the trip. This was the case in meeting with other media and even philanthropic organizations. Participants left with conflicting feelings of both admiring the local people while also fearing for the future of the system in which they are embedded.

The highlight of the trip for many participants was the homestay experience in Niğde, a city located in central Turkey. The infinite hospitality shown by the host families included a children's dance performance, several hearty authentic meals, a demonstration of the traditional ebru painting technique, and gifts aplenty. Even with language and cultural barriers, the group was able to forge meaningful bonds that lessened fears and created connections that reached from Colorado to Turkey. Spending the night in strangers' homes quickly moved many in the group from a place of uncertainty to comfort in Turkey. While the historic sites such as Hagia Sofia were places of awe and inspiration, it was the interactions with local people which made for the most memorable moments of the trip.

The partnership between CRI and Mosaic led to two student internships for Desselle and DiFebbo. Under the mentorship of Dr. Tamra Pearson d'Estree, these students were able to be involved in planning the dialogue and learn valuable facilitation skills. In addition to providing facilitation services for the dialogue, CRI collected data to assist with evaluation of Mosaic's program and to inform academic literature on dialogue. As part of this research, these students had the opportunity to be involved in crafting, distributing and analyzing participant surveys. Two additional Conflict Resolution students, Samantha Haas and Julie Hawke, are also contributing to the report for the Multicultural Mosaic Foundation. The final report will provide insight into Mosaic's program, which could guide the organization in its travel programs and future dialogue-travel pairings. Furthermore, as little research has been done on the effects of coupling dialogue with travel, the results of CRI's analysis may contribute to understanding a unique approach to dialogue and conflict resolution.

Ultimately, CRI and the dialogue group came away with a strong connection to the Turkish people. The hospitality they encountered in everything from the homestay to dinners at local homes left an indelible impact. Following the trip, it seems to be a confident assumption that friendships were formed, and meaningful reflection occurred following the trip. The final analysis conducted by CRI will shed light on these assumptions.