Six tips to deal with conflict during video-calls 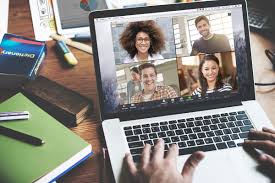 Video calls and meetings are not new concepts. Companies and people have been using video calling to connect to friends, family, co-workers, and potential employers for years; however, video calling has never been the sole form of communication for work, school, and play, until now. As a response to containment of COVID-19 and social distancing, "work from home" and online Zoom, WebEx, and Microsoft Teams, video calls became the norm of how to communicate with others. But just like in person, online and video calls yield their own kinds of conflicts. This article hopes to provide you with three ways to manage your conflict, and three ways you can be proactive, and prevent conflicts from emerging in your workplace, classes, and social engagements.

Three Ways to Prevent Conflict Before it Happens:

1. Take Breaks. Video chat, although it is the new normal, does not mean that it is easy for our brains to process. The BBC interviewed Marissa Shuffler, an associate professor at Clemson University, and Gianpiero Petriglier, an associate professor at INSEAD to discuss why video calls drain our batteries. Shuffler and Petriglier argue that video calls are harder because it takes longer to process verbal cues and body language, forcing us to pay attention more.i They argue the best way to alleviate the stress of video calls, is to space out your calls, and during those breaks try going for a walk, stretching, or even taking the time to get a snack or drink from the kitchen to alleviate the fatigue.

2. Set Clear Boundaries. MarketWatch recommends that one way to prevent further conflict is to set clear boundaries for yourself and make them available to others by using your office calendar.ii Additionally, the Harvard Business Review released a quick three-minute video to help establish clear boundaries and routine that is advice that will both help you focus while working from home, but also prevent you from working too much. Some of these tips are to create a dedicated work space, make a schedule (and stick to it), and quit at quitting time. Watch the full video here.

3. Build Community. Take time before jumping into a work meeting or a class to learn from each other or gauge how people are feeling during this time. If people feel both connected as well as heard, they are less likely to be contentious during conflict.

1. Ask Questions. Remote work becomes difficult because there are not as many opportunities to get to know and understand your co-workers. The conversations that used to take place while passing time or in each other's offices are no longer available, and the effort to setup video calls for quick questions and conversation now seem daunting and exhausting. That is why when a co-worker, classmate, or friend says something you don't agree with, now's the perfect time to ask questions and learn more about what and why they said what they did.

2. Dedicate a Separate Time to Discuss the Conflict on Video/Phone. The danger of video calls and working from home is there are many distractions that can take us away from having difficult conversations. Additionally, it is easy to also let a conflict fester between a co-worker and yourself, because after you end the video call, you might have a week before talking with them again or avoid talking to them altogether. Avoid this period and be proactive about setting a meeting time with this co-worker or friend to discuss the conflict without distraction. If both of you are invested in talking through the disagreement, you might see better results; however, even if you do not solve the conflict you both will feel respected by the other party for dedicating the time to working through the conflict.

3. Use Written Conversation to Document the Conversation. Harvard Business Review stressed the importance of following up with written communication following a video or phone conversation to discuss the conflict. They suggest that if the conflict was considered to be minor, then sending an appreciative note via email is appropriate, but if the conflict was more intense, it might be nice to give a handwritten card appreciating the other person for taking time to discuss conflict. Additionally, Harvard Business Review suggests putting tasks on your calendar that you agree to when working out the conflict, such as a weekly meeting to continue communication or tasks that you will do as part of the resolution to the conflict.