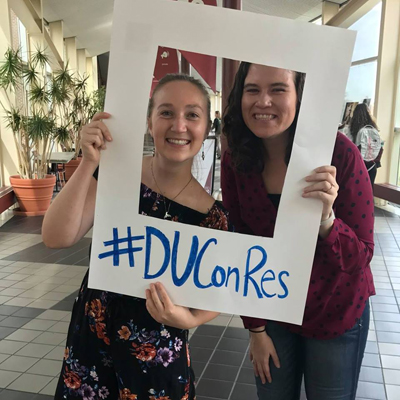 This fall quarter, the Conflict Resolution Institute partnered with University of Denver's Office of Inclusion & Equity Education (IEE) to host the Sustained Dialogue Campus Network (SDCN) for Dialogue Facilitation Training. During the three-day, 16-hour long training held from September 29-October 1, Rhonda Fitzgerald, the Managing Director of SDCN, led the training of approximately 30 participants including students, faculty, and community members on the Sustained Dialogue (SD) approach and how to facilitate the dialogues.

The Sustained Dialogue Institute (SDI) is headquartered in DC, but shares its approach to transforming conflicts in campuses, communities, and workplaces. The founder of SD, Dr. Harold "Hal" Saunders, was a US diplomat involved in peace processes around the world. Based on his negotiating experiences, Saunders wrote the SD five-stage process that participants now learn about in the Dialogue Facilitation Training. In 1999, Saunders collaborated with students at Princeton to institute SD to address tensions on campus; this was the genesis that led to the facilitator training experience on DU's campus.

Sustained Dialogue, true to its name, focuses on sustained, regularly occurring dialogues- the dialogues are not designed to be held in a single, two-hour long meeting. Instead, building relationships is at the core of SD and the methodology for change focuses on five elements of relationship: identity, interests, power, perceptions, and patterns of interactions.

The SD process is encapsulated by the five-stages: deciding who to engage in the dialogues, sharing experiences and building trust, identifying specific systems and dynamics of the community challenges, outlining steps to change relationships, and then embarking in individual and collective action. This is more succinctly expresses through the stages labeled as: Who? What? Why? How? Now!

In practice on college campuses, groups ranging from 12-15 individuals meet weekly for around 1.5 hours to engage in sustained dialogue. While individuals might sign up to discuss a certain topic (i.e. Free Speech and Hate Speech), the dialogue is fluid and at the end of each session, the group decides the direction for the next meeting. The five stages and focus on relationships are pillars in SD, but the training at DU included much more to prepare potential facilitators on how to apply the SD approach. 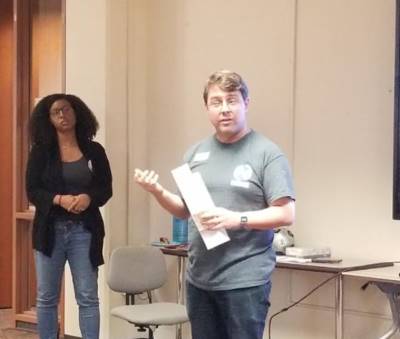 Participants had the option of attending solely the first eight hours of training (the Inclusive Leader Training), or completing the entire 16 hours for the Dialogue Facilitator Training. The weekend was free of cost for participants and on top of the in-depth training, individuals were rewarded with meals and access to SD resources.

The volunteer participants came from diverse student groups including graduate students, undergraduates, and faculty and staff from various schools. Attendees were informed that by the end of the training, they would be equipped with the skills and knowledge to lead Sustained Dialogues with peers from the DU community.

The first half of the training addressed skills involving dialogue, asking questions, and listening. Fitzgerald covered topics such as "The 4 C's: Questions to Intervene in Tense Conversations," and participants practiced clarifying, changing the conversation to experiences, creating space for others, and challenging the statement with a credible counterpoint with partners. Fitzgerald demonstrated how to ask strong questions during dialogue, relate questions to experience in order to build relationships, discussed the big eight dimensions of social identity, and led activities that allowed the group to practice the skills.

Next Steps at DU

Participants who completed the full 16-hour weekend training in September are eligible to facilitate dialogues on DU's campus in the spring quarter. IEE will recruit students and other members at DU to sign up for a SD group, including the participants who attended the facilitator training who want to be involved with SD, but might not want to be a facilitator.

In addition, there is another retreat hosted during the weekend of October 20-22 that will train participants (only individuals who have first completed the Dialogue Facilitation Training) in preparation to facilitate the student retreat over MLK weekend. The January retreat will serve as a launching point for the continued dialogue groups that will meet throughout winter and spring terms.

Participants were enthusiastic throughout the weekend and overall excited about the prospect of engaging with SD throughout the upcoming year. The spring dialogues will be advertised on campus soon and will hopefully provide the platform needed on DU to create relationships and address hostilities.