Alumna Brings a Social Justice Lens to Her Documentary Projects 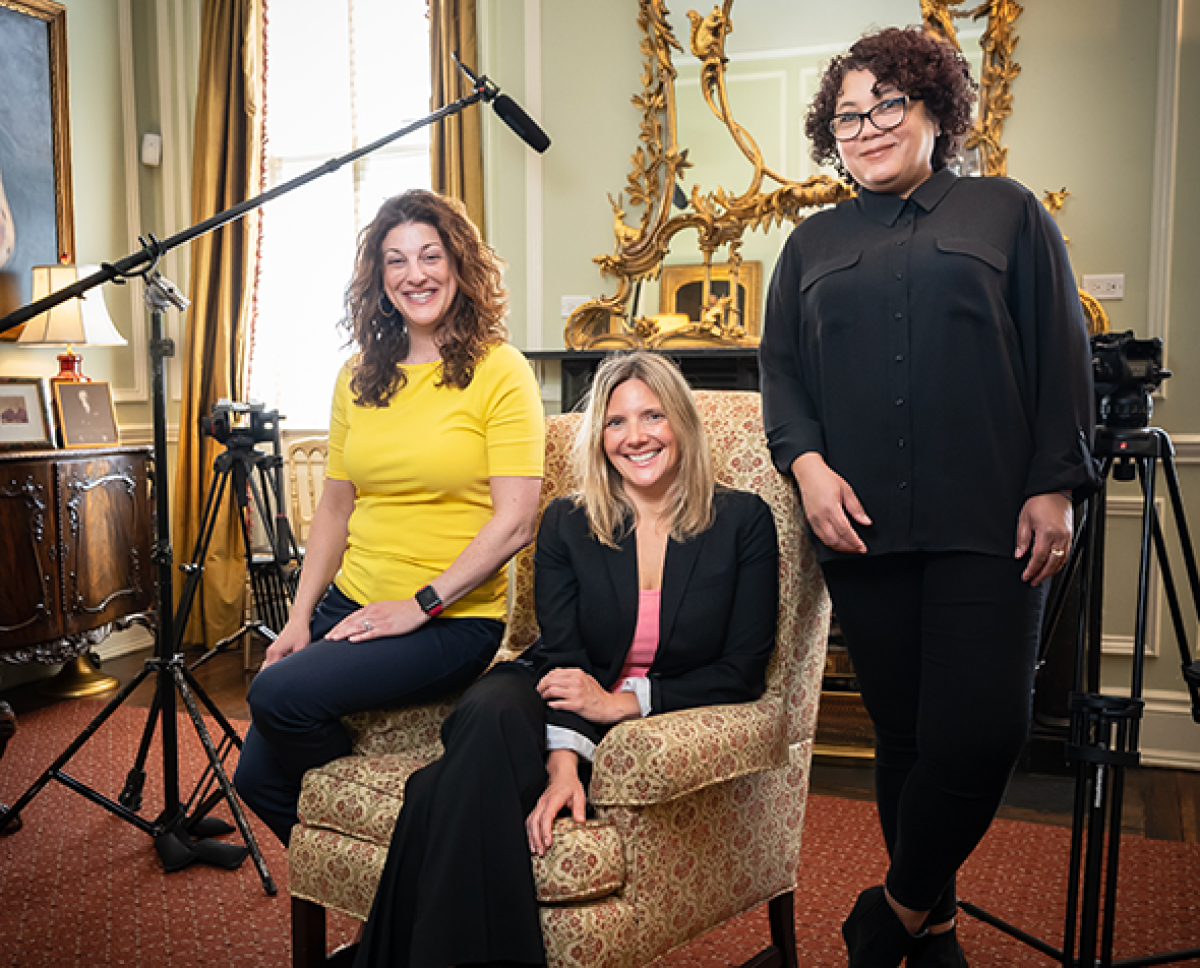 This article appears in the summer issue of University of Denver Magazine. Visit the magazine website for bonus content and to read this and other articles in their original format.

University of Denver alumna Kiley Kraskouskas (BA ’00) has been successfully making documentary films for years. But it wasn’t until the debut of “The American Diplomat,” a documentary that aired in February on PBS’s American Experience, that she felt as though she’d made it.

“Nobody really anoints you a filmmaker,” she says. But with a PBS credit headlining her portfolio, Kraskouskas can safely claim the mantle.

Originally titled “Changing State: Black Diplomats, Civil Rights and the Cold War,” the documentary knitted together the stories and struggles of three Black Foreign Service officers—Edward R. Dudley, Carl T. Rowan and Terence Todman. It was the brainchild of FLOWSTATE Film, a women-owned, full-service production company based in the Washington, D.C., area. Kraskouskas is one of three founders and takes on everything from producing and writing to directing.

The film earned its share of kudos and citations for timeliness. American University’s news site even credited it with serving up a well-timed lesson for democracies struggling to do better: “‘The American Diplomat’ offers a new perspective on an important era of history and gives the viewer a glimpse into one of the most historically elitist, white male-dominated factions of the government. The documentary puts forth a more realistic look into this era by highlighting actors who are usually ignored. Not only does the film illuminate the great American contradiction implicit in democracy, but it also provides examples of how we can do better.”

Kraskouskas couldn’t be more pleased. “To have the longest-running historical documentary series pick up the film and co-produce it with us—it was our original work and they didn’t come to us to commission it—to see it come on TV, it felt like everything we’d been working towards for 15, 16 years had come true,” she says.

Even before “The American Diplomat” aired on PBS, Kraskouskas had a number of well-regarded films to her credit, including the recent documentary “The Free State of George Floyd,” 2014’s “Dear Walmart,” which documented the workplace challenges facing the retail giant’s labor pool and 2013’s “The Last Song Before the War.”

For Kraskouskas, “The American Diplomat” represented the culmination of years of hustle in an industry for which she received no conventional training. (At DU, she majored in sociology and political science, and in graduate school at New York University, she pursued a master’s in sociology, hoping to secure a PhD and a career in academe, perhaps even at DU.)

Her FLOWSTATE collaboration with producer/director Rachell Shapiro and producer/editor Leola Calzolai-Stewart goes way back and encompasses a number of creative efforts. In 2016, the three decided to formalize their filmmaking efforts by launching FLOWSTATE.

The three women strive to create socially conscious films on complex political issues in a collaborative and family-focused environment free of clashing egos and “creative genius” personalities. “I’ve known Leola and Rachell since we were in our 20s,” Kraskouskas says. “The three of us came up together. I had enormous respect for them even knowing them in their 20s. I know how hard all of us work.

“The unique thing with us, I think, is that it’s about the work,” she says. “It’s less about whose idea this was, or who did what, and it’s more about the finished product.”

Among their finished products, one stands out for its intrinsic sense of social justice.

Imagine you’re a member of a tight-knit neighborhood where local businesses line the streets. An ornate church building looms large, and kids play football at a grassy park nearby.

Then, when one of your neighbors, George Floyd, is murdered by police, your sense of community is damaged. The lively neighborhood is reduced to a narrow newscast shot of a convenience store and horrifying video of officer Derek Chauvin kneeling on Floyd’s neck.

“There’s a murder on your street,” Kraskouskas says. “And your neighbors, who you’ve known and hang out with, are suddenly part of a global social movement.”

In the immediate aftermath of Floyd’s murder, Kraskouskas was invited to Minneapolis by a former NYU classmate. Previous experience taught her that a filmmaker can’t just drop, camera in hand, into a situation—especially one so recent and raw—and expect anything besides contempt.

“Eventually, we actually proposed the film idea but said it’s up to the community,” she recalls. “I told them that I can do a short film—I don’t know that I’m the right person to do a long documentary as I’m not part of this community—but something that’s short to help raise attention, maybe help raise money, and the community will have a chance to review it and give their feedback on it.”

The result was “The Free State of George Floyd,” produced by FLOWSTATE Films in collaboration with Arizona State University’s Center for Work and Democracy and with help from the community at 38th Street and Chicago Avenue in Minneapolis.

The latter proved essential to the creative process. The community had already filmed many instances of daily life in the square, including the work of photographer Billy Briggs, who happened to live fewer than 100 yards from where Floyd was murdered. Briggs’ work was combined with videos from other community members—and even a drone pilot—and then stitched together with shots from Kraskouskas.

The lightly scripted final cut of “The Free State of George Floyd” featured no interviews, largely because, Kraskouskas says, no one wanted to be the story’s “main character.” After revisions and notes from the community, the final product was developed.

“Going to the square was one of the more profound experiences I’ve had in my whole life,” she says, noting that George Floyd Square, as it is now known, has become a spot for memorials, art installations, protests, communal grief and communal healing.

“It’s such a sacred space. The energy is really hard to explain. It’s calm like a memorial site and sad, but there’s a sense of community.”

From Sociology to the Silver Screen

When Kraskouskas enrolled at NYU, she hoped to pursue a terminal degree in sociology.

“I wanted to get my PhD. I wanted to teach. I would’ve loved to come back to teach at DU. So, I went to NYU, … but I could see pretty early on that I wasn’t the right fit for a PhD program. I struggled. There were fewer deadlines and I had a hard time organizing myself even though I loved the content.”

She also discovered a love for storytelling and filmmaking.

“I ended up getting more and more interested in film, and of course, being in New York, you’re in this film [and] arts community,” Kraskouskas says. She and some friends started a sociology audiovisual club and began experimenting with making videos. Not long afterward, her husband’s job took her to Washington, D.C., where she embarked on an internship with Women in Film & Video, a professional resource for people who want successful media careers in the Mid-Atlantic states. Over the following years, Kraskouskas worked with a number of production companies before helping to form FLOWSTATE.

Even at DU, an interest in documentary filmmaking had taken root. In a class on political law, students watched “Eyes on the Prize,” an Emmy- and Peabody-winning documentary series on the civil rights movement.

“That really started to light an interest in how film and documentary can convey political and sociology content but in a more engaging way than the heavy theoretical books we were always reading in these classes,” she says. Soon, she started watching more documentaries, “films on inequality, Michael Moore’s films, things like that.”

Today, careful viewers can find echoes of “Eyes on the Prize” within “The American Diplomat,” and that influence traces directly back to Kraskouskas’ time at DU.

As a child, she wasn’t particularly focused on activism. Her parents gave her a civic-minded upbring, but she wasn’t “marching in the streets, or anything like that.”

Her DU experience, beyond introducing her to a love of filmmaking, taught her about law — about how it can be used to the benefit and detriment of various groups. The study of labor movements, Marxism and class issues all carried into her body of work.

The biggest piece of the puzzle, she says, is her appreciation for social justice. It shaped her work in Minneapolis, West Africa and everywhere in between.

That was developed at the University of Denver.

“I started working on documentaries, working for production companies, but I was always working on film, historical content, political content,” she says. “I was always using the skills and critical thinking. The sense of social justice that I developed at DU was informing the film work I wanted to do. I can’t express how much that means to me.”