Alumna Stands for Women's Equality, On and Off Football Field 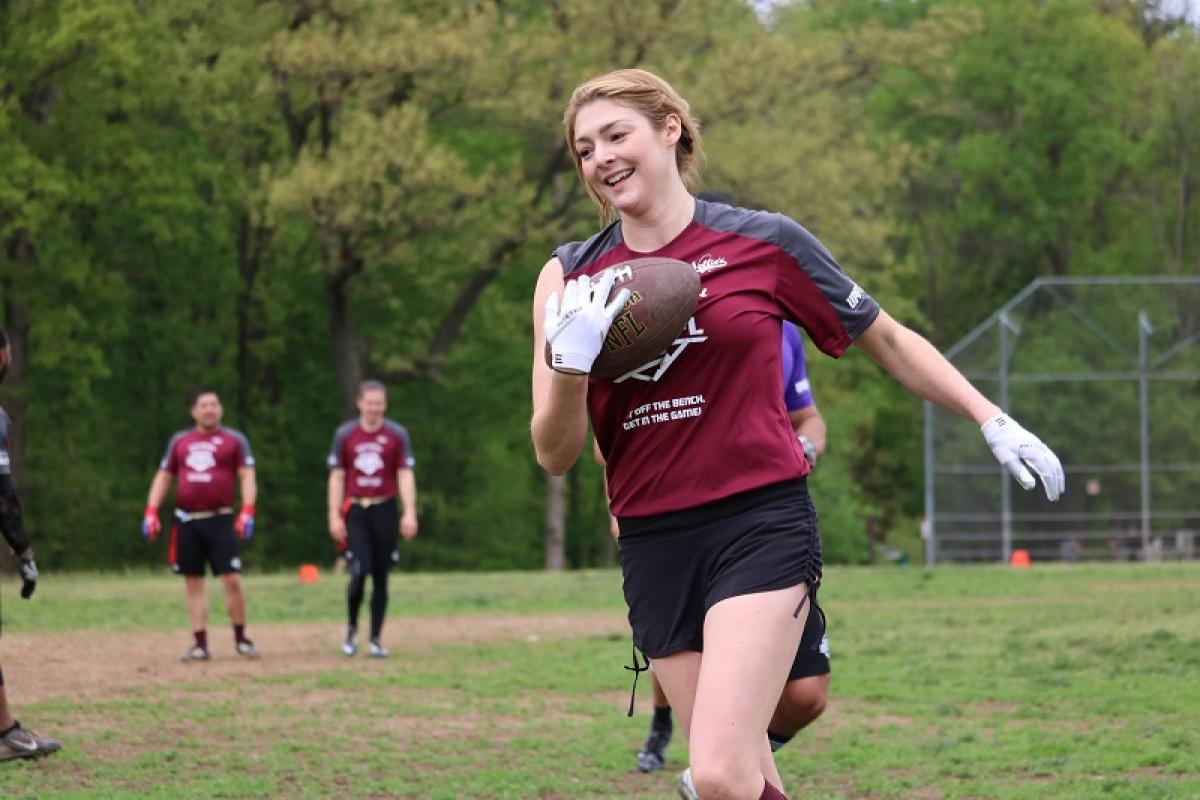 As far as careers go, Amanda Livingstone’s can certainly be considered in character. That a precocious, fiercely feminist kid would end up working to protect the health and reproductive rights of women and girls doesn’t come as much of a surprise.

Her hobby on the other hand?

That’s another matter. Nothing in her history would suggest that she would end up playing in and helping run the D.C. Gay Flag Football League. After all, Livingstone (MA ’13) had never played football before. Nor does she identify as part of the LGBTQ community.

But for the past five years, the graduate of the University of Denver’s Josef Korbel School of International Studies has found her home in the LGBTQ community, making plays and making friends.

“It’s been life-changing,” Livingstone says. “It’s made me a better LGBTQ advocate and ally. I met my fiance in the league. It’s had a huge impact on my life, and I cannot say enough how much I appreciate the time that I’ve spent in the DCGFFL.”

The league came along at just the right time for Livingstone, who was then working in a Washington, D.C., CrossFit gym. Some of the players were her clients, and every Monday, they would come to the gym talking about how much fun they had had playing the previous weekend.

Livingstone hopped on board and soon, everything began falling into place. After seeing a promising opportunity at a nonprofit fall through, she started working at the White Ribbon Alliance a few months later, fighting for women across the globe.

As an advocacy officer with the group, Livingstone supports national alliances in five sub-Saharan countries: Kenya, Malawi, Tanzania, Uganda and Zimbabwe. She makes sure their leaders have the resources they need to help women realize their rights to quality health care and well-being.

“Instinctively, every woman knows what she wants and needs for her health care,” Livingstone says. “But when women are not included in the decision-making processes around her own health and her own rights, that’s when women start dying early. That’s when they start getting pregnant early. So it’s really ensuring that women and girls have access to that education, that understanding of what they are owed as citizens of a country and how to voice their priorities and tell those decision makers what they need and what they want.”

Frequently, Livingstone travels to countries in sub-Saharan Africa and meets her colleagues face-to-face. Together, they work on proposals, budget oversight, project management and event planning.

So many of the skills she utilizes were developed during her time at DU. With undergraduate degrees in anthropology and international studies from Loyola University in Chicago, Livingstone wanted to continue her education in a program that focused on international human rights. That narrowed the pool considerably, and living in Denver was too attractive to pass up — as were the opportunities to meet and listen to two former secretaries of state, Condoleezza Rice and Madeleine Albright.

Livingstone may have arrived at DU already oriented toward her line of work, she says, “but [Korbel] gave me the actual skills. It was a much more focused opportunity to look at human rights from a more dedicated standpoint. Being able to have that practical look into the field of women’s health and humanitarian response was just really valuable and energized me even more to continue moving in the direction of women’s health and rights.” 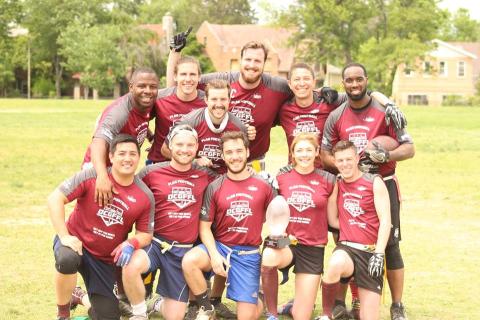 This fall, Livingstone has a lot to look forward to. In October, she will take another trip to Africa for her professional passion. That’s the same month as Gay Bowl XIX, the national gay flag football tournament in which her travel team, the Washington Senators, will compete.

In a way, Livingstone says, her work and play go hand in hand. Her favorite aspect of the DCGFFL is that there are no gender-specific rules or accommodations. Unlike in other coed sports leagues, for example, points scored by women are not worth more, nor are there are "closed" plays where a woman must throw or catch the ball.

“Women are not seen as having something the league needs to make up for,” she says. It’s just like the change she’s trying to make in the world. “We’re all on the same playing field.”