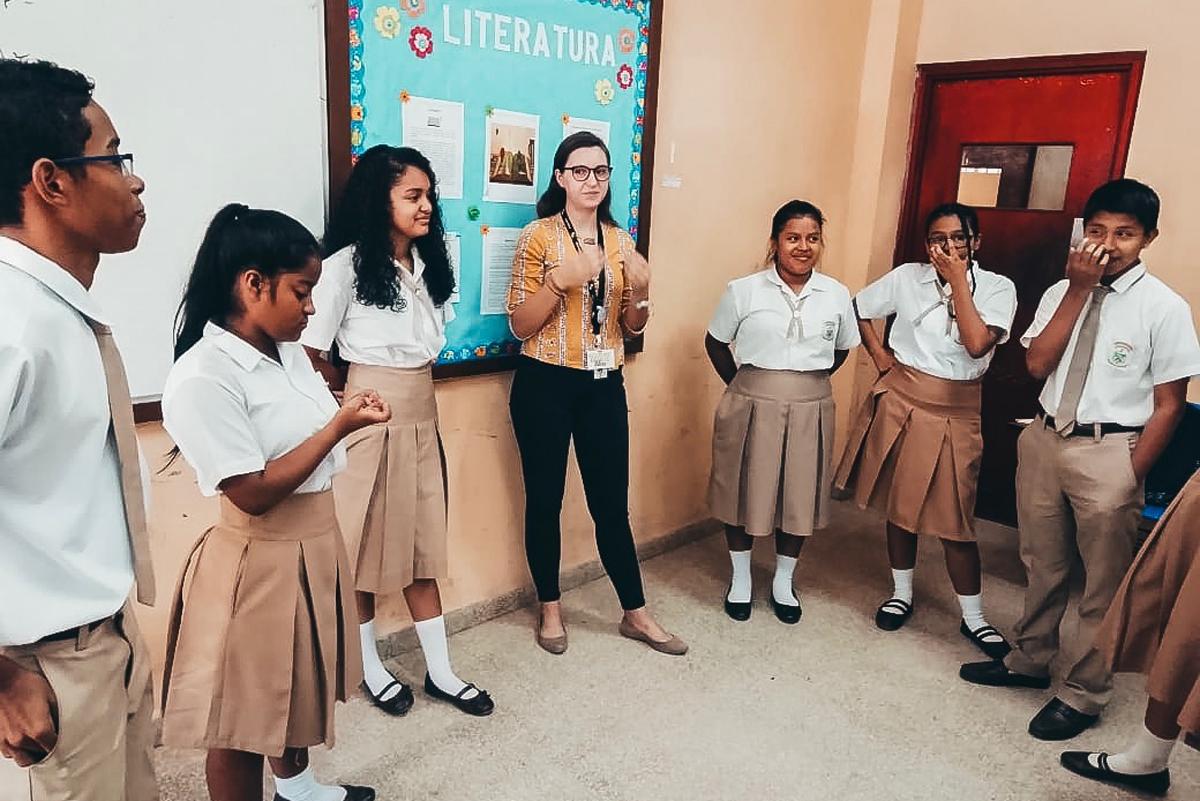 As a Peace Corps volunteer, Elena Kalahar helped students in a Panama school learn English and develop appreciation for its expression in literature.

Elena Kalahar (BA ’16) was half way through her two-year stint with the Peace Corps in the Bocas del Toro province of Panama when the coronavirus pandemic hit. With 12 months of service under her belt, she was just beginning to feel as though she knew how to maximize her skill set to help school kids learn English.

“A year in service is the time when everybody is starting to feel in the groove of things,” she explains. Once Peace Corps volunteers have a few months on the ground, they’ve built trust, established relationships and figured out what works. In addition to feeling confident in her role working alongside “teacher counterparts” in the classroom, she had initiated outreach efforts to help students build enthusiasm for English in its printed form. “I hosted a reading club with one of my counterparts after school,” she recalls. “The students were really, really engaged; they loved the program.”

Which made it all the harder when, on March 13, Kalahar, along with other volunteers in the country, received “stand-fast orders” from the Peace Corps. These instructed volunteers to remain in their communities and to monitor their WhatsApp accounts at least twice daily for further word. For many of the volunteers, Kalahar says, that was not so easy. Spotty Wi-Fi and cell phone service often meant they had to climb to the top of the nearest hill — once in the morning and once later in the day — to find a signal and monitor their accounts.

Further word came just as Panama City was recording its first cases. “It was very, very sudden,” Kalahar says. “They didn’t give us a lot of information except, ‘Get out of your communities and get to Panama City as quickly as possible.’” Once there, the instructions continued, volunteers were to establish communication with the regional Peace Corps coordinator and hasten, pronto, to a designated hotel.

Kalahar had a mere 12 hours to stuff what she could into a couple of suitcases, notify her landlord, give away the rest of her belongings — a refrigerator, some sticks of furniture — and bid farewell to her home away from home. Unfortunately, she was unable to reach many of her newfound friends, and because school was closed, she couldn’t say goodbye to her students. Nor could she take more than a few minutes to grieve over the work that remained undone, the language progress that she wouldn’t get to measure and savor.

Getting to Panama City was no easy feat. Fortunately, Kalahar was able to hop a ride on a private bus the Peace Corps dispatched to pick up the 40 or so volunteers in the area. Arduous enough under any circumstances, the 11-hour trip was made even more difficult by periodic stops for spot checks. “We got stopped several times by authorities who were taking everyone’s temperature,” she says. That no one had even a slight fever counts as a small miracle. “I think some people were nervous, because as volunteers we sometimes run into health problems, like parasites,” she says.

After arriving in the capital city, the volunteers stayed in the hotel for several days, suitably masked, appropriately distanced and waiting for a chartered flight out of the country. “The vast majority of the volunteers were just really sad. None of us wanted to go,” Kalahar recalls.

When it looked as though the airport might shut down before the chartered plane could depart, Kalahar booked her own ticket home, returning to Denver via Fort Lauderdale and Chicago. Back in the Mile High City, she had to quarantine in her family’s windowless basement for 14 days, largely because her mother cares for her aging grandmother, who was at particular risk from the virus. Kalahar picked up her meals at the top of the stairs, chatted with her family through a closed door, and spent her time finishing Peace Corps business and reflecting on how to put her double major in Spanish and international studies back to work.

Then she was invited to join several other Peace Corps volunteers — 7,300 of them were evacuated worldwide — to share her tale via a video produced by Business Insider. That experience whetted her interest in journalism and storytelling, and she’s now planning to pursue a graduate degree in the field. In the meantime, she blogs about her experiences at anopendiary.com and has created a video log, or vlog, for Youtube.

Whatever path she pursues, it’s sure to combine her desire to serve with her urge to explore the world beyond her Colorado home. After all, she says, “I have always had an adventurous spirit.”