Alumnus Delves Into a Neglected Chapter of WWI History

Meet the humanitarian crusaders behind an ambitious relief effort 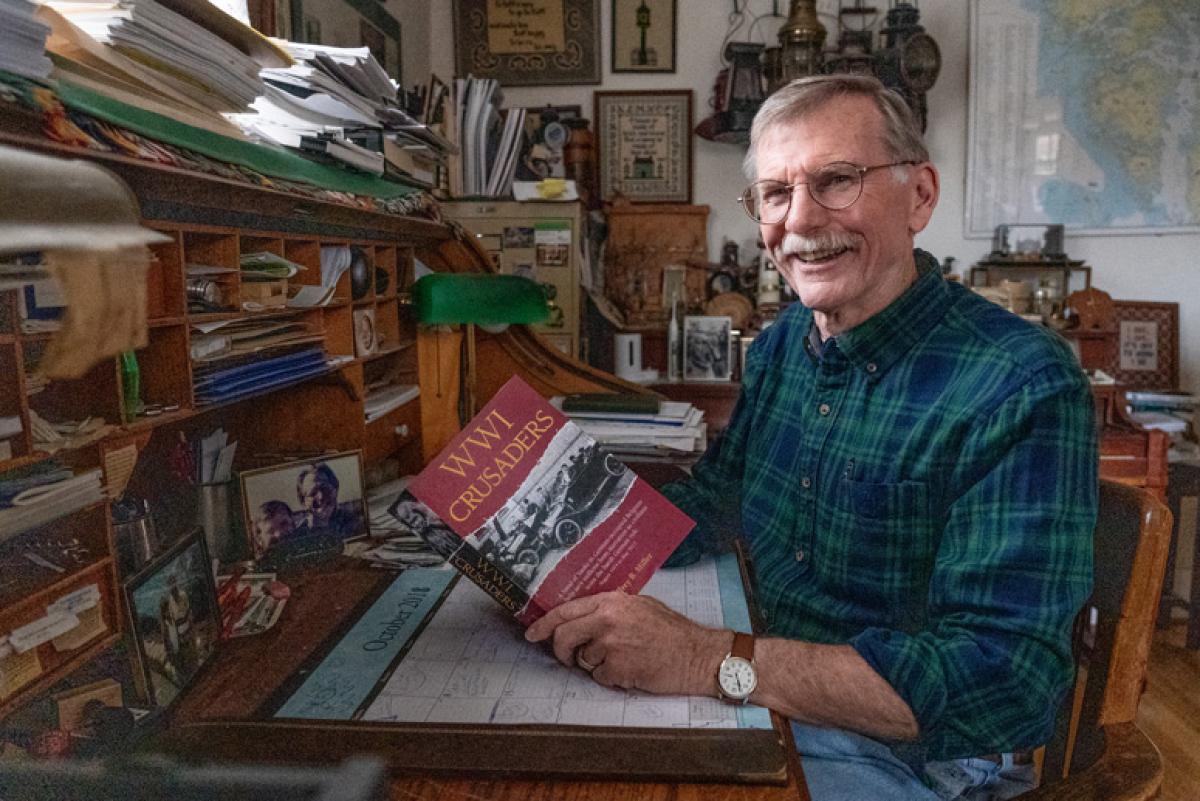 In “WWI Crusaders” (Milbrown Press, 2018), DU alumnus Jeffrey Miller introduces readers to the humanitarians behind the Commission for Relief in Belgium (CRB), which organized the supply of food to the German-occupied country during the “the war to end all wars.” The book debuted on Nov. 11, Veterans Day, in honor of the 100th anniversary of the end of the First World War.

Since graduating from DU, Miller (BA ’75) has put his history degree to good use as a freelance writer, magazine editor and chronicler of years gone by. “WWI Crusaders” is his second book about the CRB, which was created by Herbert Hoover, who went on to serve as the 31st president of the United States. Miller’s latest title has received a starred review from Kirkus, which called it a “tour-de-force history” and a “magnum opus that celebrates the qualities of compassion, honor and humanitarian virtue.”

Ahead of a Veterans Day appearance at the Tattered Cover’s Colfax store, Miller agreed to an email interview with the DU newsroom. The conversation has been condensed and edited for clarity.

How did you come to explore this topic?

As a young man, I was interested in the stories that my grandfather, Milton M. Brown, told about his time in German-occupied Belgium as one of Herbert Hoover’s “delegates” in the CRB. My grandmother, Erica Bunge Brown—who was a young Belgian girl working in food relief during World War I—rarely spoke of that time, although I could be wrong, because I was a teenager then and had the attention span of a gnat. In the end, most of the stories I remember came from my mother, Erica Sophie Lucy Brown Miller, who had heard them from her parents.

In the early 1980s, after my grandparents died, I inherited all their CRB-related diaries, journals, letters and photographs. Because I did not want to do a book about my family, I began decades of research about the CRB, World War I and Belgium. I wanted my family to be only a thread in the tapestry of any book I would write.

You have written “WWI Crusaders” for a general audience. Why was this important to you?

For many people who have only been exposed to the study of history in textbooks, it is a dull subject filled with dates and dead people. To me, history has always been so alive that I can practically see, taste and feel it.

After years of reading the journals and correspondence of more than 50 individuals [who populate “WWI Crusaders”], I feel these people are very much alive. I want to be beside first-year Rhodes scholar David Nelson as he walks alone toward the Belgian border not knowing what to expect. I want to hear U.S. Legation secretary Hugh Gibson’s impassioned arguments as he tries to stop the execution of British nurse Edith Cavell. I want to warn Belgian Eugene van Doren that the Germans are coming for him. I want to help Belgian Erica Bunge start the dairy farm that will provide milk for Antwerp’s children. And I want to have a beer and intense conversation with war-correspondent-turned-compassionate-relief-worker E. E. Hunt.

By studying how and why they dealt with insurmountable problems, we can learn much about how to face our own devastating predicaments.

How did you research your CRB books?

My research began in the early 1980s before research was available online. I began digging in libraries and used bookstores around the country for primary source books—visiting when I could and writing to all the others. The books I found led me to other sources, and I continued to collect more and more books, journals and magazines from that time.

I also wanted to find the diaries, journals and correspondence from some of the individual CRB delegates. Most had graduated from Ivy League schools, so I wrote to their libraries and found out what they had available. Fourteen of the approximately 185 CRB men who entered German-occupied Belgium were graduates of Princeton. I visited Princeton’s libraries multiple times and rummaged through dusty old file boxes and read words that had been passionately put down 100 years ago. It was great fun!

I also made multiple trips to the Herbert Hoover Presidential Library Archives in Iowa and the Hoover Institution Archives at Stanford University.

My research ultimately led me to the families of some of the CRB delegates (most of them had already passed away). They had their own materials that they were generous enough to share, along with some wonderful stories not in any historical records.

I know it might be surprising to some younger generations, but there is still an incredible amount of research material all over America — and the world — that is not available online. A good historical researcher still has to get his or her hands dirty wading through all those dusty files.

“WWI Crusaders” features a remarkable Denverite in the person of Maurice Pate. Tell us about him.

A Denver native and a Princeton graduate, Pate was an untested 21-year-old when he went into Belgium as a CRB delegate. His job was to help save from starvation nearly 10 million civilians trapped behind German lines—all while the war raged on.

From his time in the CRB, Pate began a lifetime of public service—most notably with children—that culminated in being founding director of UNICEF. In 1960 he was nominated for the Nobel Peace Prize because of his work with UNICEF, but he turned down the nomination because he felt UNICEF should receive it, not himself. Nine months after he died in 1965, UNICEF won the peace prize. Herbert Hoover called Pate “the most efficient human angel I know.”

What would you like readers to take away from your book?

That these young American delegates dropped everything, worked for free, went into the unknown of war-torn Belgium, and did a job that no one could explain in detail—all without asking for anything in return. They simply wanted to help their fellow human beings.

When the CRB was founded, most people thought the vision of helping the Belgians was impossible. The CRB was attempting something that had never been done before by governments or private citizens —saving an entire nation, trapped in the middle of a horrific world war, from starvation.

From individual commitments, the CRB food-relief program became the largest food-relief program the world had ever seen, and yet few Americans know about it today. It’s one of the greatest truly selfless acts that Americans have ever done, and yet it has been forgotten, because the man who founded the CRB and became known as the Great Humanitarian was named Herbert Hoover.

[As chair of the CRB], Hoover imagined the impossible and then went out and did it. He proved many people wrong and showed how humanitarian relief efforts should be run in the future. In fact, what he did with the CRB, and later with the American Relief Administration after the war, changed the way the world saw America and the way Americans saw themselves on the world stage.

But because Hoover is perceived as having been a bad president, much of his humanitarian work—and the work of those associated with the CRB—has been neglected. These stories deserve to be remembered.