Do the Bang Thing specializes in supporting the community 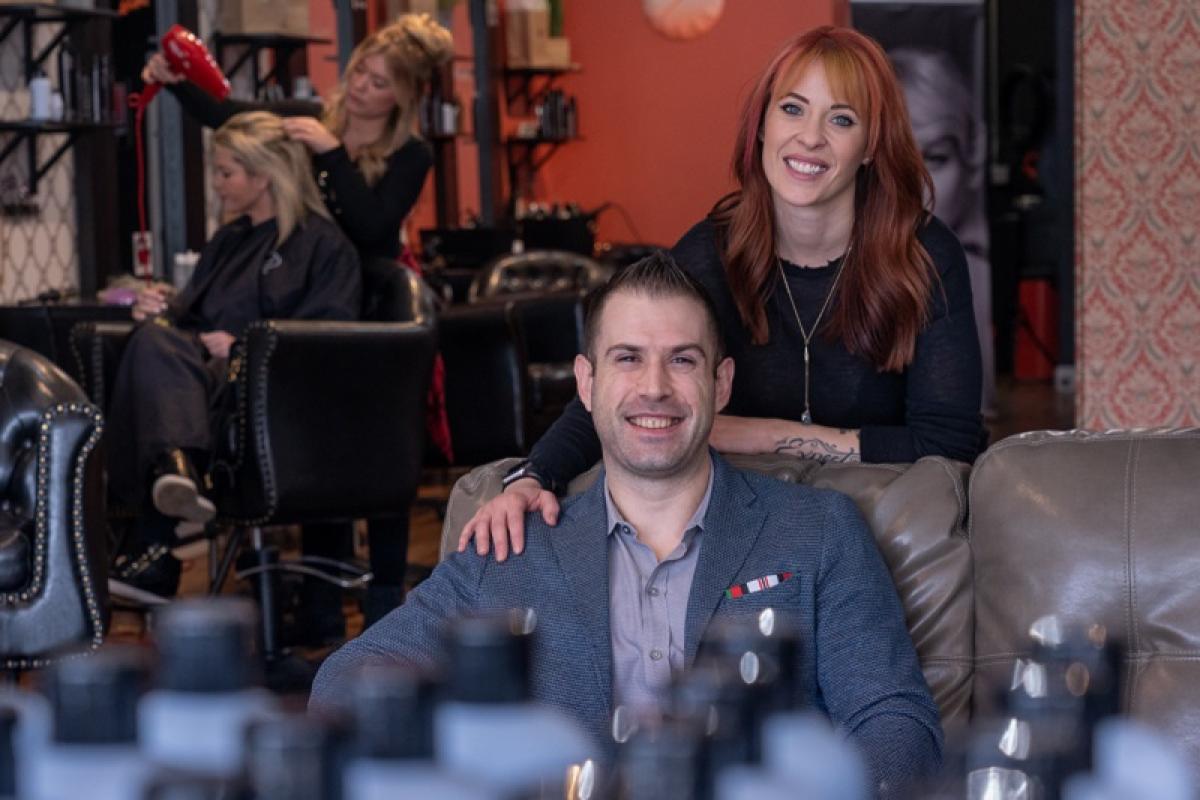 Tony Adams walked into a Great Clips hair salon with two demands. He needed his previous day’s cut to be fixed, and he needed Toby to do it.

OK, so the haircut wasn’t that bad. There actually wasn’t anything wrong with it. But the 21-year-old needed to see that cute stylist again.

More than 15 years later, the cute stylist is his wife and hair is his business. Along the way, Adams (BS ’14, MBA ’17) took shifts as a mortgage originator, a non-profit CFO/CIO, a father, an infantry team leader, a combat medic, a University of Denver pre-med student and a Daniels College of Business MBA graduate.

But perhaps it is fitting that Adams, a man with an unorthodox career path, would ultimately end up as co-owner of Do the Bang Thing Salon, one of the more unorthodox establishments of its kind in Denver.

“No one would have ever thought a little hair salon could be doing amazing things in the community or differentiate itself the way it has,” he says. “But I think when you focus on the right things, when you make it more about the service that you do and make it about people, that’s one way to really differentiate yourself.”

Another way is the video that greets visitors to the salon’s website. A teenage girl with braces fidgets with her hands and tells the viewer, “I’m not good enough.” Though the main commodities at Do the Bang Thing are cuts and colors, Adams says the salon’s most important product is confidence.

And that’s more than just a tagline. As part of its “#DoConfident” campaign, a portion of all proceeds at Do the Bang Thing are donated to Girls Inc. of Metro Denver, an organization devoted to creating young women who are strong, smart and bold.

“It’s important to us that women and ladies get to hear that message that you’re great the way you are,” says Adams, who has a 15-year-old daughter of his own. “I think it’s really provided a lot of meaning for a lot of people.”

The campaign has been a springboard for business too. The outlook has transformed the company’s culture. ColoradoBiz Magazine rated Do the Bang Thing as one of the top companies to work for, and there is a waiting list of stylists who are anxious to apply whenever a chair opens up.

It’s been an unexpected transformation for Toby, whose salon began in her living room, and Tony, a one-time college dropout and Afghanistan veteran.

Though Tony Adams started his own business at age 22, his passion waned, and a few years later, he joined the Army. After returning home with dreams of studying biochemistry and becoming a doctor, he enrolled at his neighborhood school, DU, for its familiarity and reputation. As a veteran and a father, at least 10 years older than many of his classmates, he viewed college through a different lens.

“You learn who people are and you start focusing more on…what they bring to the table,” he says. You take the time to get to know people and find out what motivates them.”

But as graduation approached, Adams realized biochemistry and medical school were not where he saw himself. He wanted time with his family, a work-life balance. His ambitions, as he says, evolved.

He enrolled at DU a second time, this time in the business school, just as Toby moved from her home into a six-chair salon.

As the business has grown, Tony has found his two DU degrees more and more applicable.

The more enjoyable it’s been for the customers, the more enjoyable business has been for Toby and Tony, who say they’re having more fun than ever. They smile when they remember the Mother’s Day gift basket their stylists made for one struggling client, or the time they personally delivered forgotten car keys to another. Every Veterans Day, Tony — former president of DU’s Student Veterans Association — takes pride in providing free haircuts not just for members of the military, but for their entire families.

“This is a very intimate industry where you literally meet somebody and within 10 minutes, you’re touching their head,” Toby says. “You have to make it comfortable and enjoyable.”

Tony agrees: “You focus on the right things, you make it more about the service that you do and make it about people. It’s a lot of hard work, but it’s been rewarding.”