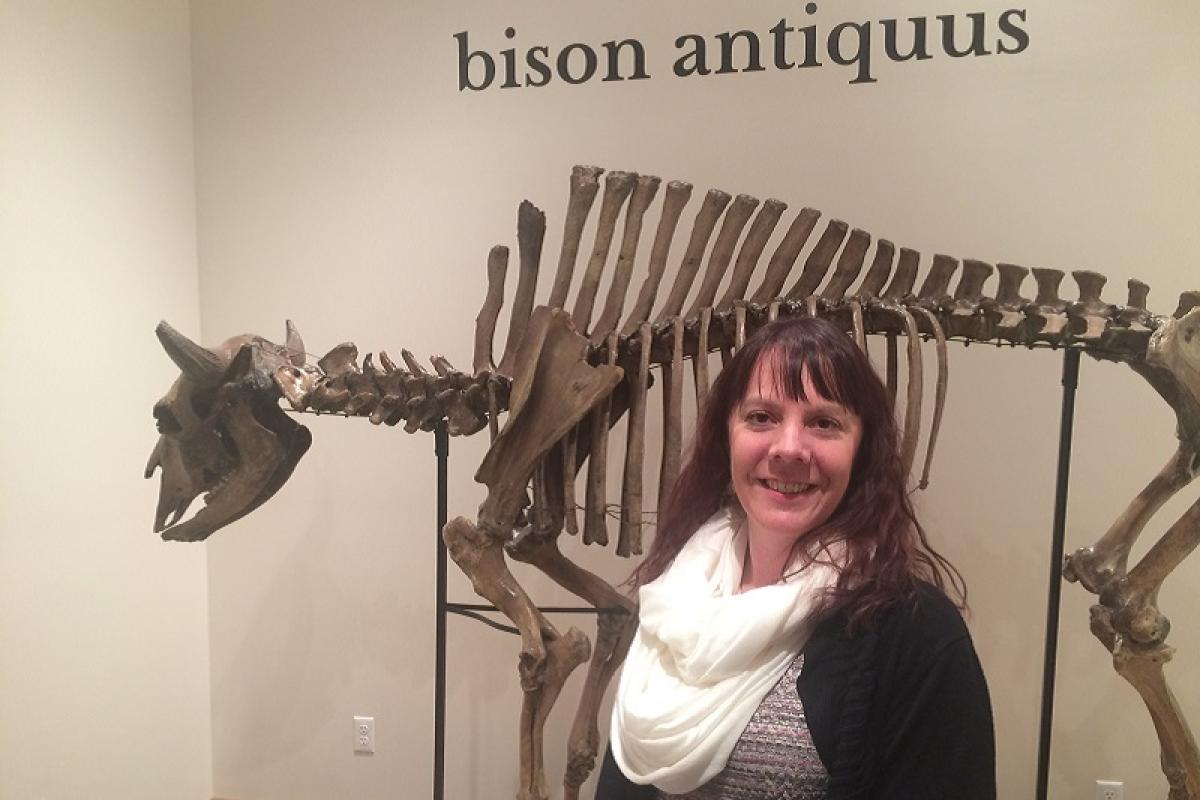 Pulled over on the shoulder of a North Dakota highway, Rachel Johnson had to laugh.

So this is what it feels like to be a celebrity.

The state trooper who stopped Johnson (BA ’02) for speeding had just given her a break on the ticket. After all, this was the same Rachel Johnson he had seen featured on the front page — A1, above the fold — of the Jamestown Sun, in a glowing report welcoming her to her new job: the first-ever collections manager at the National Buffalo Museum.

Johnson, who graduated from the University of Denver with a degree in anthropology, chuckles as she recounts the story: “I keep telling my boss I went into museum collections because I’m not that interested in being a public face.”

But Johnson might want to get used to the attention. In the mere six months she has managed the collections, the National Buffalo Museum has seen its profile rise, with increased programming and notoriety.

“It was really the excitement of where this organization is and where it could spring to,” Johnson explains when asked why she took a job more than 1,000 miles from her home in Santa Fe, New Mexico. “It’s got the bones to be something very exciting.”

Sprawled across 200 acres of pasture, the National Buffalo Museum straddles I-94 between the better-known cities of Bismarck and Fargo. Most of that land is for a herd of bison to roam and graze, which, until recently, included a white buffalo named Dakota Miracle.

Most of Johnson’s work happens inside a 6,000-square-foot log building, where she sorts through a dizzying array of artifacts and donations. Among the curiosities: a 10,000-year-old bison skull, a complete skeleton of bison antiqus (ancestor to the modern bison) and a full body mount of White Cloud, the town’s beloved albino bison. Visitors will also see plenty of artwork as they learn the animal’s history and significance to the country.

Ranchers and local businesspeople founded the museum in 1991 and the connections to the bison meat industry have remained. The industry, Johnson was surprised to learn, may actually have saved the species from extinction. A hall of fame honors those who have had significant impacts on the restoration and conservation of the country’s national mammal.

“Capitalism actually did something positive here,” Johnson says. “When they realized they could sell the meat, they started having private herds, and that’s why there are 400,000 bison now, because of the meat industry.”

For the 11 years before her arrival in North Dakota, Johnson worked at Santa Fe’s Museum of Indian Arts & Culture, an exhaustive repository that contains more than 10 million items, eventually rising to the role of archaeological research collections manager. But for an animal lover like Johnson, the move to the smaller National Buffalo Museum seemed a natural fit and a refreshing change of pace. As the only staff member with a background in museums, she has the opportunity to shape volunteer programs, educational opportunities and exhibits.

“One of the most rewarding things has been to work with the younger staff and help them develop,” Johnson says. “I’m introducing museums to younger people for whom this is just a summer job. It feels fun to me to be able to pass on what I’ve learned in my career.”

Johnson’s career started at DU as a transfer student from Arapahoe Community College. She had already earned an associate’s degree in political science but had decided that field wasn’t for her.

Growing up, she had been a “put rocks in your pocket” kind of kid, constantly studying the world around her and questioning why people do the things they do. And DU’s anthropology department proved the perfect place to tap into her passions. Thanks to its manageable size, she got to know the faculty and other students on a deeper level. Just as important, she took advantage of hands-on job opportunities at DU’s Museum of Anthropology, which helped her pay her bills as she pursued her degree.

“I absolutely credit it with being able to stay employed in anthropology,” she says. “I question my path all the time, but I have to turn around and tell myself: ‘I have been working in my field of education, solidly, pretty much since I graduated. So obviously I made some pretty good choices.’”

In Jamestown, Johnson is a big fish in a smaller pond. And her experience has shown her the positive change that can be made from that vantage point.

“[The director] has a lot of passion and a lot of excitement and has done big things quickly,” she says. “So together, I think we can do a lot of cool stuff.”

Which means the front page of the paper better make room for more big headlines.