Sturm Hall’s room 210 is an unfamiliar — and perhaps even uncomfortable — place for a black man on this recent Saturday morning.

Not because the five young men behind the desks stick out on a largely white campus, but because, for once, at the University of Denver’s Black Male Initiative Summit (BMIS), they blend in.

“These boys, whether they identify as African, African-American or biracial, have this chance — just for today — to be one of many,” says Anthea Johnson-Rooen of the middle- and high-school students on the University of Denver campus for the annual event.

As a BMIS coordinator and director of DU’s Equity in STEM program, Johnson-Rooen knows just how participants feel. “When you’re the only one, you can’t act the way you want to because there’s criticism and judgement and bias. Being in this environment they get to really embrace all that they are.”

For a decade now, BMIS has provided young men in grades 8–12 an opportunity to develop their identities through education and leadership. Each year, the event’s theme invokes the closing couplet of William Ernest Henley’s famous “Invictus” poem: “I am the master of my fate, I am the captain of my soul.”

On the final day of Black History Month, 105 boys are ready for a full day of mastering their fate. In the morning, they sat in small groups, sharing stories of discrimination and feeling different. Facilitators (often DU students, alumni and members of the community) guided the discussion, pushing the boys to examine the “cycle of socialization” that shapes their experience through harmful, tired narratives about black men.

Down the hall, a session for adults became a fiery, passionate discussion of how parents could be there for their young men. Parents, administrators and community leaders asked how they can find success despite a system that is so often stacked against them?

“A lot of people will smile in our faces and act like they’re supportive, but the moment we say, ‘Hey, that’s not right,’ then we are the angry black man,” says Tay Anderson, who delivered the keynote address. Last November, at age 21, Anderson became the youngest black person ever elected to the Denver Public Schools board. He graduated from Thomas Jefferson High School despite involvement in gangs, navigating the foster care system and facing homelessness. “We need to be able to break that stereotype, because we are more than just angry black men. We’re passionate about making sure we get an education. We’re passionate about making sure we’re keeping our families together.”

The BMIS is the product of a graduate thesis by Tracey Adams Peters, former director of the campus Cultural Center. She wanted to create a community-focused program her own son could eventually enjoy.

Johnson-Rooen and Cameron Simmons, assistant director of undergraduate admission, have since taken the reins, eager to provide a meaningful experience for young men like Abe Abraham.

“It empowers the black youth,” says Abraham, a first-year computer science student at DU. A scholarship from BMIS helped him afford DU. “It helps them have a voice. And it helps them feel comfortable sharing what they feel.”

After three years of BMIS participation, Abraham returned as a facilitator, moved by the experience he had as a teenager.

“I love giving back to people who were in my position, who are tough, who are broke and are just trying to have fun and be here with their homies,” he says.

During the lunch break in Lindsay Auditorium, Abraham rises from his seat and takes the stage. While the participants ate, the BMIS invited people to grab the mic and share a rap, a poem or a song.

“[I’m] trying to go be a star,” Abraham raps. “Trying to go light a spark in this new generation.”

A few rows up, Ntwali “Tony” Bisimwa nods along. A refugee from the Democratic Republic of Congo, he has been in the United States for only 18 months. In school, he is aware of his accent and his appearance. At BMIS, he says, he feels at home.

As a student takes the mic to recount his grandfather’s stories about the fight for civil rights, Bisimwa leans over to a reporter in the crowd.

“Hearing their stories, sharing their experience,” he says, nodding once again. “This is why I’m here.” 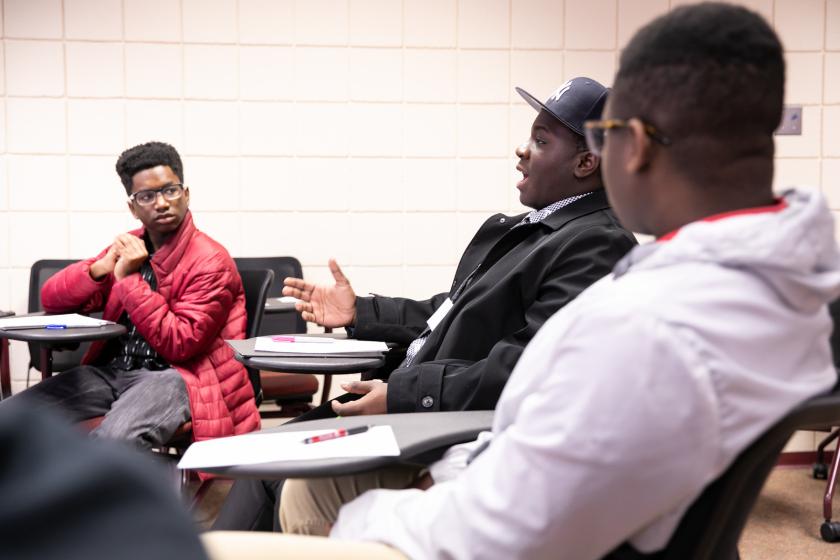 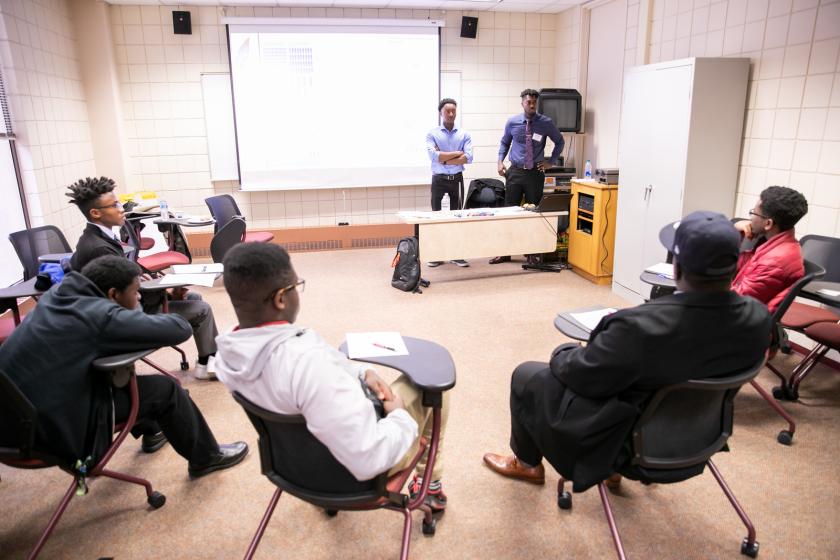 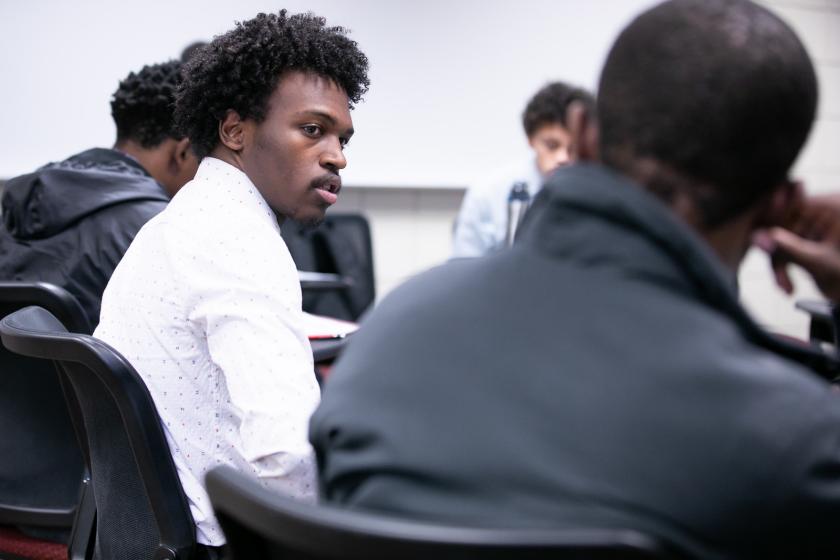 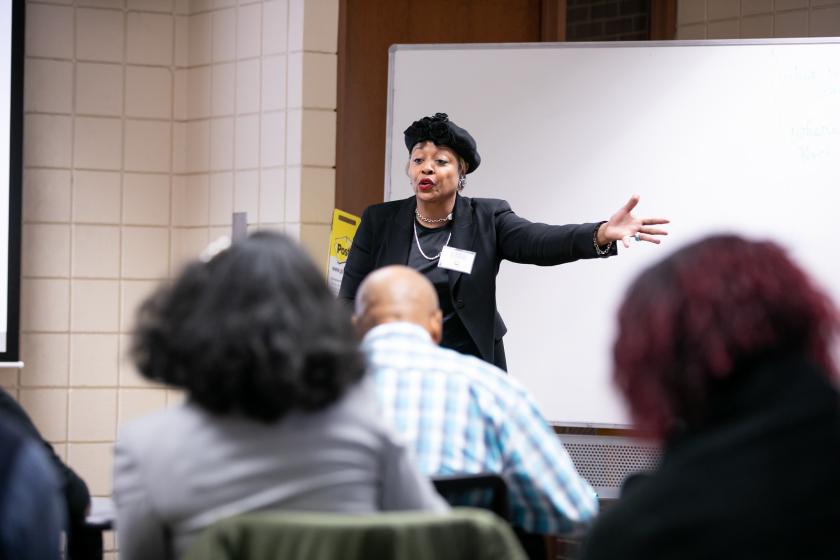 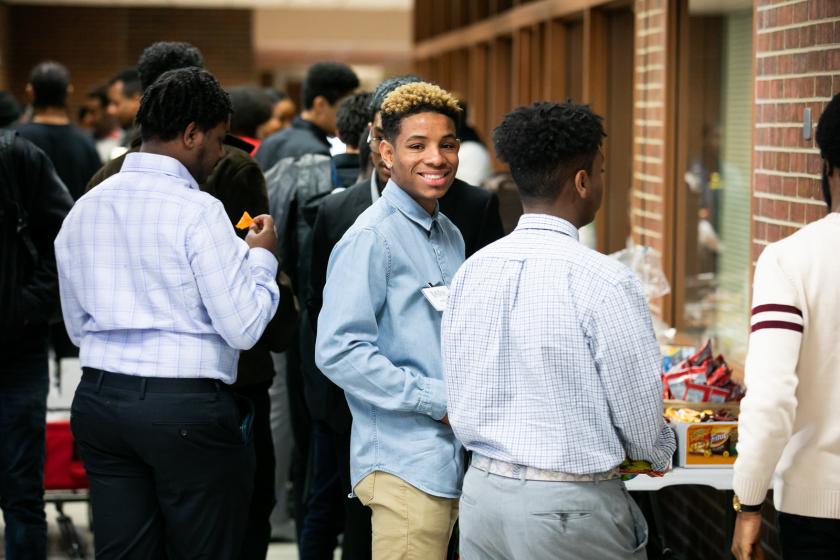 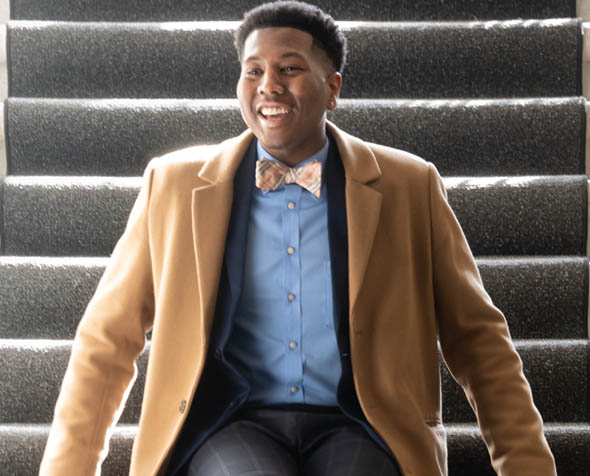 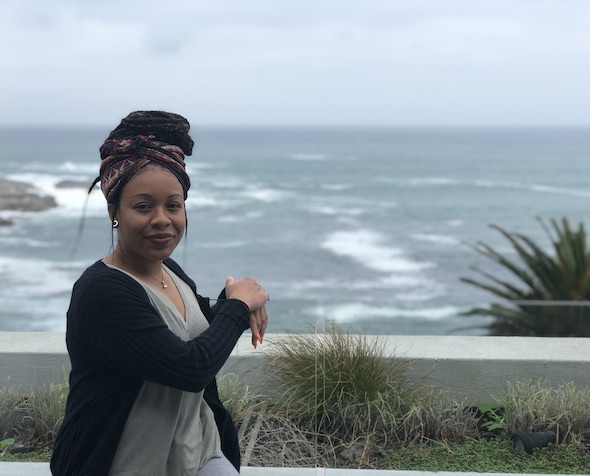