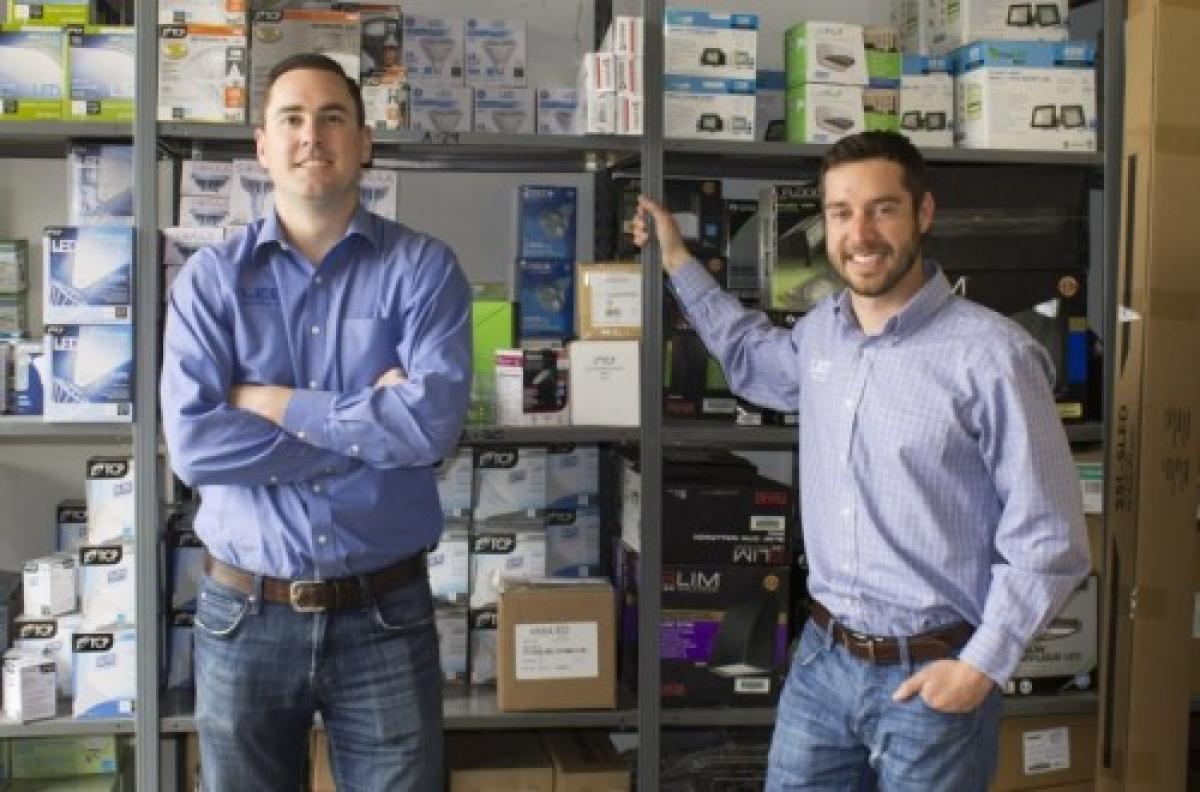 As fraternity brothers and students at the Daniels College of Business, Brian Stern (BSBA ’07) and Webb Lawrence (BSBA ’07) already knew that they would make great business partners one day. All they needed to do was find the right opportunity at the right time.

“We actually bounced a few crazy ideas off each other, until Brian had the idea to do this.” Stern, whose family ran a seafood importing business, saw the demand for efficient and durable LED lighting in the cold storage industry. In college, Stern learned he had a way with numbers and financial models, while Lawrence discovered his gift for salesmanship, successfully selling radio advertising. “I was hired to sell advertising for a local radio station with a signal that could not be heard in downtown Denver, not an easy sale.” So in 2009, unshaken by the recession, the new graduates decided to take the leap of faith and enter an industry they knew almost nothing about: the LED lighting industry.

“Really, it just starts with a vision,” Stern says. “You have an idea for a product and then you figure out how to do it.” During the early days of the business, they spent countless hours at Stern’s kitchen table on late night conference calls with overseas vendors, took apart nearly a hundred product samples and learned everything they could about the technical components of LED lights. “Our motto when we started was just to outwork the competition. Once we learned that there was competition out there.”

You’ll be surprised at how much you learn and how many paths to success there are. Just don’t be afraid to take that leap. Brian Stern, president of LED Supply Co.

During the first two years they realized that competing with companies like Philips and GE, along with their impressive engineering budgets, was a tough and unlikely path to success. Instead they pivoted and became a distributor, using the knowledge gained from prototyping and component research to sell LED lighting to the same manufacturers they had tried to compete with. While the manufacturers were employing sales reps and agents to sell anything from HID (High-Intensity Discharge) technology to fluorescents, this brand-new startup offered to sell LED lighting exclusively and better than the competition. They succeeded; their technical expertise and sales acumen gained the duo contracts with Philips, GE, and Cooper Lighting right off the bat. Selling multiple and competing brands was unheard of in lighting distribution, but the company’s laser focus on the product they understood best was the competitive edge they needed to reach new heights.

This year, LED Supply is expected to reach $14 million in revenue. Inc. Magazine ranked them as a top 100 fastest growing private company in 2015 and Denver Business Journal published a story on this tremendous growth shortly thereafter. They have purchased their first building and will be onboarding their 18th employee in just a few weeks. But the two partners rarely reflect on the success that they have had, instead they are always looking for the next opportunity. When one of their top sales guys told them that the girl he was in love with was moving to San Diego, they used this as an opportunity to open up a West Coast office. A business connection that worked for Excel Energy in Eau Claire, Wis. wanted to get into the lighting industry, so he opened up their first Midwest location. They are on the verge of launching their eCommerce platform to attract businesses from across the country and they have patented their first product; a wireless mass notification system that opened up a business segment so promising that it granted a brief return to their engineering roots. “Our core business is still growing pretty dramatically and we’re still spending a lot of our time on that. And then there are opportunities that present themselves and I think it’s the same for any new company: you have to take those opportunities and act on them,” Stern says.

What the numbers don’t reveal is that the road to success was rocky. Starting a business during the recession made it impossible to secure a loan during the first four years. The realization that large manufacturing companies could take them out of business forced them to adapt their vision. Despite what they described as a naïve start to their endeavors, Stern says they agree on one thing: new graduates that are thinking about starting a business should not be afraid to jump in the deep end. “You’ll be surprised at how much you learn and how many paths to success there are. Just don’t be afraid to take that leap.”