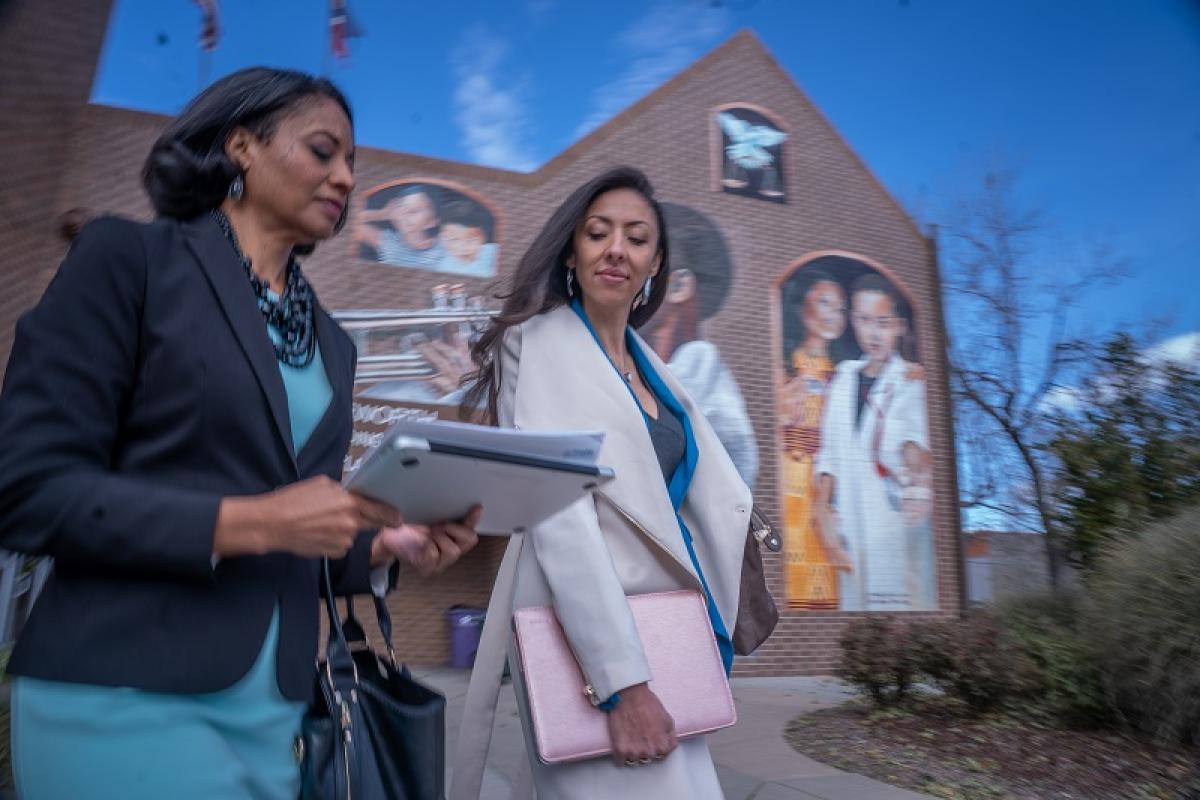 This article appears in the Winter 2020 issue of University of Denver Magazine.

There’s the Candi CdeBaca you might have read about. The one who fought tooth and nail against an I-70 reconstruction project. The one who turned heads by blatantly picking a fight with capitalism. The one who has earned the moniker “the AOC of Denver,” a nod to New York Congresswoman Alexandria Ocasio-Cortez.

Then there’s the Candi CdeBaca nervously making notes before a Denver City Council meeting. For the first time in her young career, it’s her turn to introduce the motions on the agenda, “and I’m scared,” she says, before clenching her teeth and letting out a soft, high-pitched, “eeeeeeee!”

The truth, the 33-year-old CdeBaca explains, is that despite an eye-catching campaign that unseated a two-term city councilman, she doesn’t like the spotlight. She doesn’t like to raise her voice.

“I see people look at me [in meetings], and it looks like they’re waiting for me to say something,” says CdeBaca (BA, MSW ’09). “I think people who saw me stepping into this space expected me to be how they saw me in those brief moments in the news and in debates.

“I don’t want to have to be loud or disruptive,” she continues. “But we just get pushed into corners so often that there’s no other option.”

Growing up in Denver’s Elyria-Swansea neighborhood — a diverse, industrial, polluted area on the city’s northwest side — CdeBaca found herself in the corner more often than not. By age 10, she was sweeping the floor of a convenience store to bring in extra cash for her impoverished family. Her single mother lost both of her legs to diabetes, and CdeBaca and her two younger siblings were raised primarily by her grandmothers and great-grandmother. Diabetes would diminish her grandmother’s health, too, and at age 14, CdeBaca would become the family’s primary caretaker.

When CdeBaca talks about her childhood, she talks about teary arguments at the Social Security office, fighting for food stamps and health care. She remembers how she had to scratch, claw and, sometimes, stretch the truth to secure the benefits that helped them survive.

“Watching a lot of my family members fall victim to so many different external circumstances really forced me to push through,” says CdeBaca, who saw school as her escape. She would become valedictorian at Manual High School and the first in her family to earn a high school diploma. “My mom just completely gave up [following her amputations], my brother is in prison, my sister, I don’t even know where she is at this point. In a lot of ways, who I am is built on who I didn’t want to be.”

Of all the careers CdeBaca considered, politician was perhaps furthest from her mind. But it certainly wasn’t a leap for a woman with such a firm grasp on the community.

She established herself as an activist, creating Project VOYCE, a community nonprofit focused on education, shortly after graduating high school. And she was one of the loudest voices opposing the Central 70 Project, a $1.3 billion highway expansion and redevelopment that will carve its way through the neighborhood she calls home.

But the thought of running for elected office never crossed her mind. Instead, for years, she lobbied other community leaders to challenge the incumbent councilman in her district. When no one else stepped up, CdeBaca says, she did what she had to do — become a voice for her overlooked community. Too often in the past, she says, city leaders and corporate interests had overruled the desires of her neighbors. As a member of the council, she pledged, the city would hear the district’s concerns about pollution, housing development, living wages, and transparency and accountability in government. In the same neighborhood, Lisa Calderón was waging a similar fight. Like CdeBaca, she was suing the Colorado Department of Transportation over the I-70 expansion and feeling increasingly neglected by city leaders. But campaigning for an election was the last thing she wanted to do. Politics, she says, was not her arena.

“Typical politicians are groomed for positions of power,” says Calderón (MLS ’01). “For women, that’s not our trajectory. We look at the needs of our communities and our families.”

But the longer she thought about it, the more Calderón felt called to raise her voice. She decided she had no option but to challenge Denver’s two-time incumbent mayor, Michael Hancock. Her campaign called for equity, openness in government and a seat at the table for a community she felt had been pushed aside. 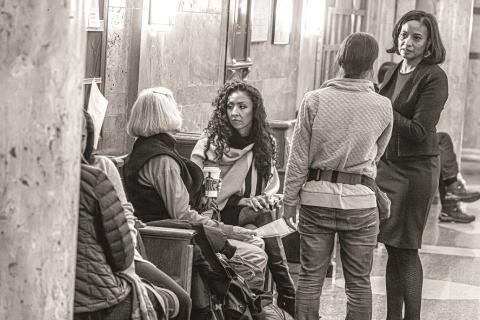 “The communities we grew up in were being displaced,” she says. “They weren’t prioritized. Their voices weren’t being heard. We decided to do something about it before our communities disappeared.”

Though a generation ahead of CdeBaca, Calderón grew up in a similar fashion. She shared a tight, multigenerational bond with her family on the city’s northwest side. Despite living in poverty and briefly dropping out of high school, Calderón would eventually attend and graduate college as a young single mother. She would become a college professor and nonprofit executive before jumping into the mayoral race.

While Calderón would fall short in her 2019 mayoral bid, CdeBaca would pull off arguably the biggest upset of the local election cycle. And she would do it in one of Denver’s most multifaceted districts. Although District 9 spans prosperous LoDo and City Park, as well as historic Five Points and oft-neglected Elyria Swansea, CdeBaca won with an unabashedly anti-establishment, anti-capitalist platform — views that garnered national attention, particularly on big-name conservative news sites and blogs like Breitbart. Her views, however, resonated among her neighbors. 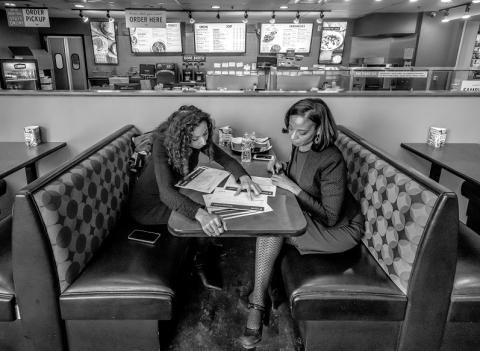 “They both clearly established themselves as the leaders of the new progressive movement in Denver,” says Eric Sonderman, an independent political analyst. “This is a town that rarely ejects incumbents from city council, and yet this time out, three [incumbents] were defeated. That’s just unprecedented.”

Also unprecedented, Sonderman says, is the powerful dynamic created when CdeBaca took office and invited Calderón to be her chief of staff. “I would refer to Lisa Calderón as sort of a super staff person,” he says. “She’s not an elected official, but she’s clearly had more clout and influence than the typical council staffer. She can be a thought partner for Candi, not just someone who executes what Candi wants to execute.”

At first, CdeBaca was hesitant to recruit Calderón as her chief of staff. She worried it would seem like an insult. Calderón, for her part, was looking for other jobs — some of them out of state. But the pair couldn’t pass up the opportunity to reshape Denver together.

“I think with Lisa, it was clear to me that nobody else had more skin in the game,” CdeBaca says. “I have to have someone who feels the same intensity of love and urgency that I feel. Nobody else that I could find could even compare to Lisa.” In so many ways, CdeBaca and Calderón feel cut from the same cloth. They share a desire to make Denver a more welcoming, equitable place that serves its marginalized populations. Each comes from a Latino family. They grew up in similar circumstances in similar communities, and both hold degrees from the University of Denver.

Calderón, 51, earned a master’s in liberal studies from University College. CdeBaca commuted to DU after transferring home from the University of San Diego. In just four years, she earned a bachelor’s degree in sociology and became the first and youngest person to go through the Graduate School of Social Work’s dual degree program. 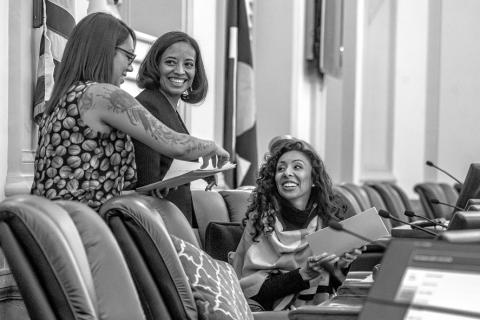 “When she left DU, she used the tools we taught her and really applied that lens to think about some of the issues affecting her community,” Martinez says. “I can see the influence of her DU education, but she also brought so much of her smarts and her background into that work.”

For their part, neither CdeBaca nor Calderón think back on their time on campus as particularly easy. Both say they felt out of place as female college students of color.

On campus, they sought out spaces where they felt most at home. Calderón formed a tight relationship with then-professor Vincent Harding, a civil rights activist who taught religion and social transformation. CdeBaca, meanwhile, found jobs at Colorado Women’s College, the DU Latino Center for Community Engagement and Scholarship and the Center for Multicultural Excellence.

“[DU] wasn’t a space made for us,” CdeBaca says, “so I had to find the little pockets that met the needs of my different social identities.” What makes CdeBaca and Calderón capable leaders, according to Nola Miguel, director of the Globeville Elyria-Swansea Coalition, is the way they understand the nuances of one of Denver’s most diverse districts.

“When Candi decided to run, it was a mixed feeling,” Miguel says, “because in some ways we didn’t want to lose her at the community level. But as she built that momentum, it was a huge game-changer for us, to have someone you feel really represents you. It felt like democracy. She has deep roots in so many areas of the neighborhood.”

Both women credit their upbringings with deepening their perspective. Growing up with her great-grandparents, CdeBaca learned to see the community through their eyes. Calderón, too, often thinks back to her family’s stories of historical redlining and racism in Denver’s past.

“I see myself more as a vessel of bringing all those people and experiences through these doors of power,” Calderón says. “We’re never alone. We’re bringing our ancestors with us.”

Generations of oppression and frustration have only emboldened CdeBaca and Calderón and encouraged them to raise their voices. And, according to Sonderman, the political analyst, it’s causing some disruption. On the council, he says, they’re forcing debates on items that once passed easily. 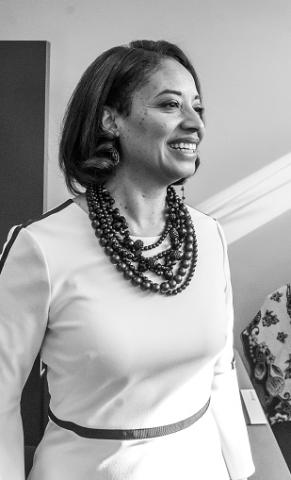 Their persistence has already had its successes. Denver ended contracts with two for-profit prison companies after CdeBaca plucked the item out of the consent agenda. She also ignited a debate by proposing that Denver’s sheriff be elected instead of appointed, to make the position more accountable to the citizens it serves.

Even as they settle into their new roles, CdeBaca and Calderón are still getting used to the feeling that comes with entering the Denver City and County Building. They still feel like outsiders. They notice people scatter as they walk the halls.

In some ways, they say, that feels great. They’re forces to be reckoned with. Difference-makers.

“But on the other side,” CdeBaca says, “it’s so heavy. Every day that I walk in, I tell everyone ‘I’m so scared.’ My stomach, my body, I always just feel the weight of the role. I know how many people are watching and counting on me to do something and change the way it is.”

Calderón feels it too.

“It’s the weight of the role and the expectations,” she says. “We don’t want to fail our community.”

The pundits say CdeBaca and Calderón have a lot to learn. Campaigning is one thing; making measurable change is another. They tell CdeBaca she will have to pick her battles. She can’t fight every fight.

CdeBaca can’t count how many times she’s heard that.

“I laugh when people try to discourage us from fighting little fights,” she says. “The institution wants us to get tired or complacent.”

She glances down at a 6-ounce cup of chicken noodle soup. At 6:45 p.m., it’s the first thing she’s eaten all day, which is normal. Childhood trained her to go without, not knowing when or how big her next meal would be.

“I laugh,” she repeats, “because when have I ever had the luxury of picking my battles?”