When you are coming off a season with only six wins, it’s easy for expectations for the upcoming season to be low. However, that’s not the case for the University of Denver women’s basketball team and new head coach Jim Turgeon.

Turgeon comes to DU from Colorado State University-Pueblo, where he spent the last two seasons compiling a 54-10 record, the highest of any coach in school history. Prior to CSU-Pueblo, he spent eight seasons at Iowa Western Community College, where he tallied a record of 191-65. Turgeon knows that to turn things around at DU, he has to start with changing the culture.

“Our whole motto is: Play hard, play smart, play together,” he says. “I think we can get that play hard and play together down; that playing smart might take us awhile, but we are getting there.”

Playing better team defense has been a major emphasis for Turgeon. Last year the Pioneers allowed more points than any other team in the Summit League. 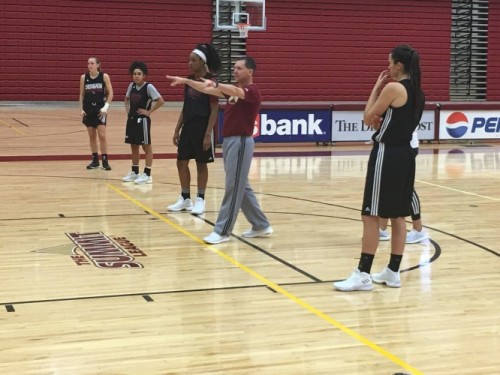 “Coach Turgeon came in knowing that we needed a lot of help on defense, especially playing man-to-man,” says junior guard Samantha Romanowski. “Right now, we just want to be mentally tough and physically tough. We have a lot more improvement to do, but that’s like every team at this point.”

Better defense, combined with a more up-tempo offense, could be exactly what the Pioneers need to develop a new culture of winning. However, no matter what the score is at the end of the night, no matter the team’s record when the season is over, Turgeon knows there has not been a lack of effort.

“Let’s support these girls,” Turgeon says. “They are good students, they are good people, and they are working extremely hard. I don’t know how many games we are going to win this year, but I think people will see the difference in how hard we play and how well we play together.”

To watch a preview of the men's basketball team, please click here.