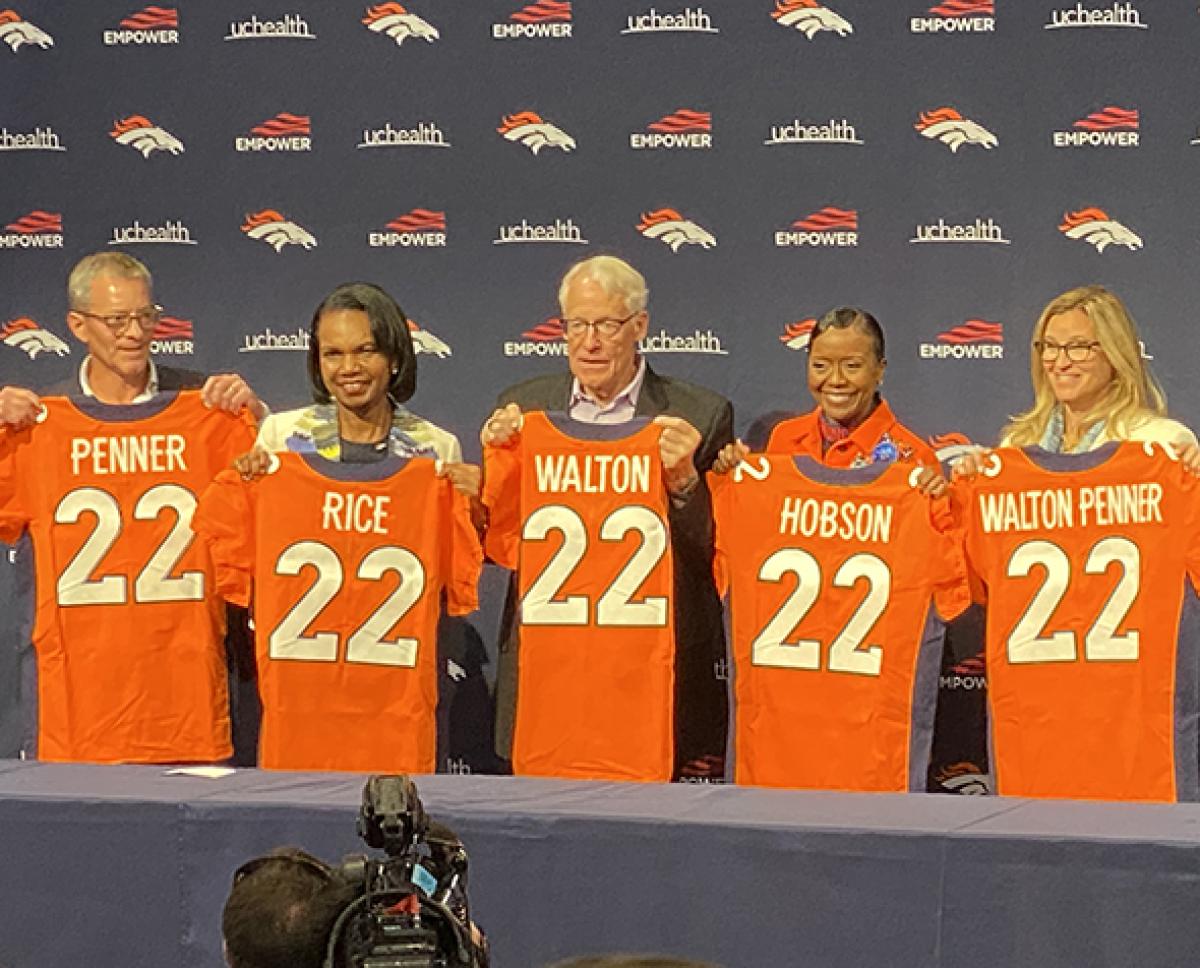 When Condoleezza Rice was figuring out her passions at the University of Denver during the ’70s, it was the height of the Orange Crush era for the Denver Broncos.

Orange Crush soda cans were stacked up in grocery stores, she recalled, with the cardboard likenesses of star players Rubin Carter or Louis Wright peering over them.

Rice (BA ’74, PhD ’81, Hon. PhD ’96) conjured up those memories last week when she was introduced at the Broncos’ team headquarters in Dove Valley as part of the Walton-Penner ownership group that purchased the team for $4.65 billion.

Rice’s father was a high school football coach in Alabama near the beginning of a career that took him across the country—including to the University of Denver as a professor and assistant vice chancellor. He later worked with members of the Stanford University football team.

During the Aug. 10 Broncos’ introductory press conference, the former secretary of state quipped that her father expected her “to be his All-American linebacker.”

“When he got a girl, he decided to teach her about [football] instead,” she said. “Even though my father has gone to the Lord, I have to think that today he’s thinking, ‘She finally got a really important job.’”

Rice was the 66th United States secretary of state, serving from 2005 to 2009—the first Black woman to hold that position. She also was the first woman to serve as national security advisor.

Rice has long held connections to football, including as a member of the College Football Playoff committee in 2013. At the time, Rice told ESPN she watched roughly 14 to 15 games each Saturday, then more recorded contests on Sunday. In 2018, ESPN NFL insider Adam Schefter tweeted that Rice was being considered as a candidate for head coach of the Cleveland Browns.

Throughout that time, she’s remained connected to several NFL clubs, including the Broncos.

While Rice was pursuing her master’s degree, the Broncos reached Super Bowl XII following the 1977 season, where they lost to the Dallas Cowboys, kicking off a run of seven Super Bowl appearances under the ownership of Pat Bowlen (a former member of DU’s Board of Trustees).

Bowlen battled Alzheimer’s disease and in 2014 relinquished control of the team. He died in 2019, spurring a search for a new owner.

Walmart heir Rob Walton heads the Walton-Penner ownership group and says Rice’s background and passion for football make her a slam-dunk addition to the team.

“A highly respected public servant, accomplished academic and corporate leader, Secretary Rice is well known as a passionate and knowledgeable football fan who has worked to make the sport stronger and better,” the Walton-Penner group writes in a statement. “Her unique experience and extraordinary judgment will be a great benefit to our group and the Broncos organization.”

Above all, Rice said she’s excited to work with a franchise so ingrained in the fabric of Denver.