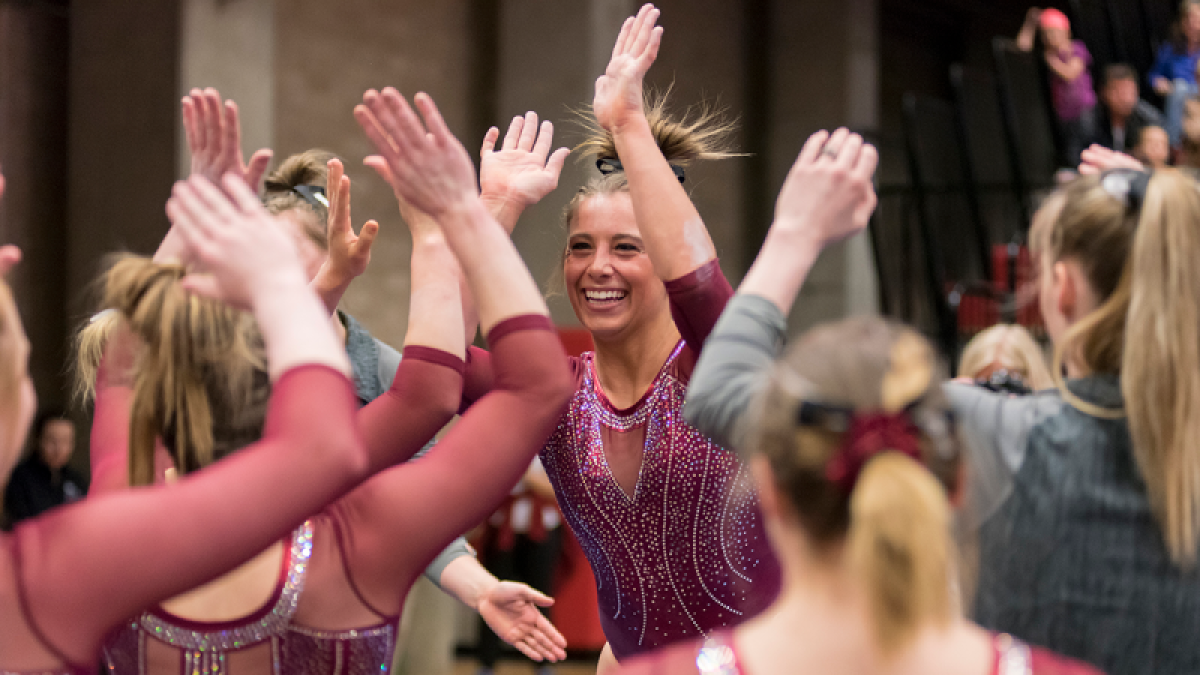 When you walk into the University of Denver’s gymnastics facility, it’s hard not to sense the confidence in the room. Perhaps it’s because team members know they have unfinished business from last year — the Pioneers barely missed qualifying for the NCAA National Championships. Perhaps it comes from feeling disrespected by the 2019 preseason ranking — 13th in the country. Or perhaps it’s simply because the student-athletes know they have the potential to prove any doubters wrong.

For the Pioneers, any conversation about a date with the national championships begins with Maddie Karr. Last year, as a sophomore, she became the first DU gymnast ever to finish the season nationally ranked in all four events and in the all-around. Karr has already put that accomplishment in perspective and is focusing on what she can do to help the team improve in 2019.

“That was really one of my goals before coming to the University of Denver,” Karr says. “To have already accomplished that is really great, but our team still has a lot of unfinished business.”

A lot of work has already gone in to addressing that unfinished business. It started with the student-athletes staying in town this summer to work on building greater consistency with their off-season training program. Team members believe this has helped them with their overall health and has provided a head start in their preparation.

“Last year serves as our biggest motivator,” Lynnzee Brown says. “We are definitely a team that learns from what has happened in the past and uses it to fuel our future.”

As a freshman last year, Brown was the only Pioneer to compete in the NCAA National Championships. She finished tied for 20th overall on bars.

“We are definitely talking about where our team is at compared to this time last year,” she says. “We are much further ahead at this point, and that automatically puts us in a better position to succeed in the future.”

Fans have noticed the hard work and continued success that the team has had. Last season, the gymnasts set a new all-time attendance record for an individual meet with more than 4,600 fans. For the season, they averaged more than 2,700 fans per meet, the second-highest average in program history.

“It is one of the most rewarding things for our student-athletes,” says Melissa Kutcher-Rinehart, who has coached the program since 1999 and has led Denver to 20 consecutive appearances at the NCAA regionals. “We cannot be any more blessed to have a great community of club gymnastics here in the state of Colorado. The people who do come out and enjoy our meets want to come back again.”

The energy that the crowd brings to each meet is something the athletes feed off of when competing in their routines.

“It’s very exciting, and everyone enjoys competing in front of a large crowd,” Karr says. “We’ve done a good job going out in the community, to the club gyms, to help drive support for our program. It shows that our hard work is paying off.”

That hard work will be tested early for the Pioneers. The team opens the season this weekend on the road in a meet that features two teams ranked in the top 20 — Michigan (No. 6) and Alabama (No. 18). Kutcher-Rinehart says she would not want to start the season any other way.

“We are not going to get better unless we challenge ourselves and go against the top teams in the country.”