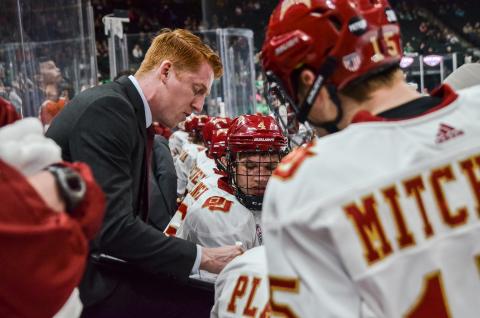 David Carle has been named Richard and Kitzia Goodman Head Coach of the University of Denver Pioneers, Vice Chancellor for Athletics, Recreation and Ritchie Center Operations Karlton Creech announced on Friday. Carle becomes the ninth head coach in the history of the program, replacing Jim Montgomery, who was named head coach of the Dallas Stars on May 4.

Carle will be formally introduced to the Denver and national media on May 29 at 2:30 p.m.

“We are excited today to announce David Carle as the next head hockey coach at the University of Denver,” Creech said. “David was the very first person that I talked with about the job and after a thorough search process, David earned this opportunity. During the process we received overwhelming positive support for David both internally and externally. His impeccable ethical reputation, intelligence, work ethic and strong relationship skills were the consistent themes in our evaluation. We look forward to many years of continued excellence in the hockey program under David’s leadership.”

Carle, 28, becomes the youngest active head coach in NCAA Division I college hockey. The Anchorage, Alaska native served the previous four-and-a-half seasons as an assistant coach with the Pioneers, joining the program on Jan. 1, 2014 following a season-and-a-half as an assistant coach with the Green Bay Gamblers of the United States Hockey League (USHL). Prior to joining the Gamblers, Carle served four seasons as a student assistant coach with the Pioneers after being diagnosed with hypertrophic cardiomyopathy, the primary disease of the myocardium muscle of the heart, and being forced to retire from his playing career. Carle graduated from the University of Denver in 2012.

“I am honored to be named the head coach of this historic program,” Carle said. “Having gone to school here I am very proud to represent our great institution as its next head hockey coach. We will continue, as we always have, to strive for excellence both on and off the ice. This is a very special day for my family, of which I would not be in this position without.”

During his tenure as an assistant coach with the Pioneers, Carle helped Denver to a 115-51-23 record, a 66-32-14-8 mark in the National Collegiate Hockey Conference (NCHC), one NCHC regular-season title, two NCHC Frozen Faceoff titles, five NCAA Tournament appearances, two Frozen Four appearances and the 2017 National Championship. While in Green Bay, Carle helped the Gamblers to a 37-23-4 record, a second-place finish in the USHL’s Eastern Conference and a franchise record 15-consecutive wins on home ice.

“David Carle is a very well-respected Pioneer alum who has a great knowledge base in collegiate hockey that will help him continue the legacy of head coach and program success at the University of Denver,” Director of Athletics Ron Grahame said.

As a player, Carle was a defenseman at Shattuck-St. Mary’s (Minn.), helping the Sabres capture back-to-back national titles in 2007 and 2008. He was selected by the Tampa Bay Lightning in the seventh Round of the 2008 NHL Entry Draft and recruited to play at Denver before receiving his diagnosis.