Portland, Ore., has long been renowned for having a great music scene. But on Saturday night a "new" song could be heard coming out of The Fields Bar and Grill near the Willamette River:

“Denver, our Denver, we sing to thee.”

After time expired and the Pioneers had fought off one last Minnesota-Duluth offensive thrust, alumni gathered at the bar treated the staff to a rendition of the fight song.

"Fairest of colleges ... give her three times three.”

Aside from watch parties in Denver and Frozen Four host city Chicago, 12 venues around the nation hosted gatherings for both the Thursday semifinal and Friday championship games. DU alumni engagement staff were on hand to lend assistance where necessary. It all made for a fun evening watching the Pioneers skate away with their eighth NCAA title.

For Brian Elizard, director of alumni engagement, investing resources in the Frozen Four was a no-brainer. “Inspired by the strategic plan and our chancellor's leadership, our goal was to leverage the unifying power of our spirit for hockey and show a collective enthusiasm from coast to coast.”

The parties were complemented by a #SkateFor8 social media challenge campaign, geared toward getting the word out among alumni and boosting attendance at the gatherings.

In San Francisco, it was about leaving a mark — literally. Jared Casner with the Bay Area Alumni Network noticed that the walls of the Mission District’s Kilowatt bar sported adorned the logos of the Detroit Red Wings and other teams.

“I was talking to the bartender about the turnout and support and asked if we could get our banner up alongside the other hockey banners. Without hesitation, the bartender said he knew exactly the spot for it.”

Arin Halicki (BSBA ’04) also attended the event at Kilowatt. She understands the value of camaraderie-filled events like watching the Frozen Four. “They're really important. They allow us to stay in touch with people and relate on a level that you can’t fulfill with professional networks.”

In Atlanta, if you heard a banging sound, it may have been Hawley Chester (BA ’69) figuratively losing his mind after Duluth’s second goal pulled them within striking distance of a tie. Seated at a center table alongside his wife, Penny, in a private viewing room, the cable executive takes Pioneer Hockey very seriously. He tried out for the varsity team in the 1960s.

“I went to training camp having not actually played for a couple years but thought that I would be a candidate to play,” Chester said. “At the first day of training camp I realized that I had a ways to go!”

Still, Chester played on a Pioneer freshman squad, participating in a couple of matches against Colorado College that, he says, devolved into “riots.” He also practiced with the varsity team and formed a close relationship with legendary coach Murray Armstrong, who led the Pioneers to five of their eight hockey championships.

He hopes the national title, which he describes as “gut-wrenchingly hard,” will fire up alumni and lead to further Pioneer success.

That seems to be a priority for alumni. “Our investment in recruiting and supporting local alumni leaders coupled with our inventive #SkateFor8 fan initiative to drive awareness were key differences in the dramatic numbers we saw in terms of attendance compared with last year," Elizardi said. 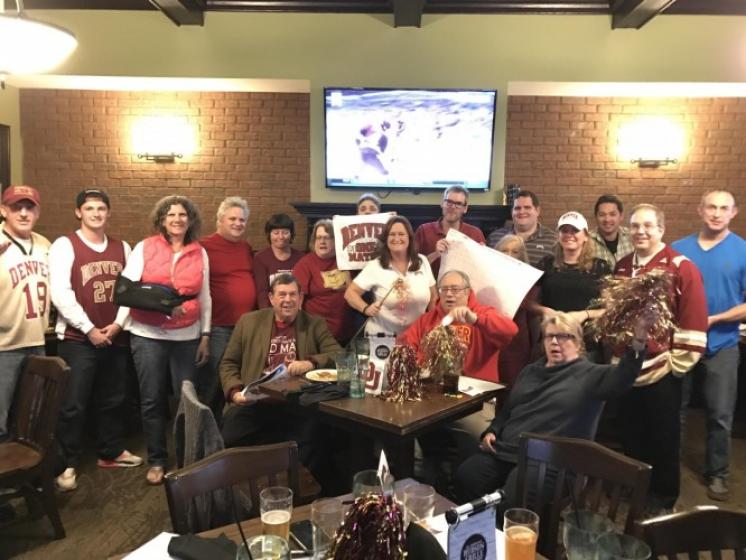 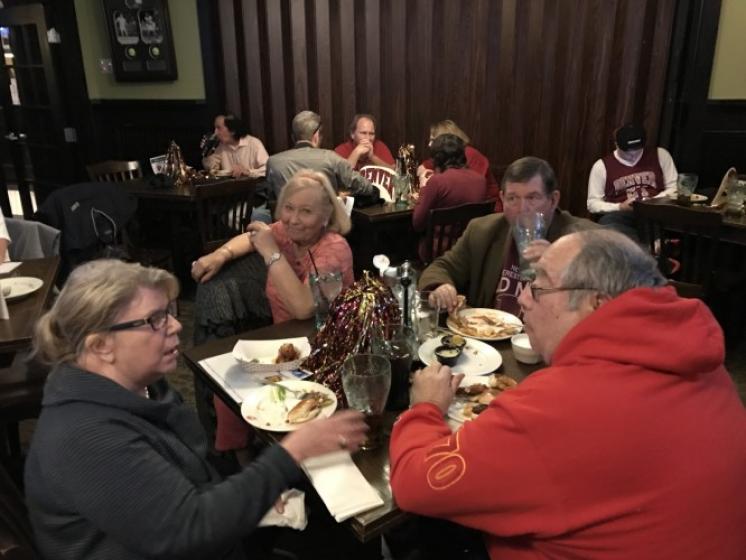 Hawley Chester is pictured drinking from a cup.