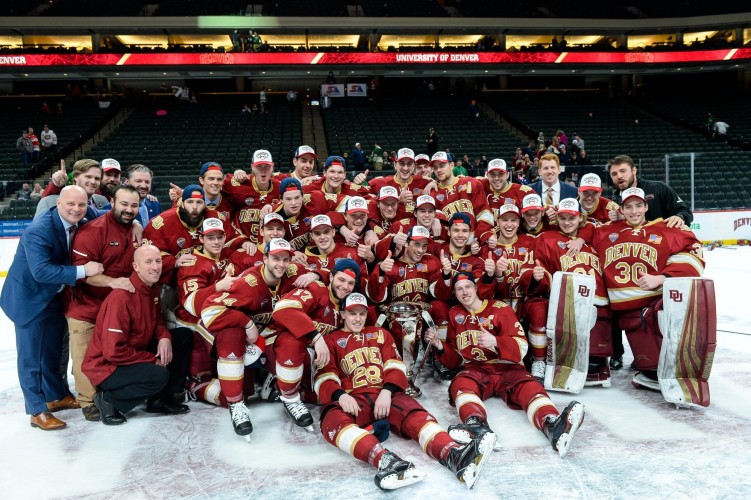 The University of Denver is playing its best hockey when it matters most. The Pioneers put together their longest winning streak of the season on the way to claiming the 2018 National Collegiate Hockey Conference (NCHC) Frozen Faceoff championship this past weekend in St. Paul, Minn.

DU defeated St. Cloud State by building a lead early and playing great defense throughout. The Huskies only goal came with about four minutes remaining in the game, but it was too little too late as the Pioneers won 4-1.

“I’m really proud of our group,” said Jim Montgomery, the Richard and Kitzia Goodman head coach. “I thought we were relentless. After we scored the first goal we really started to play Denver hockey. We were very persistent, very hard offensively and defensively, and we were able to push our lead because of it.” 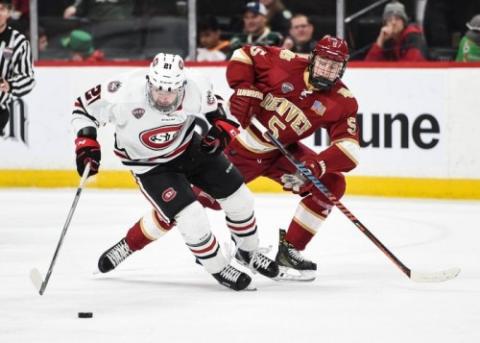 The Pioneers need their hot streak to continue next weekend when the NCAA Tournament gets underway. DU has received a No. 2 seed in the Midwest region and will play No. 3 seed Penn State on Saturday. The two teams met in the tournament last year, with the Pioneers winning 6-3 on their way to a national championship. Denver knows they face a different challenge this year because the game will be played in Allentown, Pa., located less than three hours away from the Penn State campus.

“We know a little bit about Penn State from last year,” Montgomery says. “They’ve had a really good year. We are going to have to face the adversity of playing a team in their home area and it’s going to be all Nittany Lion fans, but that’s going to be a good challenge for us.”

Saturday night’s game against Penn State begins at 5 p.m. MT and can be seen on ESPN3. The winner of that game will play either Ohio St. or Princeton on Sunday with the winner advancing to the Frozen Four.

The University of Denver women’s gymnastics wrapped up its regular season on Friday night posting its highest road score of the season. The 196.725 points was enough to beat Iowa State, but fell short of No. 11 Arkansas. The Pioneers tied a program record on the bars with a team score of 49.450. They were led by sophomore Maddie Karr who tied her career high on the bars with a 9.950.

“We hit on the road during finals week, which shows a lot of strength and character with our team,” said head coach Melissa Kutcher-Rinehart on Friday night. “Certainly, there is room to improve, but it was our strongest road performance to date and we get to improve our Regional Qualifying Score.”

Denver begins its postseason on Saturday at the Big 12 Championships. The No. 15 ranked Pioneers will face Iowa State, West Virginia and No. 1 ranked Oklahoma.