DU Alumnus is the New Voice of the Denver Broncos 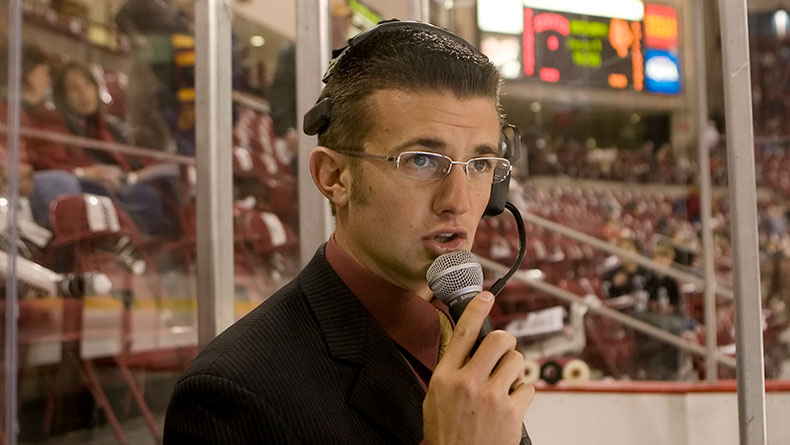 For most Coloradans, Sundays in the fall are synonymous with one thing — Broncos football. But for DU alumnus Conor McGahey (BA ’07), Denver home games take on an extra significance. Beginning this fall, McGahey will be the public address announcer for the Denver Broncos.

“I’m the voice that everyone will hear inside the stadium for public address reads and pass completions,” says McGahey, whose goal in his new role is to keep the focus on the players. “I’m not the star of the show by any means; that happens on the field. I view my role as a smaller one, and I want to do it accurately to make sure everyone enjoys the game as much as possible.”

McGahey got his start while a junior at DU announcing Pioneer hockey games during the fall. When the Colorado Avalanche played an inter-squad game in Magness Arena, McGahey was asked to announce for the game. It provided something of a break. “That opportunity led to me backing up [longtime Broncos and Avalanche announcer] Alan Roach,” says McGahey, who then began working full time for the Avs in 2009.

He also recalls other announcing highlights early in his career that led to new opportunities. When the regular Buffs announcer, Alan Cass, was sick, McGahey got to call an exciting game in 2007 between the University of Colorado and then No. 3 Oklahoma, which ended with the Buffs kicking a game-winning field goal.

McGahey has been the announcer for Saturday CU games since 2011, and will continue to do so when his new role with the Broncos begins. Despite the impressive matchups coming to Mile High Stadium this year, McGahey isn’t anticipating any games in particular.

“I look forward to all of them,” he says. “Every Sunday is a unique and special time in Denver.”