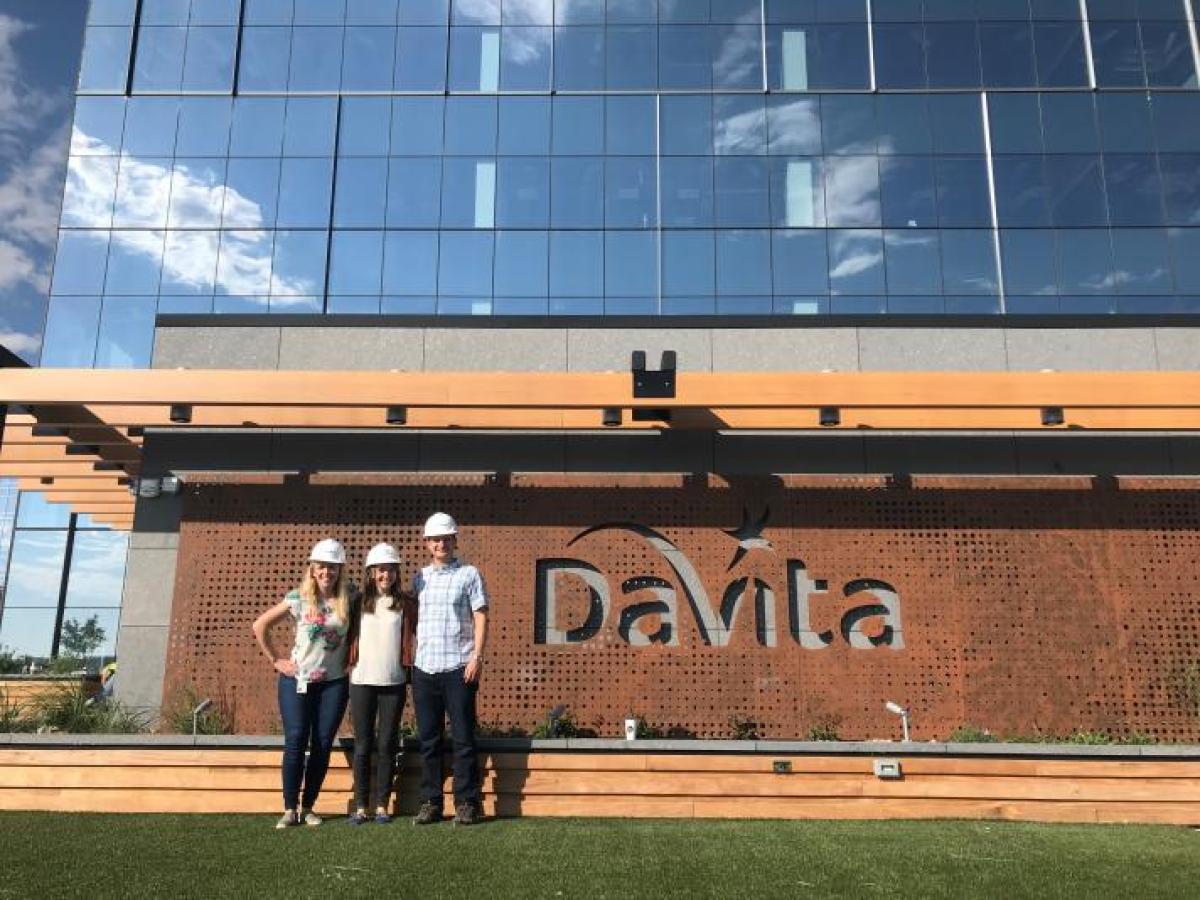 Many of the figures that describe Denver-based DaVita Inc. are too high to count: 75,000 teammates at 2,600 locations in 11 countries. But one of its most impactful numbers is quite small—just three.

That’s the number of members clocking time behind the scenes as DaVita’s sustainability team. Two of its members, sustainability manager Casey Stock (MS ’17) and sustainability coordinator Julia Richards (BS ’16) count themselves as part of another team: DU alumni.

Both work to help DaVita do its part in chipping away at the planet’s towering environmental problems.

“If you look at the bigger picture, it can be overwhelming and fairly doom and gloom,” Richards says. “Yes, [climate change] is happening, and it’s true we need to address it, but what can we do on a more tangible level so that it’s not an existential problem.”

When the corporation’s sustainability program was founded in 2007, it was simply considered the right thing to do for the planet and the DaVita community. The results already speak for themselves. The company recently opened a second headquarters in downtown Denver that is on track to secure at least LEED Silver rating in line with the company’s 2020 environmental goals.  In addition, volunteer environmental advocates, dubbed Green Champions, have trickled down throughout the organization, sowing the seeds of sustainability into the fabric of the company.

Five years ago, Stock cooked up DaVita’s Earth Day Village Service Day, encouraging teammates around the globe to get out of the office each April to complete an Earth-friendly service project. “We just finished our fifth Earth Day Service Day and have accrued more than 38,000 volunteer hours over the course of five years,” Stock says. “It is one of the most fulfilling things to see pictures from teammates in India or Poland or Brazil having Earth Day events.”

Today, the program is a collaborative effort among the sustainability team, and it is one of Richards’ favorites as well. “This last year, we tracked metrics around the environmental impact of our events,” she says. “We had over 2,700 trees and plants planted—basically one for every volunteer we had. … It’s just a cool way to feel a sense of community in such a large organization.”

Stock, who graduated from DU's University College with a master’s degree in environmental policy and management in 2017, initially envisioned a much different career for herself. She started her undergraduate degree interested in math before pivoting to environmental studies. “During one of my introductory lab classes in environmental science, I remember consciously thinking it would be amazing if I could use a degree as a vehicle to change the world,” she recalls.

Growing up outside Boulder and attending a sustainability-focused college for her undergraduate degree, Stock saw environmentally conscious lifestyles as the norm. “To realize what I experienced and how I grew up was not the norm—that fueled my passion.”

She brings that passion and her mathematical mind to DaVita. “I think [math] taught me to challenge the status quo, and that’s what’s really embedded into the core of sustainability,” she says. “Like with math, there’s no one way to solve a problem.”

Richards received her undergraduate degree in environmental science from DU in 2016. Her intense interest in sustainability was a core tenet of her education, too. She helped relocate DU’s community garden, introduce hydroponic growing towers to campus and address food insecurity through her work with DU’s Center for Sustainability. She also co-chaired the Undergraduate Student Government sustainability committee and served as the vice president of Students for Sustainable Food.

Like Stock, Richards was attracted to the chance to put her degree into action. “I really enjoyed the environmental science education I got, and sustainability is a tangible way to apply that in a broader context,” she says.

An incremental push toward actionable change, inadequate though it may sometimes feel, is crucial to the success of sustainability efforts, says Richards. “Take an inventory of where your biggest impact is and then work to improve that,” she explains. “If you travel a lot for work for example, you might not have a lot of control over that, but you might be able to offset one trip a year. It’s just about finding practical solutions.”

While Richards focuses on small actions, Stock focuses on small victories. “What has kept me engaged and fulfilled is these tiny wins at work, whether it’s a new building that just hit a new certification or seeing that this matters to our leadership,” Stock says. “Those tiny wins keep us in the game.”