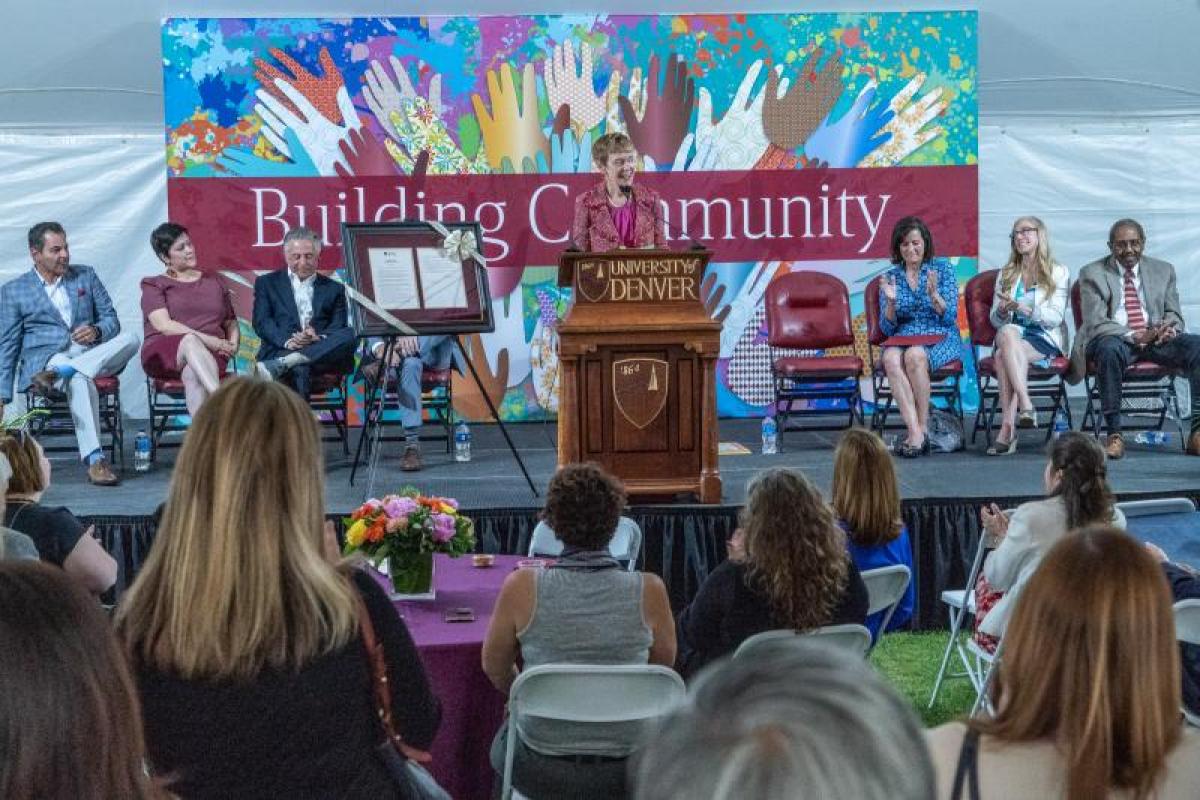 Yesterday, more than 500 members of the community came together to celebrate Rebecca Chopp and her five years as chancellor of the University of Denver. The gathering comes after Chopp’s April announcement that she would be stepping down as chancellor in July due to serious health concerns.

The event included remarks from many at DU, including Board Chair Denise O’Leary and Provost and Executive Vice Chancellor Jeremy Haefner. Messages ranged from the countless accomplishments Chopp has made during her tenure, including the strategic plan, DU IMPACT 2025 and the Denver Advantage Campus Framework Plan, to her guidance and counsel as colleague and friend. She [Rebecca] is the “light” – which seemed to be the theme for many when describing Chopp – from O’Leary, who quoted a sentiment from the Kitlinuharmiut peoples of northern Alaska and Canada to David Greenberg, vice chancellor for Institutional Partnerships, who quoted Leonard Cohen’s “Anthem”:

Ring the bells that still can ring.

There is a crack in everything.

That’s how the light gets in.

During the program O’Leary welcomed Chopp to the stage to read the Board of Trustees’ resolution approving the appointment of Rebecca S. Chopp as Chancellor Emerita effective July 15, 2019. Chopp will continue as a special advisor after July and said she looks forward to having the time to attend faculty and student events. 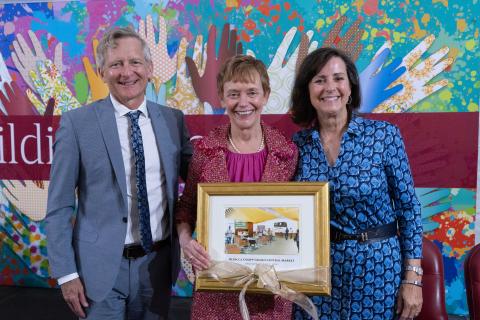 It is clear that Chopp’s vision for DU will continue. Her intentionality around access and building community are a key part of her legacy, a legacy that will be embodied in the Community Commons’ central dining hall. As part of the celebration, Vice Chancellor of Advancement Armin Afsahi and Liliana Rodriguez, vice chancellor of Campus Life and Inclusive Excellence, unveiled the Rebecca Chopp Grand Central Market. It was a fitting dedication to a leader who believes in bringing people together around shared meals and conversation.

Chopp closed the event with her own final words to the community about celebration, learning and appreciation and noted that for her, life “has always been a journey of learning.” Chopp added, chuckling, that her husband Fred says she’s never really graduated.

She shared her thanks with the Board, faculty, staff, students and greater community before ending with words from one of her favorite poets, Emily Dickinson:

That it will never come again is what makes life sweet. Dwell in possibility. Find ecstasy in life; the mere sense of living is joy enough.

After 38 years in higher education and DU’s 18th and first female chancellor, Chopp said, “thank you, all, for bringing so much joy into my life these past five years.”