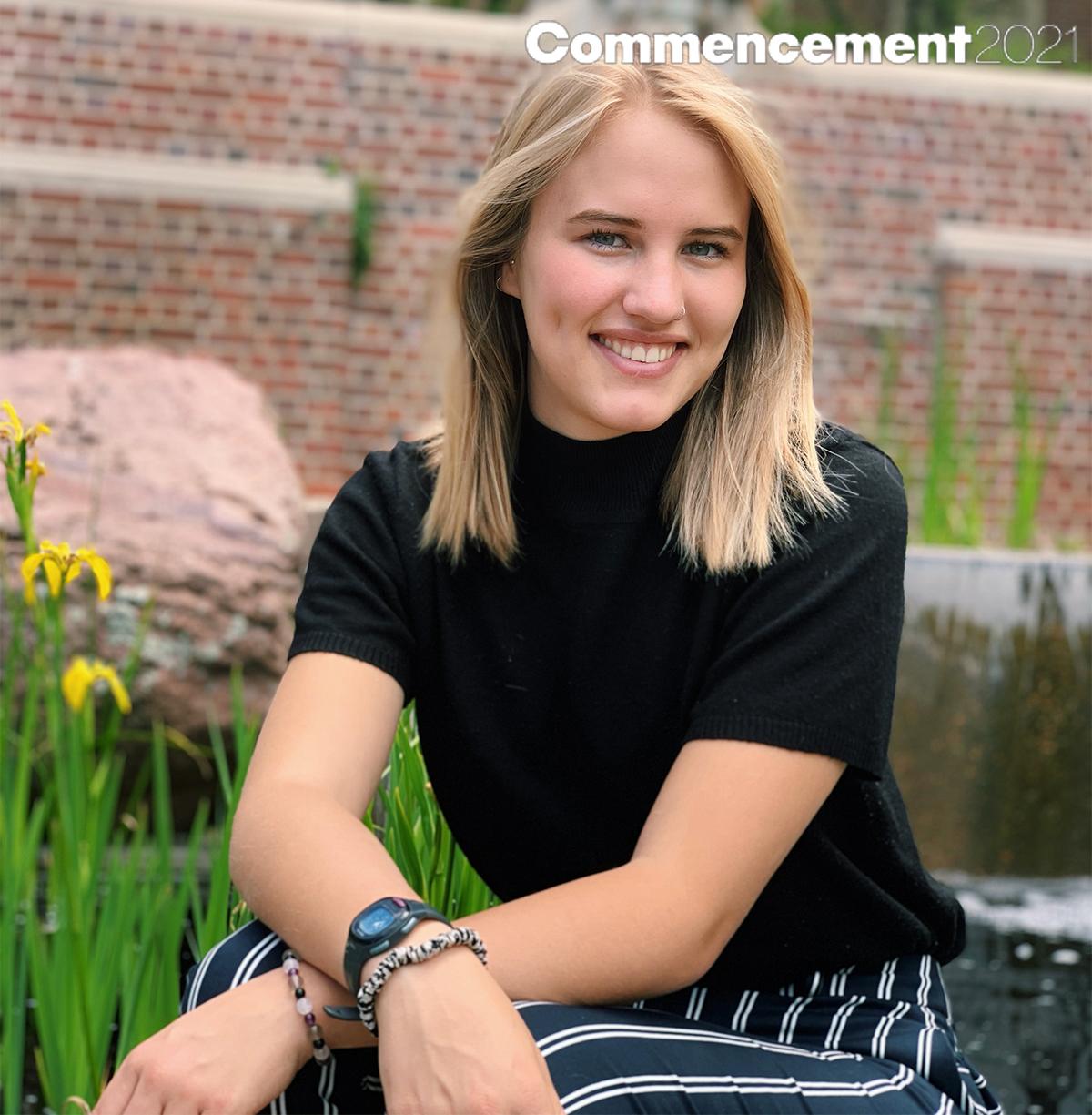 Since her very first day on campus, Stella Brown has been helping the University of Denver inch toward its sustainability goals.

The recent DU graduate, who earned her bachelor’s degree in international studies and Spanish, with minors in physics and sustainability in March, started her university career in the Center for Sustainability’s internship program. She spent all four years working in the center, eventually becoming undergraduate energy team lead, an opportunity that allowed her to concentrate on reducing energy usage across campus and beyond.

While the center offered a fun, upbeat community of likeminded students that sustained Brown through her four years at DU, it also offered the chance to do something bigger — to foster critical change.

“I think as a young person, it’s pretty evident that things in our natural environment are changing with weird weather patterns and increasing air pollution, even in Denver,” Brown says. “We can’t continue forward the way we are in this fossil-fuel reliant and consumer-driven economy. We’re creating so much waste, and it’s not going to just disappear. I think it’s just important, that as people my age and other younger generations move in, that more and more jobs and businesses are looking toward not just the bottom line, but also our planet’s future.”

Brown found her niche in energy-focused work. Through her role with the center’s energy team, she had the ear of the broader DU community and used that power to educate. One of the energy team’s signature events is its quarterly open mic night, which bring students together for music, comedy and poetry performances, accented with energy efficiency tips and tricks.

“It is a way to get a lot of kids who would maybe be in their own dorm rooms, using energy all throughout campus separately, into one area. So that in itself saves some energy,” Brown says. “And then we use it as a platform to talk about good energy habits — things like unplugging your power strips from your wall, unplugging your lights, unplugging your appliances, shutting your curtains to keep heat in in the winter or keeping it open to have the sunlight heat up your room a little bit — just small things that especially could apply to a dorm room.”

Last spring, the pandemic put a halt to in-person events, forcing Brown and her team to get creative. They closed out the academic year with a virtual open mic night via Instagram and gained University approval to host a small in-person gathering once campus opened again.

“We did that outdoors this fall at the Dimond Family Residential Village. They have that big green space in between the wings of the dorms, which was really fun,” Brown explains. “It was cool to be able to use that space, and we wanted to have it there so freshmen could open up their windows and see what was happening.”

She served on the USG’s sustainability committee from her freshman year on and was chair of the committee during her final year at DU. Through this work, she helped allocate the University’s “green fund” to sustainability-focused projects. Most recently, that included drafting a proposal alongside Chad King, DU’s executive director of sustainability, for a partnership with an app called PIPS, or Positive Impact Points, that allows students to earn points for such sustainable acts as taking public transportation and then redeem them for rewards.

Fresh off of her graduation, Brown is looking to the future. She plans to spend the next year teaching English in Spain to hone her Spanish skills. After that, she hopes to put her four years of sustainability experience to work, building a better world.

“There’s a huge potential and needs to shift our energy systems away from nonrenewables to renewables,” she says. “I’d love to be a part of that work."