For the third consecutive year, the team enters the season ranked inside top 10 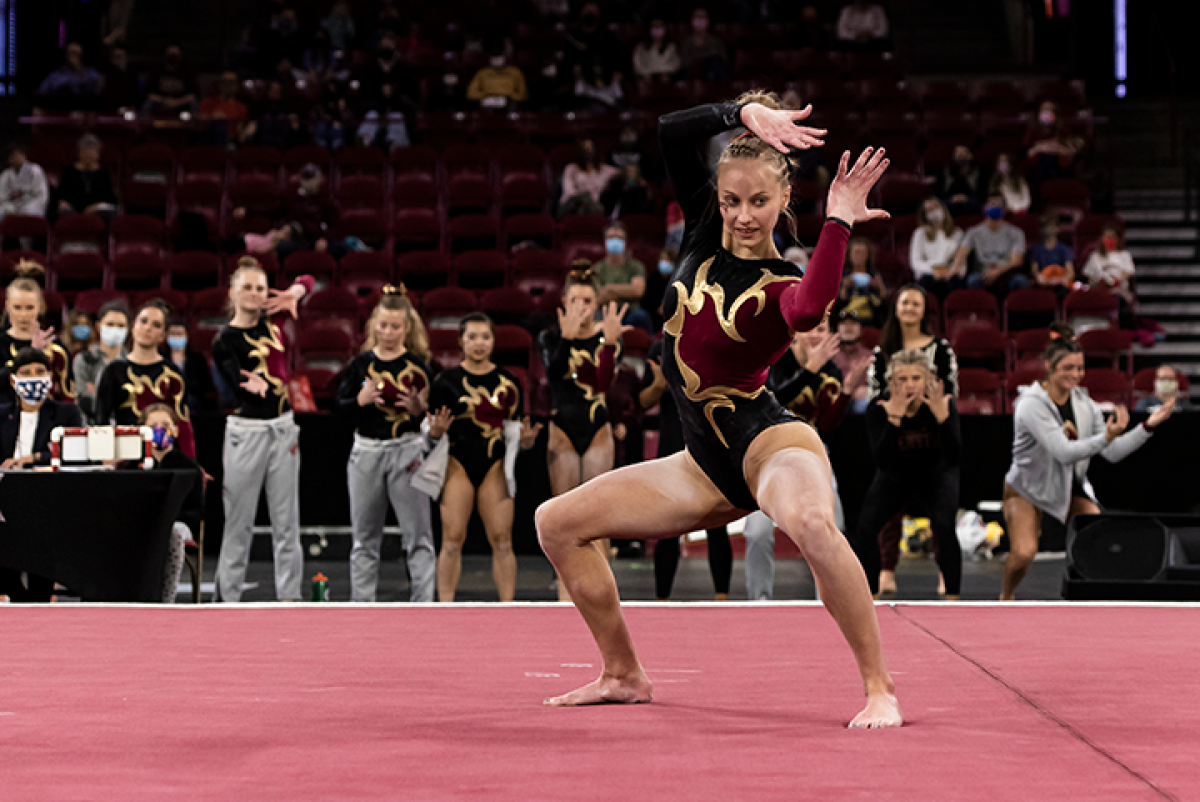 When University of Denver gymnastics opens its season this weekend in Magness Arena, it will be the first time in two years that fans will be back in the stands without capacity restrictions. Considering what the team experienced last year, it will be a welcome sight.

“It was difficult last year going from home meets where there were no fans, and then we would go to a school in a different state and they would have fans,” says head coach Melissa Kutcher-Rinehart. “We are really looking forward to having our fans, friends, alumni, supporters and everyone come back this year to support the team.”

For fans who thought they would never see last year’s senior class compete again, there’s great news. Mia Sundstrom, Emily Glynn and Lynnzee Brown all return to the team as graduate students, thanks to an extra year of eligibility granted by the NCAA in recognition of the impact due to the COVID-19 pandemic. The three join senior and team captain Alexandria Ruiz as the leaders of an experienced squad ready to repeat the feat of their 2021 Big 12 championship and compete for a national championship.

“Emily, Lynnzee and Mia do a great job of keeping our lineups competitive, which helps push us in the gym to be the best athletes that we can be. It motivates everyone to be at their best,” Ruiz says. “I am really able to learn from them, and they are always willing to help me. And I am grateful for their support.”

The seasoned veterans have also been helpful to the team’s seven younger gymnasts, who are either preparing for their first year of college competition or are back after a freshman year disrupted and distorted by COVID.

“We are thankful to have them back, because we know what our team goals are. We know what we want to accomplish, and we know we need them,” says sophomore Jessica Hutchinson. “Not only do they strengthen our lineups, but they also push everyone to work harder.”

Work in the gym this offseason has also been easier than during last year’s anything-but-ordinary season.

“There were a lot of unknowns. At times I didn’t know if we were going to compete or what the competitions were going to look like,” Ruiz says. “This year we were able to train in the summer; we had our full preseason, and that really builds our confidence, knowing that we have done all the work and we are really prepared.”

Kutcher-Rinehart has been pleased by the team’s hard work and says if they can remain healthy and stay in the moment, there’s no reason why they can’t be in contention for a championship.

“From what I’ve seen this fall, everyone is incredibly hard-working, dedicated to excellence, and pushing to get better each and every day,” she says. “There is nothing that leads me to believe that we can’t be successful.”