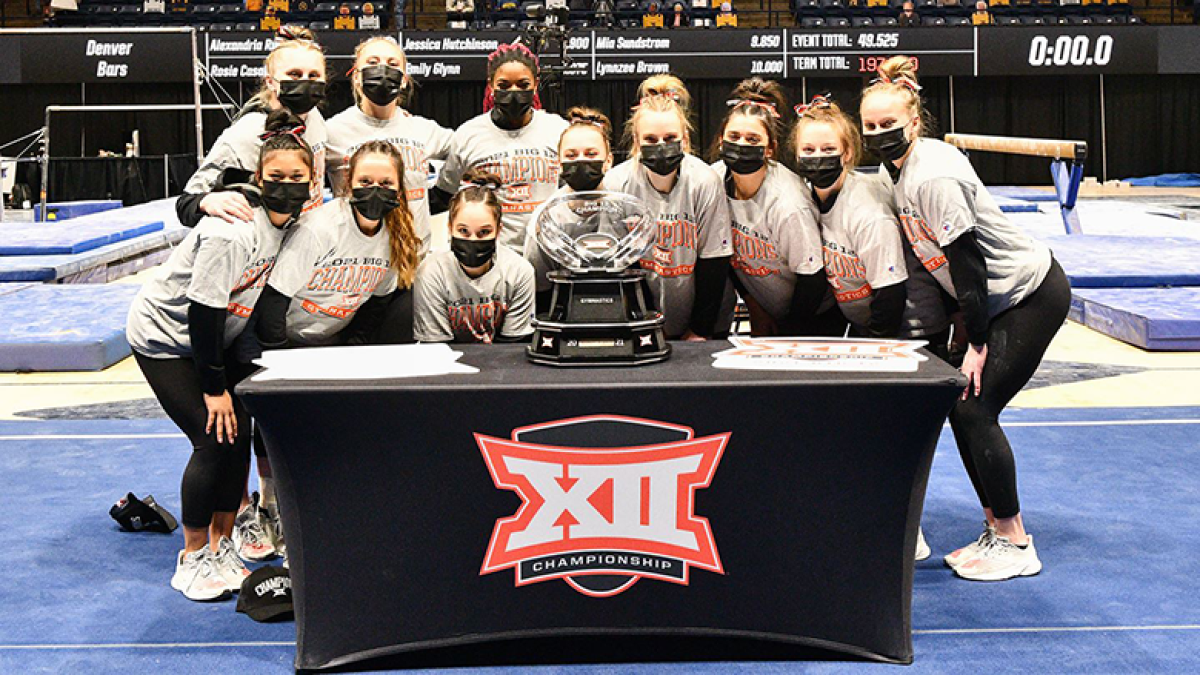 Spring 2020: The University of Denver gymnastics team was only two weeks away from competing for the Big 12 championship and returning to the NCAAs. Expectations were high, because the year prior, the team finished fourth in the country — the highest finish in program history. However, their highly promising season came to an abrupt end when the world shut down for COVID-19.

“It is strange to think that it has been two years and that it wasn’t just last year,” says head coach Melissa Kutcher-Rinehart, thinking back to her team’s last postseason experience and NCAA appearance.

This spring, postseason competition for the Pioneers started off where things ended in 2019. Denver surprised the country, and perhaps themselves, when they won the Big 12 championship, defeating the powerhouse University of Oklahoma squad, which logged its first loss since the 2018 NCAA National Tournament. It was the first time DU had defeated Oklahoma in 15 years. It was also DU’s first conference championship since joining one of the Power Five conferences (ACC, Big Ten, Big 12, Pac-12 and SEC) in 2016.

“Ever since I came into college, Oklahoma has been the No. 1 program in the country, and we always strive to compete with the best,” says senior Lynnzee Brown, who was named Big 12 Gymnast of the Year. “We’ve gotten so close to that mark several times and to finally do it is super exciting. In the moment I was doing it for Maddie (Karr), Nikole (Addison), Nina (McGee) and all the people who were on this team that worked so hard to build the culture and this program to what it is today.”

Denver was tied with Oklahoma heading into the final rotation on bars. All the gymnasts hit their routine, including Brown’s perfect 10.0 and senior Mia Sundstrom’s 9.850. It was the first time Sundstrom had competed on bars in more than a year, after dislocating her elbow while competing on the same event in 2020.

“I’ve had so much training, and I trust my coaches and trainers so much in the recovery process that when that moment came, I was completely ready, and there was not a doubt in my mind as far as injuries or performance,” Sundstrom says. “It’s been a goal for us for so long to beat Oklahoma. In that moment, it was about us staying grounded and just trusting our training and trusting our gymnastics.”

“Championship season is awesome. It’s a challenge, and we’re ready for it,” Sundstrom says. “I think we will give the tough competition the level of respect that it deserves, and at the same time we will stay in our bubble and just do our job. If we do our job, then we are going to be just fine.”

The team believes the adversity it has faced this season has prepared them for the challenge of this weekend. Beyond the difficulty of competing amidst a pandemic, injuries have plagued DU this year. Denver has not had consistent lineups the entire season, and underclassmen have been called upon to compete. Kutcher-Rinehart believes this could now be an advantage heading into the toughest competition of the season.

“Student-athletes have had to step up, get experience, compete, be tough, be accountable and come through,” she says. “We are peaking at the right time for everyone to feel confident about their gymnastics. It’s about what we do; we can’t burden ourselves with who we are facing and what they are ranked.”