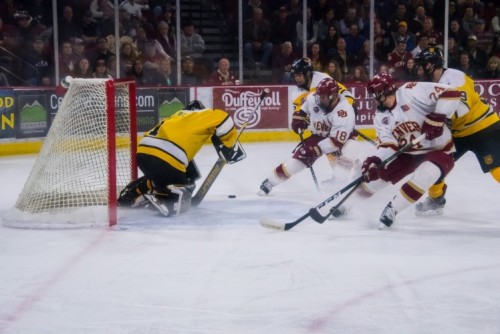 There’s little doubt the DU men’s hockey team picked the right time to get hot. This weekend, the Pioneers swept Colorado College to advance to the NCHC Frozen Faceoff. The University of Denver has now won 13 consecutive games, the best streak in the NCAA. The feat also tied the team for the fourth-longest single-season streak in DU history.

“It’s great to end our home schedule with a good team win like this, and we’re looking forward to the challenge of competing for another Frozen Faceoff title next weekend in Minneapolis,” said head coach Jim Montgomery after Saturday night’s victory.

Denver will face North Dakota Friday night in the semifinals. The winner of that game will play either Minnesota-Duluth or Western Michigan in the championship game on Saturday night. All games will be televised nationally on CBS Sports Network.

DU and North Dakota faced off twice earlier in the year. The two teams tied in the first game and the Pioneers won the second, with a final score of 3-2.

The men’s lacrosse team is once again ranked first in the country in both major polls. The Pioneers defeated previously top-ranked Notre Dame 11-10 on Sunday with a game-winning shot as time expired.

Up next, the team heads out on the road for the first time this season to take on 18th ranked Ohio State. 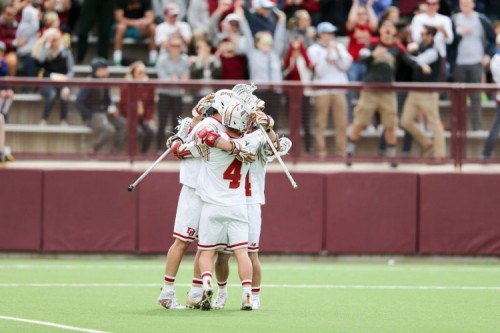 The women’s gymnastics team moved up one spot to No. 7. This matches the program’s highest-ever RQS (Regional Qualifying Scores) ranking, set earlier this season, as well as the second-highest ranking at any point in the season. The Pioneers continue to hold national rankings on all four events, including three in the top 10.