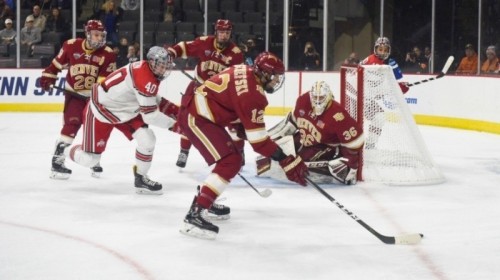 The Buckeyes topped the Pioneers 5-1 to advance to the Frozen Four, ending DU’s season.

“I thought we came out and we were ready. I thought our effort was really good tonight,” said DU head coach Jim Montgomery. “We just have to tip our hats to Ohio State. They were better than us tonight in every facet.”

The Pioneers outshot the Buckeyes and had more power play chances but still found themselves on the wrong end of the scoreboard.

After a scoreless first period, Ohio State built a 3-0 lead midway through the third frame. Sophomore Tyson McLellan’s redirection put DU on the board with nine minutes to go, but the Buckeyes struck back 30 seconds later to put the game on ice.

“We tried everything in the book to get going, and it just didn’t work,” said senior defenseman Tariq Hammond. “They beat us.”

“Four young student-athletes that came here as freshmen and the growth in them as people, players and leaders, I can’t thank them enough for what they’ve done for our program,” Montgomery said. “The true sign of character is leaving a place better than when you arrived. That’s what they did for the University of Denver and Denver hockey.”

Forward Troy Terry and defenseman Ian Mitchell were named to the all-tournament team. 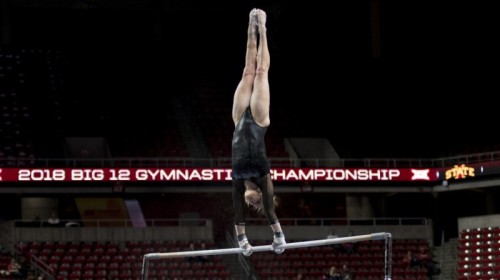 Posting its highest road score of the season, the University of Denver women’s gymnastics team finished second at the Big 12 Championships Saturday.

The result propels the No. 13 Pioneers into their 20th consecutive NCAA Regionals Tournament.

"We said we wanted to peak toward the end of the year, and we’re doing that," head coach Melissa Kutcher-Rinehart said. “We’ve been gaining momentum every meet as the end of the year has approached. We’ll still continue to refine our performance before Regionals, but I’m impressed with the team’s competitive nature and mental toughness.”

Sophomore Maddie Karr finished second in the all-around and the Pioneers posted a school-record score of 49.475 on bars.

Karr, junior Kaitlyn Schou and freshman Emily Glynn were named to the all-Big 12 Championship team, while freshman Lynnzee Brown was named Big 12 co-Newcomer of the Year. 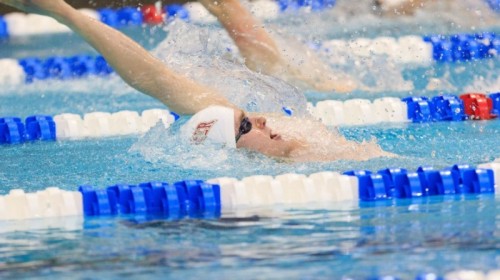 The University of Denver men’s swimming and diving program finished 22nd at the NCAA Championships — its best Division I result since 1962.

Senior Anton Loncar led the team with a sixth-place finish in the 200 back stroke and earned his fifth All-American honor.