Among the new citizens in attendance was Prasad Pakkal, a DU alum 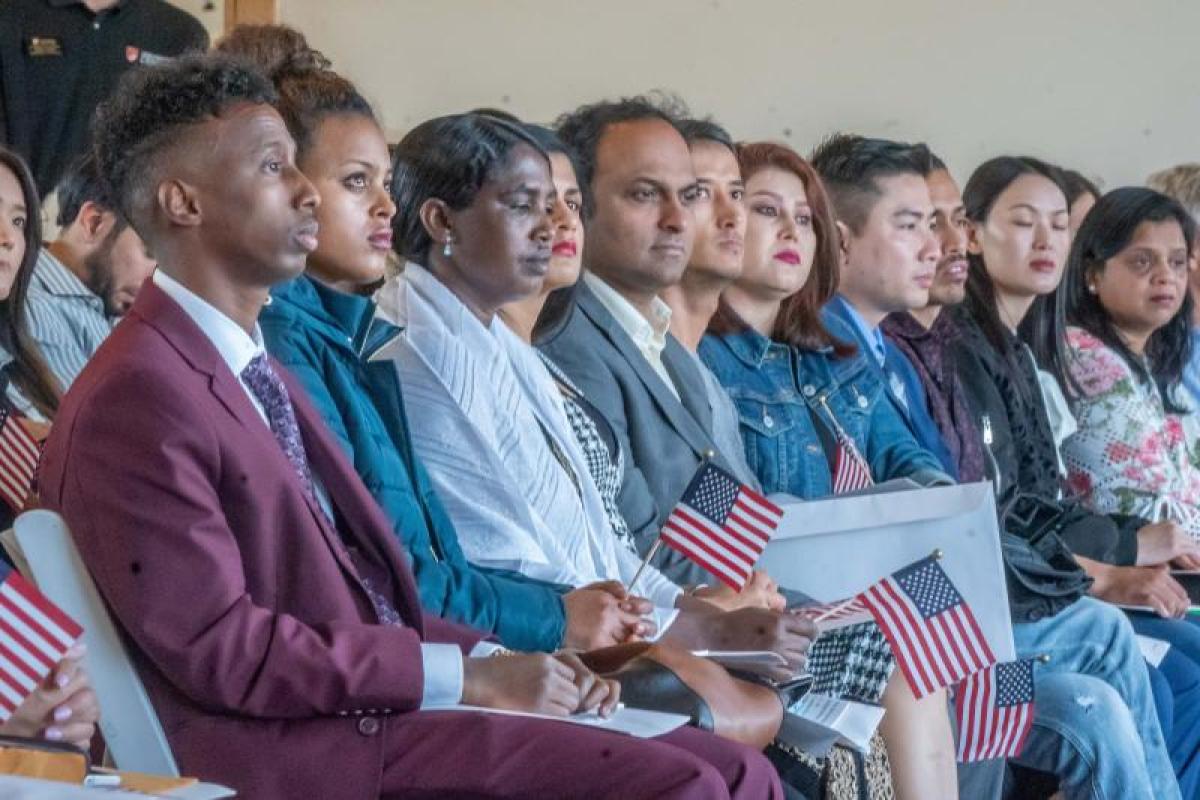 In 2003, Prasad Pakkal made his way to Denver from his home in Southern India to attend the University of Denver. During his years at DU, he grew to love the city, saw his first snowfall and earned a master’s degree in electrical engineering.

Last week, Pakkal crossed off another milestone moment when he became a United States citizen at the University’s first naturalization ceremony. Pakkal joined 50 other new citizens at the Sie Complex’s Maglione Hall, where, flag in hand, he took the oath of citizenship alongside his wife. The two were cheered on by their young daughter, with whom they were excited to finally share a common citizenship.

Since earning his master’s degree, Pakkal has spent the past 14 years working as an engineer, but with only a green card, he was unable to apply for jobs in the defense field, freely travel internationally or vote. These, he says, are the things he’s most excited about exploring with his new U.S. citizenship.

“I came on a foreign student visa and from there, there were so many challenges in my life,” he explains. “I needed to find a job, then get a different visa, then transition to a green card, then to citizenship.”

Pakkal and his fellow participants represented 23 different countries, including Mexico, Eritrea, El Salvador, China, Somalia, Benin and Afghanistan. As they savored the ceremony, participants were asked not to leave their heritage behind, but to share it with their communities.

In addition to a “call of countries” and the oath of citizenship, attendees enjoyed a performance of the National Anthem by a Lamont School of Music student and joined together to say the Pledge of Allegiance before crossing the stage and posing with their certificates of naturalization.

For Fritz Mayer, dean of DU’s Josef Korbel School of International Studies, witnessing the culmination of the long, often difficult road to citizenship was a moving experience. “It was really heartwarming and reaffirming of what is really good about this country,” he says. “It was so great to see both the applicants and their families, and how proud they were, how excited they were and how meaningful this was to them.”

Mayer says Korbel’s partnership with the U.S. Citizenship and Immigration Services fits in with the school’s focus areas and community-centric mission. He hopes to continue the partnership and bring additional naturalization ceremonies to the University in the future to allow more students and community members the opportunity to witness this side of immigration.

“Much of what we hear about immigration these days is negative. … This was the opposite,” Mayer says. “This showed that immigrants aren’t some faceless mob trying to storm our borders — these are people with complex histories and lives.”

While the day was moving for all in attendance, it was a particularly big moment for the new citizens, who spent years wading through the process, passing tests and filing paperwork. Being back on the DU campus gave the moment special resonance for Pakkal.

“I’m kind of remembering the old days back in 2003 when I came here as a student,” he says. “It’s been an amazing journey — a lot of hurdles, but it’s been a wonderful journey with ups and downs. Getting my citizenship here is a little bit emotional.”