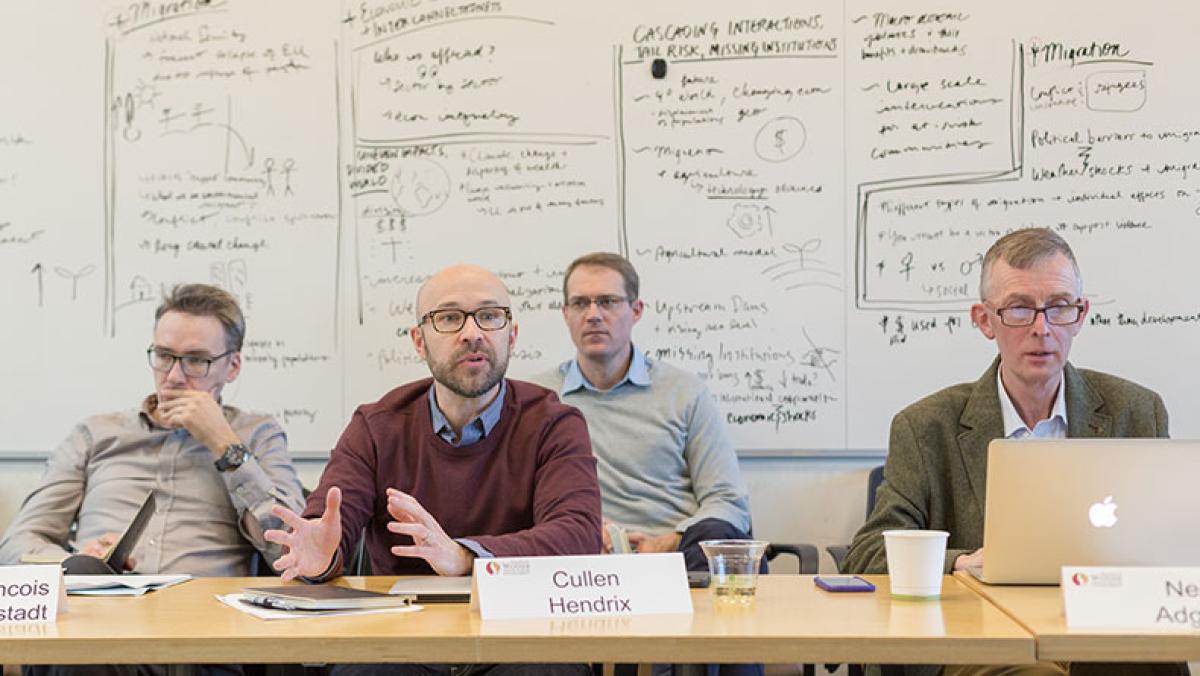 Conflict and climate change have been linked for decades, with Pentagon-commissioned studies predicting a range of dark scenarios — from shooting wars in South Asia and civil war in China to the breakup of the European Union.

Although climate change remains a significant threat to peace, the picture may not be quite so dire, says the University of Denver’s Cullen Hendrix, an associate professor in the Josef Korbel School of International Studies and director of the Sié Chéou-Kang Center for International Security and Diplomacy. He lent his expertise to a recently published study in the renowned scientific journal Nature.

The study, led by Katharine Mach of Stanford’s Woods Institute for the Environment, broke from the usual scientific sparring to instead find points of consensus among 12 climate change experts from political science, economics, anthropology and geography, among other disciplines.

The consensus emerged around three key points: Climate-related conflict risk is expected to increase; the past impact of climate change on conflict is less significant than the impact of other factors like low socioeconomic development; and experts still are not in agreement about the specific mechanisms by which climate change aggravates conflict.

“None of us really thought there was a high probability climate change would lead to a more peaceful world,” Hendrix says, but “if you were to go down the list of potential causes of conflict, you’d have to go down relatively far before you’d get to climate.”

That’s not to make light of the concerns at hand though, Hendrix says. “I think it’s a significant security risk both for the U.S. national security community and, when you get right down to it, the people living in marginalized parts of the developing world whose livelihoods and health are largely dependent on climate in a very real sense,” Hendrix says.

Already, the world has seen changing temperatures and weather patterns interfere with peace. In 2007, former U.N. Secretary General Ban Ki-moon called the high-profile conflict in Darfur and Sudan the first climate war, and many observers attribute the Syrian civil war to severe drought in the Fertile Crescent.

Conflicts like the one in Syria illustrate just how complex the relationship is, says Hendrix, and how much context matters. “It’s an authoritarian government; [it has] relatively poor policy responses to droughts and a high degree of political exclusion,” he explains. “You have all of those other important contextual factors that would predispose it to be a place where if you have this additional spark, conflict would likely occur.”

Just as interesting as the research itself, Hendrix says, is the way it came together — via a process known as expert elicitation. First, lead researchers Katharine Mach and Caroline Kraan of Stanford sought top climate change experts in North America and Europe and then conducted eight-hour, structured interviews with each of the 12 they identified.

They subsequently compiled nearly 1,000 pages of transcribed notes, undertook a lengthy review process and ultimately put the experts in a room together to hash out their findings. What resulted were clear points of consensus, even among scientists who have previously gone head-to-head in academic debate.

“That was a really gratifying process because most of the time you don’t really have that many opportunities to have that kind of synthetic discussion that’s based much more around the things we have in common rather than the things that separate us,” Hendrix says.

The study incorporated expertise across disciplines to lend varying voices to the debate. “If you have a bunch of different cuts coming from different perspectives and they are triangulating on … a consensus, we can be more confident that it is representative of multiple ways of knowing,” he explains. “That also means policymakers can look at this and see that it actually represents broad perspectives. This isn’t one narrow perspective from some narrow disciplinary kind of approach.”

The study also signals that more work remains if scholars are to understand the full ramifications of climate change on peace and stability. “To know something about solutions, we would need to know a lot more about the mechanisms. One of the things that’s left for us to do is to keep disentangling why we think this relationship exists,” Hendrix says.

His next project aims to do just that. Hendrix, along with partners at the One Earth Future Foundation’s Secure Fisheries program, will look at whether climate change and fish scarcity are contributing to a growing number of attacks on fishing boats and broader armed conflicts between countries.

By looking at smaller conflicts, Hendrix and other researchers hope to better understand the relationship between humans and climate. “We would like to think that we have been able to insulate ourselves from nature,” he says. “But at root, we are still inherently and fundamentally creatures of our environment.”