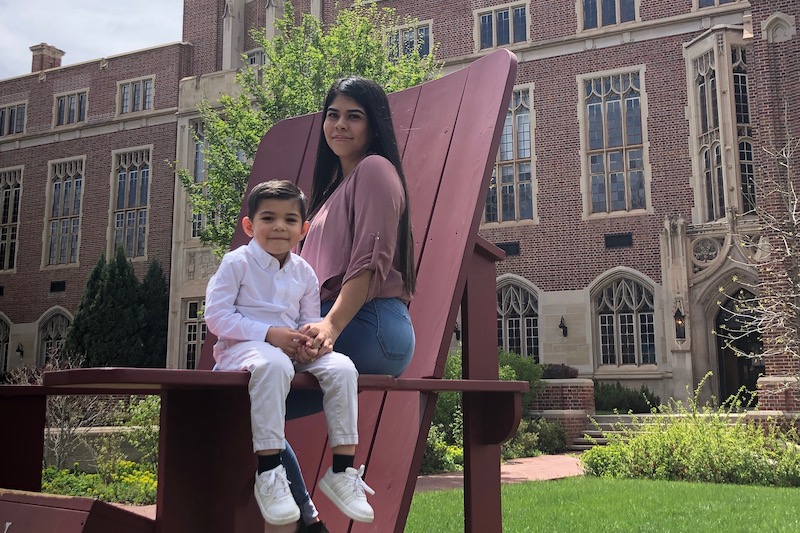 Lucero Cordova Arellanes is more than just a college student. She’s also a mother, a volunteer, a legal assistant, a future law school student and so much more.

During her time at the University of Denver, her days would start with dropping off her young son, Gael, at the Fisher Early Learning Center on campus, then heading off to a morning packed with classes for her sociology major and political science minor. In the afternoons, Arellanes worked part-time at an immigration law firm or volunteered at Casa de Paz — all in the interest of preparing for law school — and then finished her day in time to spend the evening with Gael.

After Arellanes graduates this quarter, she is off to the University of California Berkeley School of Law, supported by a full-tuition scholarship, to pursue her dream of becoming an immigration attorney.

“I’ve always been interested in immigration law,” Arellanes says. “My parents are immigrants, and my dad was deported when I was 16. A lot of my friends’ parents were also deported, and I grew up seeing that firsthand. I have a personal vested interest.”

Arellanes started college at Southwestern University in Texas, where she took her first class exploring structural inequality. That inspired her to study sociology.

“I was kind of hooked from there,” she says.

Because Arellanes wanted to be closer to family, she transferred to DU after her sophomore year and hit the ground running. She found a mentor in professor Lisa Martinez, who introduced her to the work of Casa de Paz, where Arellanes later volunteered and interned. Casa de Paz is a nonprofit that provides such resources as free housing, meals and transportation for immigrants released from detention centers, as well as support as they are reunited with their families. 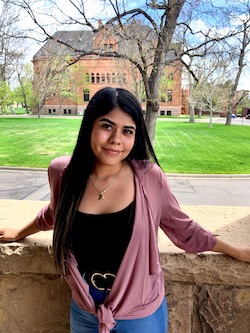 “The mentorship I got at DU from professors really helped me find my voice and really understand my passion better,” Arellanes says. “Professor Martinez had the biggest impact. Seeing that there were professors who were Latinos and interested in my success, that really made me feel like, ‘OK, I can do this.’”

Martinez has watched Arellanes grow over her years at DU.

“Lucero is an outstanding student, and I consider myself fortunate to have taught and learned from her these last two years,” Martinez says. “She is dedicated to doing important work that has real significance for underserved communities and has continually demonstrated a firm commitment to addressing the inequities she and others experience.”

With a goal of going to law school, Arellanes sought valuable experience by working part time as a legal assistant at a local immigration law firm. DU’s Sturm College of Law, she says, served as a valuable resource as she made her career decisions.

“No one in my immediate circle has ever gone to law school, so it was really powerful meeting Latinos at DU’s law school who are doing what I want to do and just knowing it’s a possibility,” Arellanes says. “My most immediate goal is to work directly with people and help them learn about the laws and resources available to them.”

Arellanes says transferring to DU allowed her to find her passion and meet amazing people along the way.

“I always go by the quote, ‘It takes a village,’” Arellanes says. “So find your village and hold on tightly to them because when you feel like you can’t do it, they are the ones that push you to keep going.”