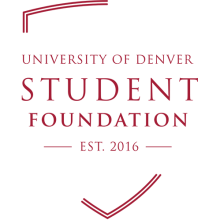 The University of Denver’s Student Foundation has received a prestigious national award recognizing its efforts to build a culture of philanthropy and giving among DU’s more than 12,000 undergraduate and graduate students.

The 2018 CASE Affiliated Student Advancement Programs award, given by the Council for Advancement and Support of Education at a conference in Kentucky, recognizes outstanding organizations and leaders in student philanthropy. Through the award, CASE has shined a light on the visionary innovation of DU’s Student Foundation (DUSF) in its efforts to provide meaningful opportunities for students to give to causes they care about and that help their peers. 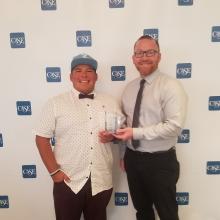 In the most recent academic year, a third of undergraduates at DU gave to causes and programs at the University.

The CASE award recognizes DUSF’s work in 2017, the first year the student organization was in existence. DUSF was founded to increase student giving and to provide students with hands-on experience in fundraising and development. CASE gave special mention to DUSF’s signature programs, including:

"Awarded each August at the CASE Conference for Student Advancement, the 45th annual CASE ASAP Network Awards celebrates student advancement excellence,” said Robyn Neeley, senior manager of Career Programs at CASE. “We were thrilled that the University of Denver Student Foundation was selected for an Outstanding Emerging Organization award for its commitment to student engagement and student philanthropy at their institution."

DUSF exists to increase student giving across campus and, in the process, foster leadership among these individuals who will soon enter the professional workforce. As students give and participate in fundraising and fund distribution, they deepen their understanding of the difference that their philanthropy and their leadership can have in others’ lives. DUSF fosters civic engagement and leadership as it encourages students to give to the DU causes that hold the most meaning for them.

“The work of DUSF nurtures our students’ nature of goodness and giving,” said Armin Afsahi, vice chancellor for Advancement at DU. “As they give to DU, and as our student leaders participate in the nonprofit leadership function of philanthropy, they become an example for millions of their fellow college students who will become the leaders of tomorrow.”

DUSF has seen exponential growth since the year for which it won the CASE award, growing in its stature as a leader among peer institutions. The organization saw a 105 percent increase in student donors from 900 in Fiscal Year 2017 to 2,190 in Fiscal Year 2018, and one-third of all undergraduate students were donors in 2018. Philanthropiggy’s presence across campus led to a 40 percent participation rate last year among first-year students, more than tripling the giving rate of the previous year. The efforts of DUSF across campus are influencing participation in student giving at all levels, building a strong culture of philanthropy among the student population.

“DU is already asking for thousands of dollars in tuition from students. A lot of students think: Why should we give to DU?” said Harriet Pryor, a junior and Director of Stewardship for DUSF. “DUSF asks students to think not so much about giving back, but about paying it forward. We ask them to think about those experiences and groups that have really made their DU experience special and consider how they might pay it forward to current and future DU students.”

“Throughout the development world, donors want to see the personal impact of their donations on the causes they really care about,” said Nicholas Bowlby, assistant director of student philanthropy at DU and a graduate student himself. “This is true amongst the DU student population, too. The top 10 programs and funds to which students contributed in 2017-2018, including the Club Sports Program Fund, The Student Emergency Fund and The Food Pantry Gift Fund, all have a direct impact on DU students.”

“We want students to realize that most of us don’t have much money to give, but when students give a dollar here and a dollar there, it really makes a difference. We’ve raised thousands of dollars this year for causes that students care about from students giving the little they did have,” Pryor said.