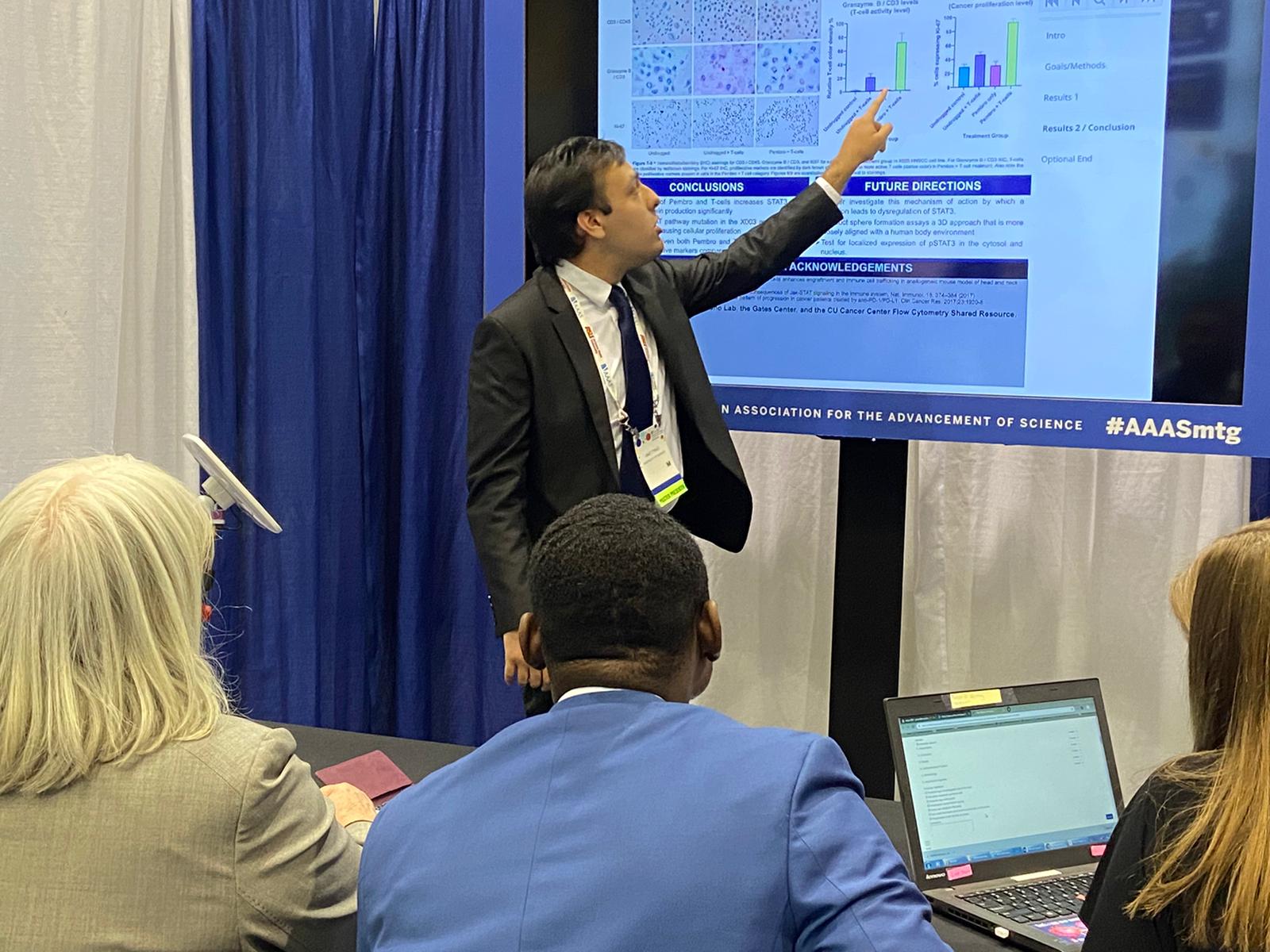 Anit Tyagi presents his research at an e-poster competition.

Why does sickness exist? And how can we help those suffering from sickness?

Anit Tyagi, a University of Denver sophomore studying chemistry and political science, considers these questions daily. For years, they have guided him on a steady path toward medical research — a path inspired by the trials his grandmother faced during Alzheimer’s and diabetes treatments.

Although he’s only halfway through his undergraduate career, Tyagi already has accomplished enough for an impressive resume. In addition to volunteer work and three ongoing research projects, he is co-author on three scholarly articles, founder of the DU Undergraduate Research Association, and a junior senator for Undergraduate Student Government.  And he’s just getting started.

“I realize that research is a never-ending commitment to piecing together parts of a puzzle that you may never see the end product of,” he says. “But knowing that you are contributing to something much larger than yourself — that’s what really keeps me coming back to research every day.”

Most recently, Tyagi received one of the top accolades for STEM students of his age, when he received the Barry Goldwater Scholarship. Tyagi is one of 396 sophomore and junior undergraduate students in the United States to earn the prestigious scholarship this year. As one of the few sophomore-level recipients, he will benefit from the $7,500 financial reward this year and next.

For Tyagi, the money, which he says will free up funds for future research conferences and materials, is secondary to the validation that he’s on the right path.

Struck by the “beautiful complexity” of medical drugs and their therapeutic uses, Tyagi first came to medicine through volunteer work at a Veteran’s Affairs (VA) hospital. There, he witnessed not only the importance of medicine, but also patient care.

“[The Veteran patients] were the most interesting people you could talk with, and I realized medicine is a combination of both the science behind how we treat disease and the understanding that we are helping human beings,” he says.

He has carried that attitude through his research, to which he dedicates many hours each week despite a heavy course load. Even before beginning pre-health studies at DU, Tyagi reached out to researchers and found continuing work in two labs at Aurora’s Anschutz Medical Campus.

One of his projects examines Keytruda, an immunotherapy drug used to treat cancer. Some doctors believe the drug is the future of cancer treatment, but Tyagi notes that it has caused more aggressive tumor growth in a small subset of patients. Tyagi works with Dr. Antonio Jimeno at the University of Colorado School of Medicine to find out why. Tyagi recently presented this research at an American Association for the Advancement of Science e-poster competition in Seattle, where he was awarded second place in the medical and public health category.

After graduation, Tyagi plans to pursue an MD or dual MD/PhD program with an emphasis on drug research, but in the meantime, he’s studying in a variety of disciplines to help create an effective and holistic approach to medicine.

Tyagi’s studies in political science reinforce his interest in health care outside the laboratory and doctor’s office. “In science there’s a whole idea of bench to bed, where you’re doing the research in the lab and then you bring it to the patient’s bedside,” Tyagi explains. “But I feel there’s a much bigger aspect of it, which is policy making and bringing good ideas up to a national scale so that they work everywhere.”

To Nancy Lorenzon, a professor in DU’s College of Natural Sciences and Mathematics and the University’s pre-health advisor, this attention to the broader health landscape sets Tyagi apart.

“Anit is wholeheartedly dedicated to learning and advancing medicine through research, policy and clinical knowledge,” she says. “He intentionally has sought experiences that will provide him with the strongest foundation one could have in preparation for medical school and for being a change leader for medicine in the future. Anit will do amazing things in the future — he has already accomplished the extraordinary as a high school and college student.”