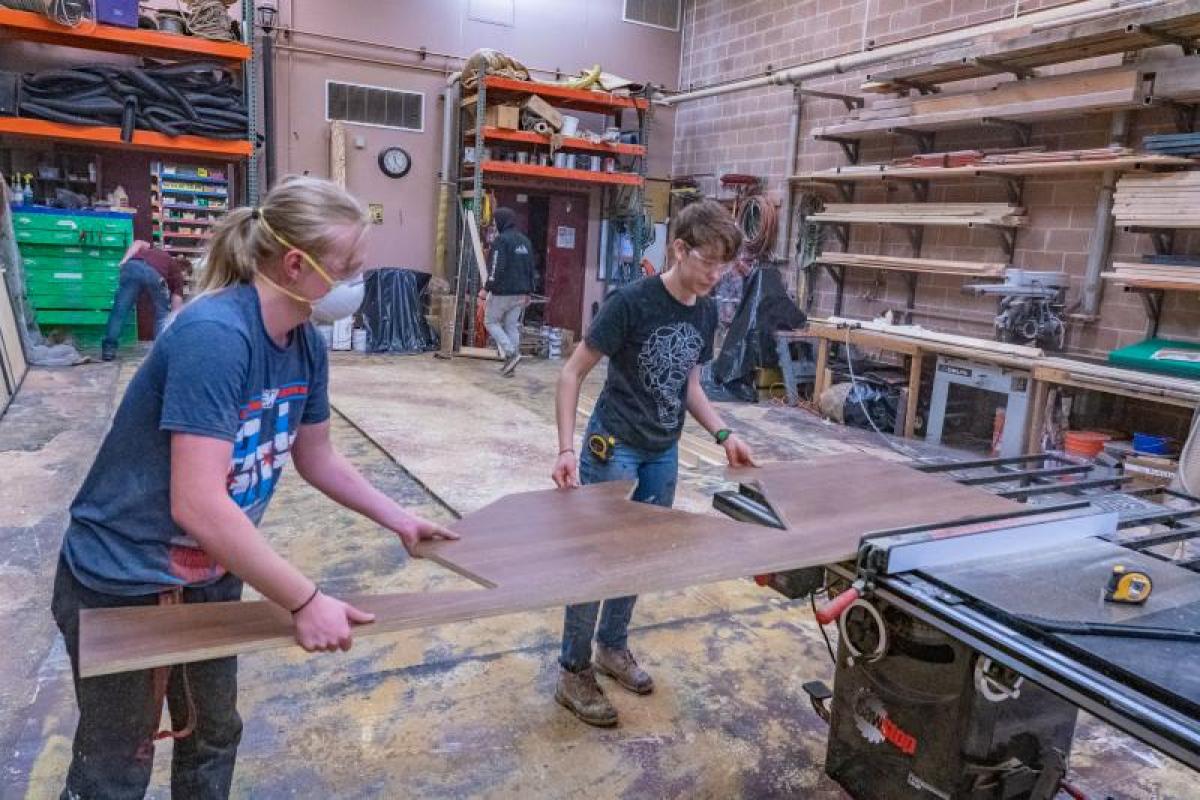 They could have worked for a big-box retailer or at the mall to make some extra money over winter break, but a handful of DU theater students chose to get a jump on their future careers instead.

Making a temporary home in the Newman Center for the Performing Arts’ backstage scene shop — home to buzzing table saws, whirring grinders, banging hammers and lots and lots of plywood — the group of 12 undergraduates teamed up to build and paint sets for two upcoming theatrical productions.

The students loaded the storybook-inspired set for Sasquatch Productions’ staging of “Matilda the Musical” into the PACE Center in Parker in early January for shows that run Jan. 17–Feb. 9, while the ’60s-flavored flats for Lamont Opera’s upcoming production of “The Magic Flute” were put in storage, to be pulled out prior to the show’s debut on April 23. The sets were designed by professional set designers and brought to life by DU students like sophomore theater major Haley Hartmann, who spent most of December working on the project.

“I want to go into scene design, so having the technical skills is a really smart thing — to be able to understand how something comes together,” Hartmann says. “There’s something gratifying about starting a project and following it through and saying, ‘I built that.’” 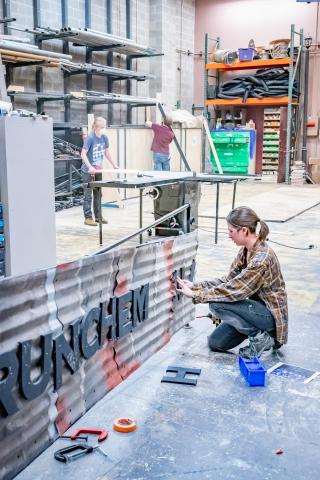 That’s music to the ears of theater department chair Steven McDonald. He set up the in-house production shop in 2018 to give DU theater students equivalent experience to the “summer stock” programs that the University’s quarter system makes it difficult for them to take part in.

“Summer stock is an internship/apprentice program that gives students experience and connections and a chance to understand the ‘real world’ of the business,” McDonald says. “Unfortunately, most summer stock is built around the semester system, so those productions begin in May. Our students have a hard time clearing their schedules.”

So McDonald built time into summer and winter breaks for theater students to get real-world experience in house, building sets for on- and off-campus productions. Taking full advantage of DU’s technological amenities, the team even uses the maker space in the engineering building for some of the fine design work. Thus far, the project has put students to work on “Reunion,” an off-Broadway show that debuted at the Newman Center in 2018; Lamont Opera’s 2019 production of “Il Trittico”; and another Sasquatch production, “The Full Monty,” also at the PACE Center.

The setup is a moneymaker for the department, and it’s a chance for students to work with professionals in the field and set foot in performance spaces beyond campus.

“It’s the foot-in-the-door kind of thing,” Hartmann says. “You have to have the first internship to get the second one. To be able to have [these skills] on a resumé is like that.”

Eventually, McDonald hopes the production shop will help to differentiate the DU theater program and attract students looking for careers on the tech side of the stage. With a decline in the number of high school seniors applying to college, he says, “the number of kids who want to do stuff like this is going to get smaller. To make ourselves more attractive, what we’re really doing is upping our game. We like the size we’re at, but if we want our kids to grow, this is the best way to do it — to provide them opportunities that allow them to learn new skills.”