DU Students get a taste of Broadway 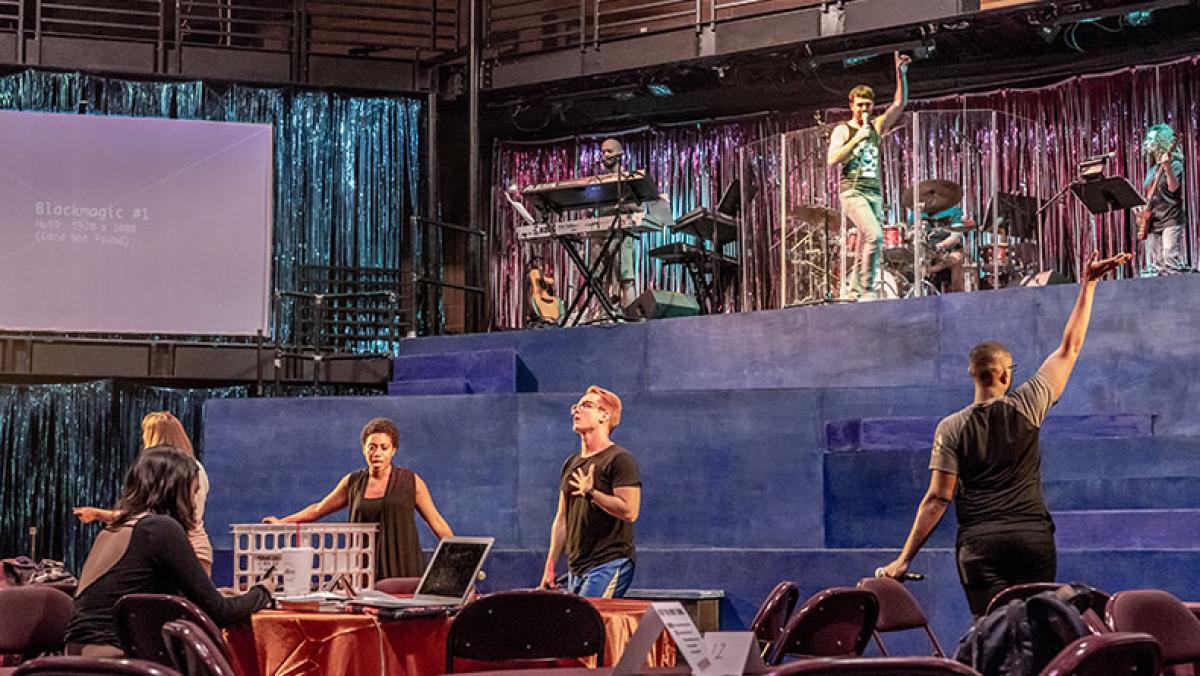 For theater students around the country, summer is the time to intern on professional productions, building valuable experience and connections for future careers.

DU theater students, however, have a tougher time finding summer work as many productions begin in May, when the University — being on the quarter system — is still in session.

So when Steven McDonald, chair of the DU theater department, heard from his friend and former student Carolyn Miller — now a New York producer looking to debut an off-Broadway show in Denver this summer — he made her a deal. DU could offer her access to the Newman Center’s Byron Theatre at a reduced rate if the production would provide opportunities for DU students to work on the show.

The result is “Reunion,” a pair of interactive concerts running July 26 through Aug. 26 at the Newman Center for the Performing Arts. Twenty-one DU theater students are involved in the production — on stage and behind the scenes — and five alumni are on board as well, in roles ranging from lighting designer and set designer to dramaturg.

“It’s the big leagues. It’s really interesting to see how things are done,” says senior theater and business major Tess Neel, an assistant stage manager on “Reunion.” “Part of being on the stage management team is you get to sit in on production meetings and stuff like that. It’s been really cool to see how big professional shows run.”

Taking a cue from recent hit shows in New York, the “Reunion” productions — one is set in 1969, one in 1985 — are interactive, immersive experiences that mix live music and improv comedy. Audience members take on the roles of attendees at a high school reunion, complete with a live band playing the hits of the day. After choosing a fictitious identity, guests “can grab a drink, meet old — and new — friends, and dance to a rocking band as they relive — or rewrite — their past,” Miller says.

“I think it will be something different for the Denver area,” says senior theater major Katie Goodwin, head of wardrobe on “Reunion.” “I don’t think there has been a lot of interactive theater [here]. The people who come will get this experience that they’ve never gotten before, and I think that they’ll leave very happy with what they chose to buy a ticket for.”

Featuring actors from the TV show “New Girl,” the musical “Avenue Q” and other hit shows, “Reunion” was created by Susan Draus, who has served as musical director on touring productions of “Beautiful” and “Book of Mormon.” Much of the show’s creative team has similarly impressive credits, making its DU run a great opportunity for theater students looking to work professionally after graduation.

“You meet these people and they’re so genuine and nice and down to earth, and then they tell you all the things they’ve done: ‘Oh yeah, I did this tour throughout the entire U.S.’ It’s really nice to hear from people who have done it for a while, because that’s going to be me after I graduate,” says Goodwin, who also acts in the show. “It’s been a huge opportunity for me as a student, especially since I’m graduating next year. It gives me new contacts, and it helps me build my network.”

That’s exactly the idea, says McDonald, who hopes the partnership will continue for many summers to come, as the team brings new shows to try out in Denver.