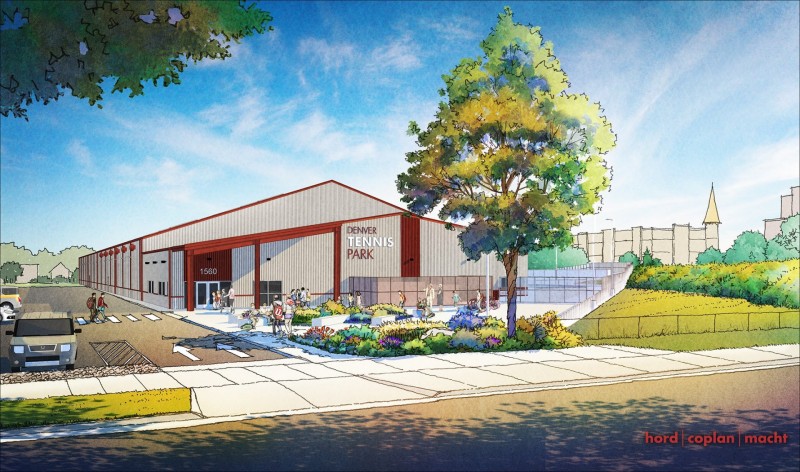 The University of Denver Men’s and Women’s Tennis teams will soon have a new home at the Denver Tennis Park, a new $14 million public indoor/outdoor tennis facility which will be built in part thanks to two 1-million dollar gifts from Catherine “Cappy” (BFA ’76, MBA ’80) and Robert Shopneck (MA ’73, JD ’76), and Jane Hamilton and their families. The facility is the result of a groundbreaking public-private collaboration between the Denver Tennis park, Inc. a not for profit organization dedicated to serving Denver’s youth, the University of Denver and Denver Public Schools. In addition to serving DU’s NCAA Division 1 tennis programs, the new facility will be managed and operated by the Denver Tennis Park for the benefit of DPS students and the greater Denver community.

Cappy Shopneck, an avid tennis player, is in the DU Tennis Hall of Fame. She has been a trustee since 2006 and currently serves as a Vice Chair on the board. Cappy, Jane and their families have created this cornerstone gift with the intention of using athletics to enhance the community and to impact young lives.

Hamilton served the University as a member of the Board of Trustees until 2015, when she retired after for nearly 40 years. She received an honorary doctor of higher education in 2016. She holds the distinction of Honorary Life Trustee, and is a parent and grandparent of DU alumni. She and her late husband, Fred, have made longstanding, transformational philanthropic investments in the University of Denver and at numerous cultural and educational institutions across Denver and the United States.

“Tennis for me has been both an enjoyable activity and a great teacher,” says Shopneck. “Beyond fitness and sportsmanship, it taught me mental focus, setting and achieving goals, working hard, and learning from mentors and teammates, all things that have made me successful in later life. The Denver Tennis Park is a unique opportunity for me and my family to share and strengthen these qualities in our community, expand our support of youth in Denver, and advance the University of Denver. I’m pleased to be among the leaders in this visionary endeavor.”

“Tennis has been an important sport for my entire family. We’ve enjoyed playing as a family over the years and have so many fond memories from the court. We are proud to support this initiative to encourage and provide access to youth in our community as well as for DU athletics.” Hamilton says.

University of Denver Chancellor Rebecca Chopp said these gifts are a prime example of the many community-based initiatives called for in the University’s strategic vision, DU IMPACT 2025.

“Cappy, Bob, Jane and her late husband Fred have all been dear friends and supporters of the University and its tennis program for years,” Chopp says. “Their generous gifts allow us to strengthen our relationship with our direct neighbors and throughout the city of Denver as we blur the boundaries between campus and community. Having a facility and a not-for-profit organization that serves the University, Denver Public Schools and the greater Denver community opens the door for opportunities for collaborations that serve all Denver youth.” 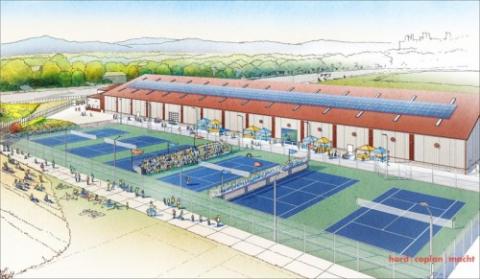 The Denver Tennis Park is located on the east side of I-25 at Franklin Street near DPS’ All City Stadium and expected completion is October, 2018. The facility will be managed and operated by the Denver Tennis Park, Inc. (an independent 501(c)3 under a ground lease from Denver Public Schools. The Denver Tennis Park is the culmination of a four-year initiative supported by several local philanthropic foundations, the University of Denver and Denver Public Schools. The DTP will become the official home court for the University of Denver’s tennis program and will also be Denver’s only year-round tennis facility devoted to youth from beginner to advanced skill level.

DU Vice Chancellor of Athletics and Recreation, Peg Bradley-Doppes said the new facility will not only allow the University to meet NCAA Division 1 requirements by having guaranteed access to indoor/outdoor courts, but the location would also allow for collaborations with the Denver Tennis Park’s youth-serving initiatives.

“Not only is a state of the art facility beneficial to recruitment, but our men’s and women’s teams can finally practice and compete at one venue adjacent to campus” said Bradley-Doppes. “We are so grateful to Cappy, Bob, Jane and their families for their continued leadership at DU and for their unwavering support of our athletics programs.”

In addition to Shopneck’s leadership on the Board of Trustees, the family’s leadership and presence is felt in many ways on campus. Most visibly, the Shopneck Family Writing Center in Anderson Academic Commons is used daily by students, staff and faculty who seek support for writing research papers, grants and more. The Shopneck family also sponsors an endowed scholarship fund to support students in the Sturm College of Law.

Like Shopneck, Hamilton and her family have helped transform the DU campus over the years. Hamilton served on the University’s Board of Trustees and thanks to the generosity of her and her late husband Fred, the campus has been enhanced by the Hamilton Gymnasium, the Frederic C. Hamilton Recital Hall, the Hamilton Atrium inside the Anderson Academic Commons, and the Hamilton Auditorium in the new Engineering and Computer Science Building. In addition, the Hamilton family has been providing scholarship support for students for more than 30 years through their endowed scholarship fund. The Hamilton’s generosity extends throughout campus – from arts to technology.