Pick up your passport for discounts at businesses with DU DNA

Whether you’re enjoying an ice-cold beer on the patio at Stanley Beer Hall or reading a good book at Logan House Coffee, all roads lead back to the University of Denver. Alumni-owned businesses are playing a major role in turning the Mile High City into a thriving hot spot. Now, with the new Crimson & Gold Trail, you can unlock DU’s Denver. 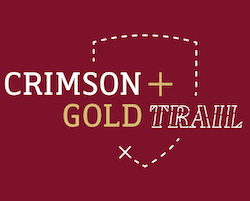 The Crimson & Gold Trail passport is your guide to the metro-area businesses owned and operated by alumni. It offers discounts and deals for 22 businesses throughout the city for $25, with new partnerships on the horizon. The bargains include 2-for-1 drinks, food discounts, hotel deals, retail markdowns and more.

“My hope is this surprises and delights people,” says Brian Elizardi, director of alumni engagement at DU and creator of the Crimson & Gold Trail. “I hope they find new relationships that maybe they didn’t know about. No matter where you go, the University of Denver has some sort of impact, whether that’s an alumni-owned business or faculty research.”

The first sampling of vendors includes everything from local breweries and wine bars to coffee shops and wedding-planning services. Some businesses are already Denver staples like Great Divide Brewing Co., while others, like Bruz Beers, are just establishing their roots as a must-try place in the city.

“We are excited to be a part of the Crimson & Gold Trail,” says Ryan Evans, co-founder of Bruz Beers. “The partnership with DU and its fellow alums has led to an impressive list of food and drink offerings around Denver. Quality is king, and this trail is certainly that. It’s great to see a local University creating such a unique offering in town while supporting small business.”

The idea for the Crimson and Gold Trail passport has been a goal of Elizardi’s for years, and it’s designed to be a vote of confidence for DU’s alumni-owned businesses.

“Owning and operating a small business is no small feat,” Elizardi says. “These are individuals who received the skills and network from the University, and as opposed to going the traditional path, many of them have opted to create their own way. That’s an act of bravery, and we really want to support those individuals.”

The passport not only supports DU’s hard-working alumni, but it also gives back to the next generation of students following in their footsteps. A portion of passport funds supports the Fritz Knoebel School of Hospitality Management through student scholarships—something that was important when Elizardi was creating the concept.

“We wanted to make sure the Crimson & Gold Trail is grounded in our efforts to produce the next generation of hospitality leaders,” Elizardi says.

To support DU alumni, please click here to buy a passport and plan your day out in Denver!