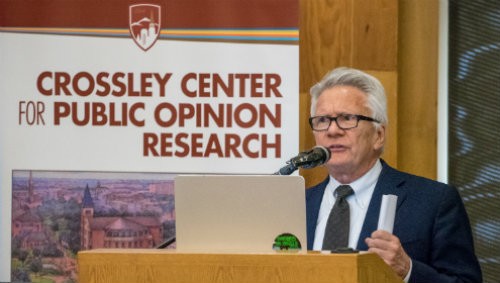 Political pollster and analyst Floyd Ciruli will be inducted into the Denver Press Club’s hall of fame in September. For the past 35 years he has been providing political commentary, analysis and polling for both local and national media outlets. In 1985 he founded Ciruli Associates, a research and consulting firm specializing in public policy and research.

“Colorado has been a rich environment for commenting about politics and public policy, with a host of interesting leaders and issues to track,” says Ciruli, who locally has worked with 9News, KOA, the Denver Post and the Rocky Mountain News. “Colorado has increased in population by more than 60 percent since I began my career in the 1980s. That growth contributed to the state’s shift from very conservative politics in much of the 1990s to a more progressive era in the new century. Hopefully my polling and analysis have contributed to the public understanding of the transition and its causes.”

In 2014, Ciruli helped create the Crossley Center for Public Opinion Research at DU’s Josef Korbel School of International Studies. He serves as the center’s director and an adjunct professor teaching public opinion and foreign policy. “This center of learning greatly enhances the students’ perspective and adds another valuable tool in their repertoire to advance their careers,” he says.

Ciruli will be one of five journalists inducted into the Denver Press Club’s hall of fame this fall. There have been 93 previous recipients of the honor. Ciruli says his goal has always been to combine journalistic values with the science of polling to make sense of Colorado and national politics. “The Press Club award affirms this contribution to civic education and its usefulness to a free, vigilant media watching over the political process,” he says.

Ciruli, who is from Pueblo, has no plans of slowing down. He says the national attention on Colorado continues to grow since it became a swing presidential state. “Politics is becoming more complex, fraught with more threats and opportunities, and students and the public are more interested in it,” he says. “So my teaching, public speaking and working with the media appear to have continued value. That’s good, because I have been lucky to have a profession I really enjoy and which has become busier every year.”