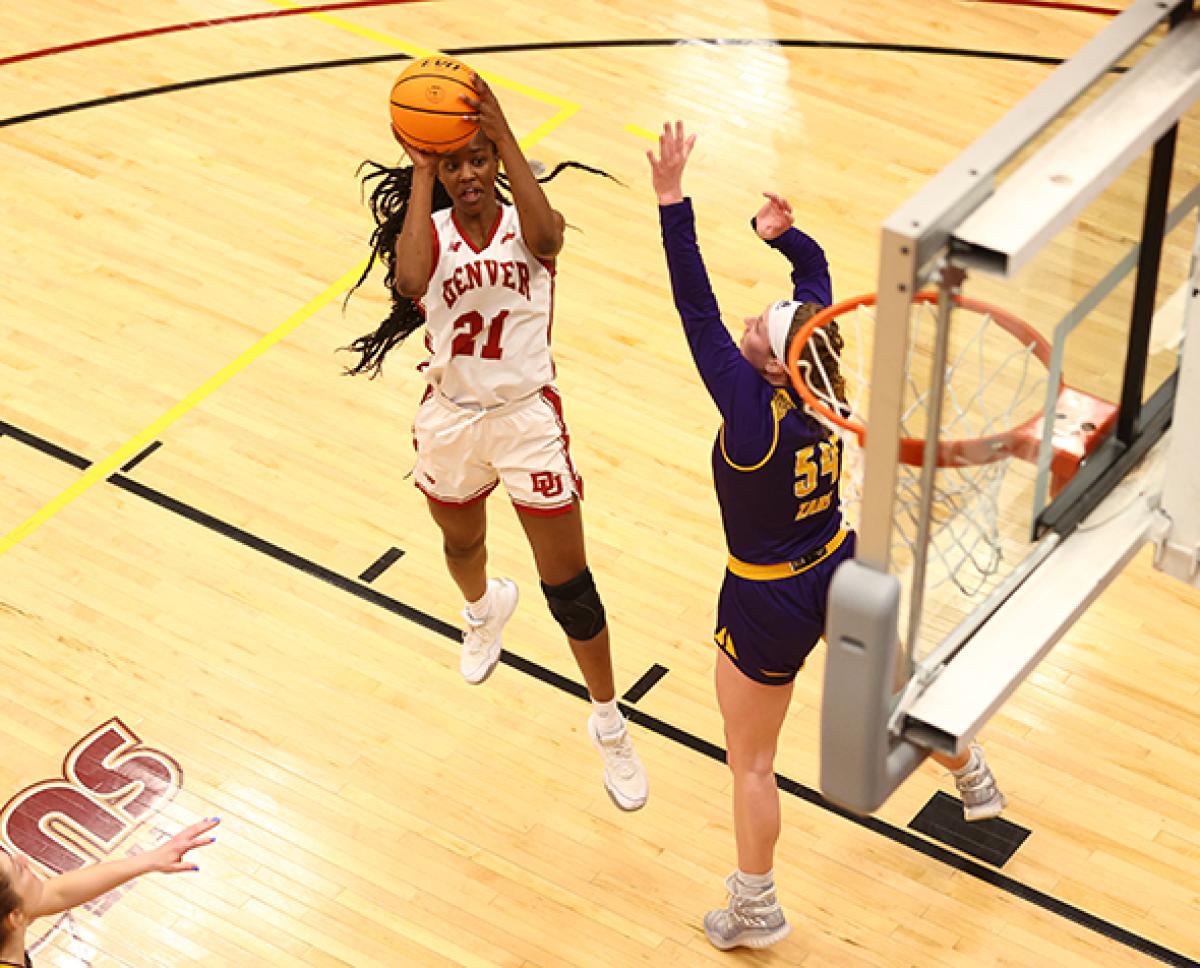 When she was hired to helm the team in 2020, she told administrators she wanted to build a program around prep recruits who would spend at least four years at DU, and place value on not only the history of athletic excellence but also academic rigor and the 4D Experience. So, when the team’s top two scorers transferred out after last season and four more student-athletes graduated or ran out of eligibility, Woods turned to her preferred recruiting pipeline to fill out the roster.

This iteration of the Pioneers will feature five freshmen, some of whom will inevitably join the rotation, plus two new graduate transfers. So many new faces can present challenges for team chemistry, but Woods says she’s been pleasantly surprised.

“We had five weeks together in the summer, and that’s where I first noticed things coming together,” Woods says. “Going in, I thought we definitely had some of the pieces we needed. Watching them interact together, I felt like we had some young women who were ready to lead.”

Woods’ squad forgoes the traditional captain structure and expects every student-athlete—whether a first-year or graduate student—to display leadership qualities. The two graduate transfers, Mikayla Brandon and Ally Haar, were captains on their former teams and handle leadership well. For Woods, it was particularly impressive when those two players, instead of trying to implement their own style of leadership, sought to integrate with the team and discover their new roles more naturally. The coach also pointed to a pair of young guards, sophomore Mary Wilson and junior Emily Counsel, who have displayed both demonstrative and vocal leadership.

For senior Makayla Minett, the team’s highest-scoring returning player at 5.2 points per game, the infusion of young talent has helped her improve her game.

“It hasn’t been hard to adjust because they’ve all brought the energy,” she says of her new teammates. “They’re locked in and want to get the job done. I feel like the bar was raised for me, almost. I had to come in and change my energy and respond to what all these girls were bringing.”

The fresh crop of frosh hail from five different states, from as close as Aurora to as far as Alabama. According to their personal bios on the team website, they all chose to attend DU for some combination of academics, coaching and facilities. They have varied interests and most plan on studying multiple subjects while at the University.

Emma Smith, a freshman guard from Vestavia Hills, Alabama, has an even closer connection to DU: her father, Michael, played tennis at the University. That association put the Pioneers on her radar, she says, but didn’t influence her decision. It was the coaching and academics that did that.

“I had decided in October of last year that I wasn’t going to play basketball here,” Smith says, smiling. “I had toyed with the idea, but it didn’t feel right. Then my season ended, and my high school coach reached out to (Woods). I met her one week and we talked, and she called me back and offered me. It felt like destiny from there, and I’ve been really happy with my decision. My dad was one of the reasons I looked into it, but the coaches and the culture were why I ended up here. I felt a connection immediately.”

The Pioneers open the season on Nov. 7 against the Air Force Academy. Tipoff is scheduled for 7:30 p.m. at Hamilton Gymnasium, and the game will be televised on Altitude Sports’ second station.