The joke always went like this: Leah Konrady was an “exploratory major.” She had no clue what she wanted to do, for college or her career.

What she did know was that she wanted to go to college in Colorado. She had been telling everyone so since she was an 8-year-old. Seared in her memory were scenic drives to the mountains, where the Michigan City, Indiana, native skied every winter.

“I really could see myself there” in Colorado, says Konrady (BA ’08, MBA ’14), who resides once again in her hometown in northwest Indiana. “The downtown [in Denver] was coming along, and LoDo was starting to turn a corner. It was a cool place to be. It was, in a different way, achieving the dream that I wanted.”

Today, that dream is to transform Michigan City, Hammond and other places in Northwest Indiana. In some respects, Konrady would like it to resemble the place that transformed her as a student at the University of Denver.

A winding but highly successful cross-country path in public service has led Konrady to the top job at One Region, a nonprofit dedicated to growing the region’s population and increasing its household income. A fifth-generation Hoosier, Konrady aims to attract talented people to her now-blossoming backyard and keep them there.

“I like an entrepreneurial job,” she says. “I like creative thinking. I really enjoy being around positive people who are willing to think outside the box and are also open to ideas.”

That openness helped give Konrady a compass as she navigated her college journey. It pointed the first-year real estate student to a friend’s earth science class.

By her second year, she had enrolled in the geography department’s field quarter program. In 10 weeks away from campus, she collected data she could see, hear and touch for an intensive science course.

“It’s one of the coolest programs the school has that not very many people know about,” Konrady says. “It started making these ties between what I liked about real estate … and using the earth and the land around you.”

And so when she returned, she went straight to geography professor Mike Kerwin.

“She was really loving it,” Kerwin recalls. “It became really clear that she was enjoying environmental science, and it turned her into a geography major.”

With her new course of study, Konrady felt liberated. She studied abroad in Albania, focusing on sustainable development and water resources. On campus, she rounded out her degree through a broad, liberal arts curriculum.

“It was the best decision I ever made,” she says of changing majors. “That school [the Division of Natural Sciences and Mathematics] definitely shaped who I am and the things I became passionate about, which are influencing my career today.”

Inspired by a 2008 campus visit from Barack Obama, then a candidate for the presidency, Konrady worked on his Indiana campaign after graduating. A subsequent job with her congressman led to a nonprofit position advising the bipartisan Congressional Great Lakes Task Force. Then she traversed to Fresno, focusing on community outreach for water infrastructure. Along the way, she returned to DU and picked up an MBA from the Daniels College of Business, shoring up her financial and leadership skills.

Basically, she hasn’t stopped exploring, which Kerwin says is one of Konrady’s greatest assets.

“It's really rewarding to see students who are active and engaged and taking advantage of college,” he says. “This young woman, who still clearly has so much to offer and is going to do great things, it all began with her not being afraid to change direction.”

No matter how many turns she’s taken, Konrady says she has rarely felt lost — something she attributes to her DU liberal arts education.

“[The Division of Natural Sciences and Mathematics] definitely shaped who I am and the things I became passionate about, which are influencing my career today. It helped me build a skill set that I didn’t have. ... Credit, too, to the relationship [I had] with the geography department. They recognized my passion and what I wanted to do, and they helped me find what was right for me. They were able to tailor things for me. So it was truly the right fit.” 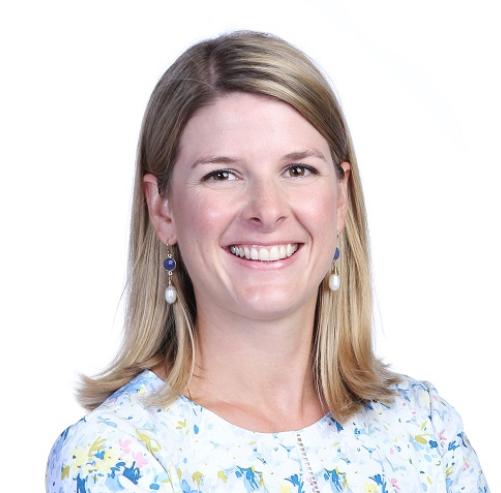 “It helped me build a skill set that I didn’t have that I think I needed,” she says. “Credit, too, to the relationship [I had] with the geography department. They recognized my passion and what I wanted to do, and they helped me find what was right for me. They were able to tailor things for me. So it was truly the right fit.”

Now Konrady wants to make Michigan City the right fit for young professionals like her. Though her scenic, lakeside community is close to Chicago, she says, it lacks the investment characteristic of up-and-coming cities like Pittsburgh; Hoboken, New Jersey; and, of course, Denver. She plans to study the place in which she spent her formative years, drawing on her firsthand experience and even consulting a paper she wrote as an undergrad.

“Even to this day, the land economics, urban planning, repurposing of buildings — all of that, the geography [major] was the foundation for what I’m doing today,” Konrady says. “One never knows where life is going to take them, but I think what I’ve come to realize is that my values are very important to me, and whatever I do next will align with my values.”