Denver residents often are unaware that the city once boasted a world-class public transportation system in the form of streetcars. In fact, many of our buzzing commercial strips and distinctive neighborhoods — Colfax, Broadway, South Pearl, Gaylord, Tennyson — were once home to the tracks that used to cover a large portion of Denver proper.

Thanks to Ryan Keeney, a graduate student in the Department of Geography and the Environment, an interactive digital map is now available for urban planners, history buffs, students and others interested in Denver’s streetcar legacy.

For his master’s capstone project, Keeney painstakingly pored over historic maps and narratives in Denver’s Street Railways, a three-volume collection by Don Robertson, Ed Haley, Morris Cafky and Kenton Forrest. Using GIS mapping software, he then digitized every streetcar line that ever existed within the modern boundaries of the City and County of Denver, from the system's inception in 1872 to its demise in 1950. The resulting map on his website, Denver’s Streetcar Legacy and Its Role in Neighborhood Walkability, allows users to zoom in and out and switch between historic aerial and modern map views. A time slider also lets users view lines by year.

"While it was tedious going through so many history texts to map the lines in such detail, it was really interesting to discover that Denver once had an excellent transit system that was very localized and arguably served the city of its time better than Denver's current transit system," Keeney says.

In addition to creating the streetcars map, Keeney took the project one step further by exploring the way that streetcar lines spurred commercial development and neighborhood walkability.

“Many of the city’s neighborhoods have quiet, pedestrian-friendly commercial areas tucked within them, which developed in symbiosis with the streetcar,” he says. “As people disembarked after commuting from downtown, they would patronize local businesses before walking home. Despite the end of the streetcar, these commercial nodes remain with us today and enhance the functional walkability of the city by virtue of their close proximity to many residences.”

The map allows users to zero in on what Keeney terms Streetcar Neighborhood Commercial Development (SNCD) clusters and view data for each individual SNCD. He hopes that this tool will help urban planners identify holes in walkability, particularly as one of Denver’s 2020 Sustainability Goals calls for reducing single-occupancy vehicle travel to 60 percent of all trips.

“Ryan’s project is completely original and provides urban planners and urban enthusiasts with an interactive resource that reveals early 20th century transportation and neighborhood history and its impact on today’s city,” says professor Eric Boschmann, Keeney's advisor in the geography department. “Many of the desirable modes of urban living and new forms of urban development seen today draw upon aspects of urban design that existed prior to mass suburbanization and the reshaping of cities around the private automobile. So, it is vitally important to have such historical information in an easily accessible online, interactive, and detailed format.” 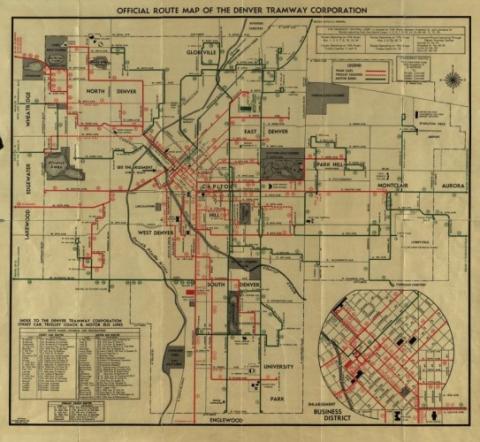 Having grown up car-dependent in suburban Indianapolis, Keeney reports that upon moving to Denver, he was immediately impressed by the city’s walkability.

“I’ve always been interested in how the built environment affects our lives, happiness and environmental sustainability,” he says. “This project has been a fun way to discover what makes Denver varied and unique.”