This article appears in the summer issue of University of Denver Magazine. Visit the magazine website for bonus content and to read this and other articles in their original format.

Sandra and Gareth Eaton have been training young scientists in the field of chemistry for 50 years. As professors in DU’s Department of Chemistry and Biochemistry, they share a passion for science. Chemistry is what brought them together; good chemistry is what binds them.

Gareth was smitten with Sandra the first time he saw her in 1968. She was an undergraduate student from Wellesley College doing research in an instrumentation lab at Harvard along with her professor and several Wellesley students.

“I happened to be walking by one day when she was there. I said, ‘Pretty young girl with a professor at Wellesley running this magnetic resonance at Harvard. Somebody I should meet,’” Gareth recalls.

He asked the Wellesley professor her name, and that’s as far as it went, until six months later when Sandra started graduate school in chemistry at Massachusetts Institute of Technology (MIT). She was one of only three women in the incoming class of 50 students. Gareth was a year ahead in the same program.

“He totally surprised me as I was walking down the corridor,” Sandra says. “It was totally crowded at class change time. So here I was, a brand-new graduate student, quite bewildered, walking down the hall, and somebody calls me by name.”

Gareth caught up to her in the crowd and, seizing the opportunity, invited Sandra to attend an upcoming lecture.

“After that, we started doing more things together, and it didn’t take very long to figure out we have a lot of interests in common,” Sandra says. They married six months later in March 1969.

The couple graduated from MIT with PhDs in inorganic chemistry in 1972. Gareth had graduated earlier in the year and was already looking for work. 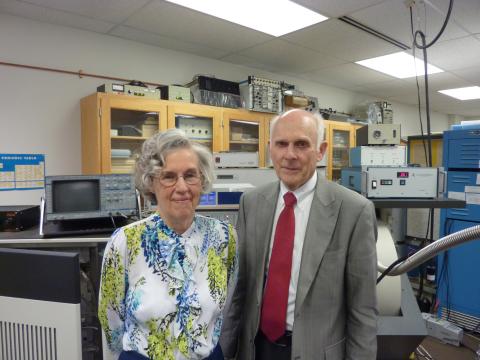 “In 1972, there were more of us getting PhDs in inorganic chemistry at MIT looking for academic positions than there were positions in North America,” he says. “So, at that time, you applied for every job that was available and took any interview that you could get. I came out here.

“I always point out to other people, I was not the first choice for the University of Denver. They wanted someone else [who] turned them down,” he adds.

After negotiating with the dean, Gareth accepted the position. But the University was adamant that there would not be a position for Sandra. “The dean said, ‘About your wife, we will never hire her.’”

“Spousal hire is a huge complicated issue,” Sandra adds, noting that it was taboo to hire family members for the same department.

Sandra soon found a position teaching physical chemistry at University of Colorado Denver. Because the CU Denver campus had very little research equipment, she would conduct research on weekends and summers at DU. This went on for 17 years, what they both call a 17-year interview with the University of Denver.

“Nobody could use the electron paramagnetic resonance (EPR) or nuclear magnetic resonance (NMR) instruments unless they were qualified by her,” Gareth says. “She was basically training and teaching all but formal lab courses [at DU].”

Sandra was offered a professor position in 1989 and has since received the DU Distinguished University Professor Award, the University Teacher of the Year Award and the University Lecturer Award. In 2008 she became chair of the department.

While Gareth is quick to point out Sandra’s career achievements, his own accomplishments are equally notable. He received DU’s Distinguished University Professor Award and the University Lecturer Award and is a Fellow of the Royal Society of Chemistry.

In 2002, the professors jointly received the Bruker prize from the Royal Society of Chemistry for their work using EPR spectroscopy.

“What we study is molecules that have an unpaired electron,” Sandra says. “Most molecules only have electrons in pairs. But there’s some very interesting cases where there’s an unpaired electron. That then makes it behave a little bit like a bar magnet. If you put it in the presence of a magnetic field, you can monitor its properties.

“The properties of those unpaired electrons tell us enormous amounts about the environment they’re in,” she adds.

Their research arm, The Eaton Group, develops new EPR instruments, experimental methods and data analysis tools to characterize unpaired electrons and their application to biomedical problems. They have collaborators and colleagues all over the world who come to them because of their work in an area called “relaxation”—in other words, exciting the electron up to a high energy and observing how fast it comes back down.

Sandra says it’s very informative about the environment. “How do you determine the local concentration of oxygen in a tumor? It turns out you can do that by injecting a molecule whose EPR signal is sensitive to oxygen concentration. Then you’re able to detect it, and that’s led us to do a lot of instrumentation development to find better ways to do the detection.”

The Eaton Group has a long-term collaboration with an oncologist in Chicago who spends half his week in the lab and half the week in the clinic treating people, Gareth says. “We develop instruments and send them to him, and he does most of the animal studies there in Chicago. We’ve fortunately had the insight to figure out how to do it better.”

During their 50-plus-year partnership, the couple has jointly authored 380 research papers and book chapters, conducted research and presented their work at conferences. They say the secret to their success is a willingness to be vulnerable with each other and ask for help if needed.

“It’s a matter of really accepting each of us has talents and things that we can each contribute, and we can do far more together than we could do individually,” Sandra says.

Together they are willing to meet most challenges, even projects deemed impossible.

“We get some crazy idea, decide that it’s something that everybody’s going to consider impossible, and therefore we should work on it,” Gareth says. “The joke around the lab is if we say it’s impossible, it’s just going to take longer.”

Five decades ago, the Eatons chose to teach and do research at a university, even though they could have made “four times the salary” working in industry.

“A large part of what really is rewarding about being at a university is working with the students and seeing students go from just beginning and tentative to being young scientists,” Sandra says. “What we’ve done in science feels good, but what I think really matters in the long term is the opportunities this provides for students to become scientists themselves.

“The students are a key motivator of why we want to be here,” she adds.