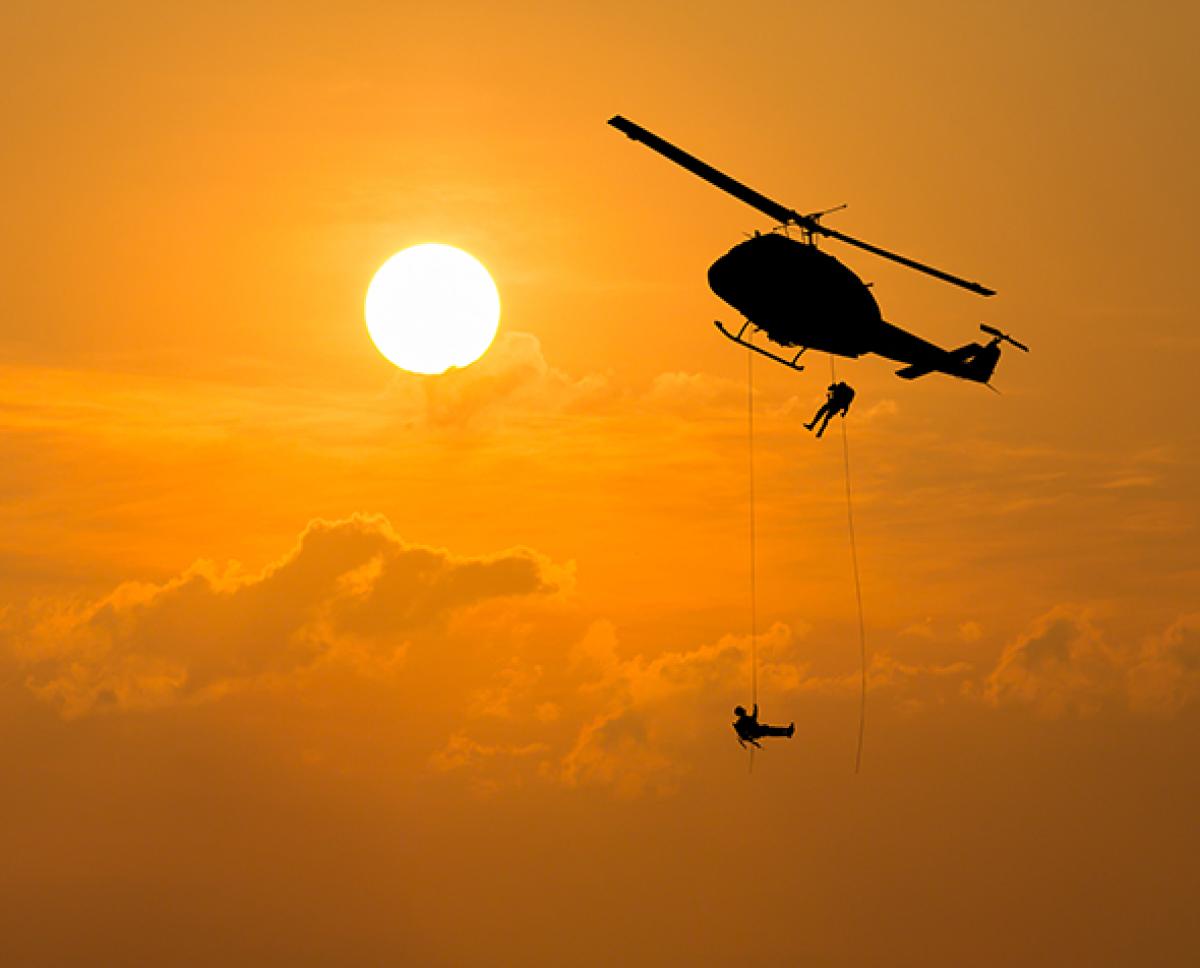 There’s something nearly universal about a college student procrastinating while writing a paper.

But what separates Joshua Longenecker from a typical pupil are the reasons he’s distracted. Longenecker is a United States Air Force Pararescueman, a job he’s had for nearly 10 years. On what could potentially be someone’s worst day, Longenecker is there to help.

In 2020, Longenecker’s pursuit of his Master of Business Administration degree from the Daniels College of Business started from a tent in Iraq. He would frontload his class work whenever possible and do his best to attend virtual lectures from the other side of the world. But between internet outages and calls to serve that could send him running at a moment’s notice, it was something of a balancing act to succeed.

Back in the States, Longenecker continued his studies and service. One Saturday at around 5 p.m., he had been putting off a 10-page paper due the next week when he got a phone call—a climber had fallen in Zion National Park, it was getting dark and a civilian search-and-rescue crew tapped the pararescuemen for help. Longenecker slammed his laptop shut and within an hour was on a helicopter with a rope kit and night vision goggles. He spent all night as part of an operation to rescue and recover those stranded. On Sunday, he grinded away on the paper, running on very little sleep.

It's a balancing act to which other soldiers and veterans pursuing higher education can relate.

“There’s not always a chance to tell people what’s going on,” Longenecker says. “It’s the type of thing where I get a call and I’m running. It can definitely be frustrating at times, and it has added stress to courses. It can be a struggle to explain it to teammates on a project or instructors, and you need them to know what you’re going through.”

Since returning to the U.S., Longenecker’s pursuit of his MBA and his business education have been pulled into sharper focus. His enlistment will end in January, and he’s looking ahead to balancing his education with another way to serve.

In September 2021, he started working with Shields and Stripes, a company that connects veterans and first responders battling trauma with world-class healthcare resources. Shields and Stripes strives to be a resource for those who sacrifice for our country, offering a three-week, in-person mental health rehabilitation program at top-level care facilities. In addition, nine-week virtual programs include one-to-one sessions and options for family support.

According to the annual report on National Veteran Suicide Prevention released by the United States Department of Veterans Affairs, an average of 21 veterans commit suicide per day. Veteran statistics are consistently underreported, however, and Longenecker and other sources suggest that number might be as high as 44 veterans per day. Since Sept. 11, 2001, veterans have been lost to suicide at a rate more than four times higher than the number of active-duty soldiers who were killed during combat operations in Iraq and Afghanistan.

Similarly, more firefighters and police officers are lost to suicide than die in the line of duty.

Longenecker, alongside fellow Daniels students Patrick Hennessy and Maddie Fania, built a comprehensive strategic marketing plan for Shields and Stripes for 2022. Longenecker has also been involved in business development and accounting, among other facets of the business.

“A lot of what I’ve learned at DU I’ve been able to apply to help grow the business processes for Shields and Stripes,” Longenecker says. “The reason I joined Shields and Stripes is the same reason I joined the military. I wanted to be a pararescueman. I didn’t want to do any other job. The job is to save other service members when they’re on their worst day. Shields and Stripes helps police, firefighters and military veterans who are really struggling with mental health. Its mission aligns with what I wanted to do. It’s helping heroes. It’s helping those people on their worst day.”

Shields and Stripes was recently featured in the Veterans Affairs newsletter, leading to a massive spike in applications. Longenecker said it’s sad but not unexpected that so many veterans and first responders need help. Between travel costs and treatment, all of which is covered by Shields and Stripes, expenses can range between $15,000 and $20,000 for a person to participate in the program.

Although more awareness of the battles faced by soldiers, veterans and first responders helps, Longenecker says the next step in reaching more people in need is more funding for Shields and Stripes.

“This program works,” Longenecker says. “We just need more funding for it. We’ve had some incredible outcomes. Half of the people who have gone through this program said it saved their life. Literally, verbatim, saved their life. The other 50% said it had a dramatic positive influence on their life.
“There are a lot of people who need help, and we don’t have all the resources we need to provide it for them.”