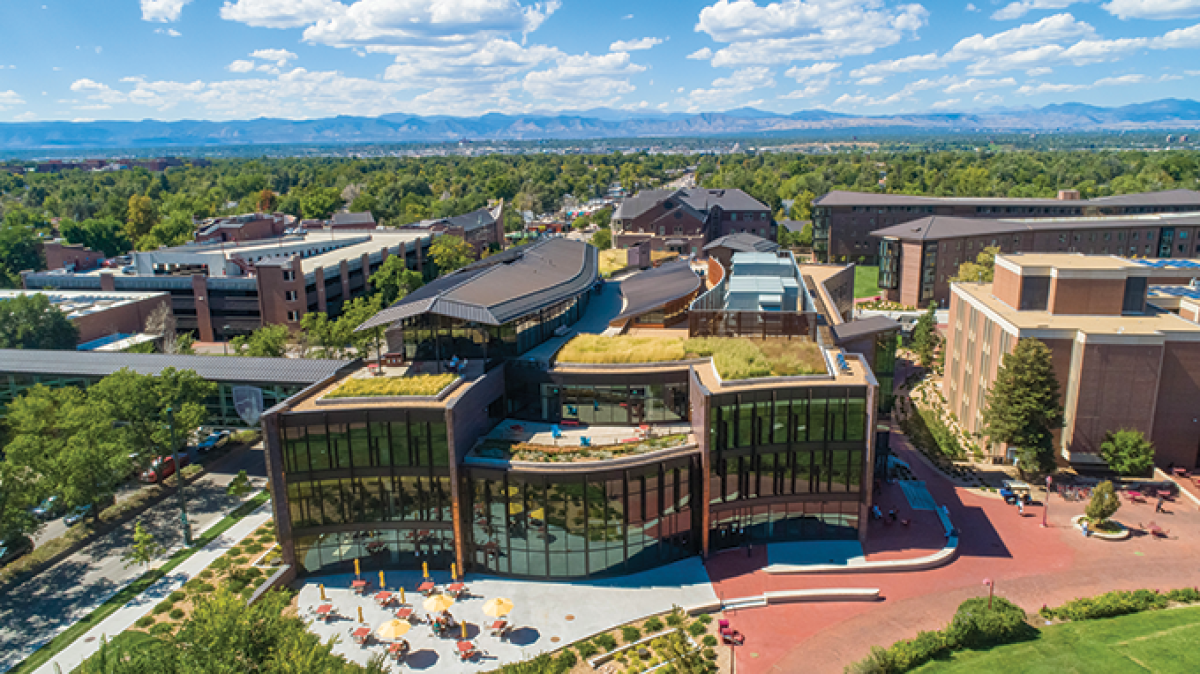 This article appears in the fall 2022 issue of University of Denver Magazine. Visit the magazine website for bonus content and to read this and other articles in their original format.

Green roofs—idyllic retreats located at the top of buildings—have become a popular way to beautify urban spaces and provide environmental benefits to structures and the spaces around them. Not to be left out, the University of Denver incorporated a green roof into the design of its new Community Commons building. The expansive green space on the fourth-floor exterior deck nods to the beauty of Colorado’s native plants and the University’s sustainability goals.

The Community Commons’ green roof is an impressive feat of urban landscaping, featuring several garden beds that surround a floor-to-ceiling glass pavilion. Among the hardy plants in those beds: Tall native grasses that bend in the wind and provide a picturesque foreground for the foothills of the Rocky Mountains to the west and the downtown Denver skyline to the north.

This eye-popping view is intentional, says University architect Mark Rodgers, noting that the green space is meant to “cut out the foreground of the houses and built structures; and [one can] just see the tops of trees, and then the mountains beyond and hopefully the beautiful sunsets.”

Aesthetics aside, the green roof complements the University’s plans to achieve carbon neutrality by 2030. Green roofs can help keep buildings cool, reduce building energy use and absorb rainwater. Just as important, any plants incorporated into the roof can capture and store carbon dioxide, considered one of the major contributors to climate change.

The Community Commons’ green roof isn’t the first of its kind on campus. Technically, Rodgers says, DU has three green roof spaces; the other two are located at the Daniels College of Business and at Nelson Hall.

“However, both of those roofs I would consider to be not anything close to the complexity, the ambition or the public-natured showcasing that we’ve done at the Community Commons,” he says.

The two other green roofs provided designers with valuable lessons related to long-term viability and ongoing maintenance. For one thing, green roofs with plantings require robust—and leak-proof—irrigation systems. The elements are tough on a rooftop, so plantings need to be watered accordingly. Another consideration, Rodgers says, involves the potential for invasive plant species to put down roots—quite literally—where they don’t belong.

“One of the easiest examples is a cottonwood [tree],” he explains. “[The] tap root has a way of getting deep, quick, and can get its way through any minor flaw in the way that the [irrigation system’s] water membranes are applied to the roof’s surface. So, if you’re at ground level and exposed, like Daniels’ green roofs are, you have to be thoughtful that those kinds of seeds could blow in and try to grow.”

The Community Commons was constructed after Denver voters passed a green roof law in 2017. That ordinance required all new buildings of a certain size to have green spaces—a rule that was later updated to include additional forms of sustainable construction, including solar panels. Rodgers says that when the green roof ordinance was passed, DU’s plans for the Community Commons building already included sustainable characteristics that met the city’s new requirements.

“We did definitely pay attention to the green roof ordinance,” Rodgers says. “We also definitely applaud the effort of the city and citizens of Denver, both to vote it in, but also to work with it to make it an effective way to address the growing concerns about the urban environment.”

When envisioning the green roof, Rodgers and his team considered other locations, among them the Burwell Center for Career Achievement and the Dimond Family Residential Village. The team landed on the Community Commons after determining that it would see the most use from DU faculty, students and staff.

“Then it could be a signature element that, actually, would programmatically enhance the program that [would be] on the fourth floor of that building,” Rodgers says.

Given the Mile High City’s sometimes unforgiving climate, building and maintaining an urban green space presents formidable challenges. According to the U.S. Department of Agriculture, most of Denver is classified as a “5b” on the department’s plant hardiness rankings. This means that, due to Denver’s erratic winters, characterized by 100-plus freeze-thaw cycles, it’s difficult to find plants that will thrive—and remain attractive—year-round.

“We see dramatic temperature changes, where quite literally it will be 70 degrees out, and less than eight hours later, it’s below freezing for a length of time,” Rodgers says. “And a lot of non-native plants struggle with that.”

With that in mind, Rodgers and his team worked hard to make sure the green space on the Community Commons roof featured a diverse array of native plant species that can evolve as seasons change and the years march on.

“We wanted a beautiful pattern. And we wanted to express a lot of things with it and provide an educational opportunity,” Rodgers says. “But we also wanted to make sure folks realize that over time, some species may thrive in certain locations, and others may thrive in other areas, and that there will be a gentle and maybe purposeful migration of where different plant species end up doing their best.”