In Honor of our Beloved Joy Burns 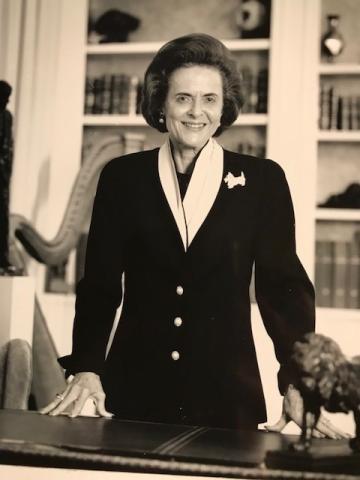 It is with the heaviest of hearts that I bring you some very sad news.

Joy Burns, known to the University of Denver as the first woman to chair our Board of Trustees and as the generous spirit behind so many campus initiatives, academic programs, buildings and amenities, passed away peacefully at home this afternoon.

In our long and eventful history, the University has had few better friends than Joy. She was respected for her steady leadership and strategic thinking, both of which helped the University stave off insolvency and restructure for a 21st century marketplace. Much as she was admired for her leadership qualities, she was also loved for her many kindnesses and for her indefatigable support of student achievement.

During her two stints as board chair, from 1990–2005 and 2007–2009, Joy saw the University through some of its biggest financial challenges and historic triumphs. Along with Chancellor Emeritus Daniel L. Ritchie, she was largely responsible for a radical transformation of the physical campus.

It’s not an exaggeration to say that Joy left a lasting mark on this campus and on all who knew her. She was ahead of her time in so many ways — as a woman leader, as a champion of equity and as a visionary who understood that the world was changing in radical ways.

Joy Burns’ generosity to DU made — and continues to make — life immeasurably better for all of us. In 1997, she and her husband, DU alumnus Franklin Burns, gave $5 million to DU to establish the Franklin L. Burns School of Real Estate & Construction Management. In addition, her name is everywhere on campus: on the building housing the Fritz Knoebel School of Hospitality Management, on a plaza in the Robert and Judi Newman Center for the Performing Arts and on the community ice arena at the Ritchie Center for Sports & Wellness.

Joy also is remembered for philanthropic acts with more ephemeral, but nonetheless resonant, impact. In 2003, when the curtain rose on the Newman Center for the Performing Arts, Burns underwrote an appearance by a prominent baroque touring ensemble, offering the seats free to faculty and staff to ensure they could be among the first to enjoy the new venue.

Thanks to her service, dedication and generosity, the University of Denver presented her with its highest honor, the Founders Medal, at its annual Founders Gala in March 2018. Established by Chancellor Emerita Rebecca Chopp in 2016, the Founders Medal is bestowed upon individuals or families whose transformative leadership and engaged philanthropy represent the pinnacle of DU’s mission and values.

Joy’s life story serves as inspiration for all of us. As Joy Steelman Colwick, she came to Colorado from Houston in 1956 to work for an oil company. Two years later she met Franklin Burns, then one of Denver’s premier homebuilders. One of their first dates involved a DU hockey game — and thus began her romance with her husband’s alma mater.

Joy remained an avid fan of Pioneer sports programs for the rest of her life and was instrumental in bringing DU into Division I. In 1997, she was inducted into the DU Sports Hall of Fame. That honor acknowledged her many contributions not just to DU, but also to Denver’s sports scene and to women’s athletics in particular. As the only female gubernatorial appointee to the Metropolitan Football Stadium Board, Joy once was hailed as the most powerful woman in Colorado sports. She was part owner of the Colorado Xplosion women’s professional basketball team and for a while served as president of the Sportswomen of Colorado Foundation.

Like any great athlete, Joy was always out there competing. She earned a business degree from the University of Houston, reportedly one of the first women in the school’s history to do so. Once established in Denver, she developed, owned and managed the Burnsley Hotel, formerly the Hampshire House, on the fringes of downtown Denver.  She assumed the helm of her husband’s firm, D.C. Burns Realty & Trust Co., in 1995, two years before his death. She also served on the board of the Denver Metro Convention and Visitors Bureau and on a number of task forces and bureaus dedicated to fostering Denver’s business climate. Her love for the Mile High City and her appreciation for the performing arts led her to serve on the board for the Denver Center for the Performing Arts.

A strong advocate for women’s issues, Joy also was one of the founders of the Women’s Bank, later renamed the Colorado Business Bank, and of the Women’s Foundation of Colorado.

Joy joined the DU Board of Trustees in 1981 and was ultimately one of the longest serving trustees in DU’s history when she retired from the board in 2017. When she stepped down from her second stint as board chair in 2009, Chancellor Robert Coombe nominated her for, and she received, an honorary Doctor of Higher Education.

Her service on the board will be remembered for remarkable accomplishments. In partnership with Dan Ritchie, Joy not only oversaw implementation of a number of academic innovations, she also presided over growth of the University’s endowment and the launch of one of the most successful capital campaigns in DU history. Money raised at that time allowed DU to make more than $400 million in investments in new facilities and infrastructure.

The University of Denver owes a lot to Joy Burns, to her fierce spirit, fearless leadership and her dedication to our students. She was a bright light and a force to be reckoned with. She will be sorely missed.

When we are able to do so again, we will find a way to come together to celebrate her wonderful life and legacy at the University of Denver.

Memorial contributions may be made in Joy's honor to the University of Denver. You are invited to designate your gift to one of the following areas of the University that enjoyed Joy's special passion: Women's Athletics; Fritz Knoebel School of Hospitality Management; Franklin L. Burns School of Real Estate and Construction Management; or the Robert and Judi Newman Center for the Performing Arts. Gifts may be made online or mailed to: University of Denver, P.O. Box 910585, Denver CO, 80291-0585.