How Car Salespeople Can Build Trust 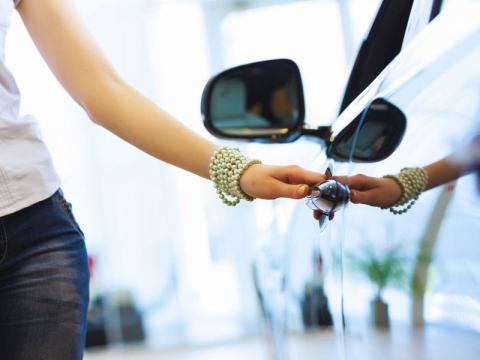 Very few people look forward to the negotiations that are part of the car-buying experience. Consumers often think the car salesperson is giving them a high price that they’ll have to negotiate down. But, new research from the University of Denver’s Daniels College of Business shows that car sellers who disclose the true value of the vehicle might end up with higher profits.

Assistant Professor Yashar Atefi’s study, “Open Negotiation: The Back-End Benefits of Salespeople’s Transparency in the Front End,” was published online in the Journal of Marketing Research on Oct. 1. The study’s co-authors include Sebastian Hohenberg of the University of Texas at Austin, Mike Ahearne of the University of Houston, Zachary Hall of Texas Christian University and Florian Zettelmeyer of Northwestern University.

The research shows that if vehicle salespeople reveal the invoice price early on in negotiations, it builds trust. That, in turn, then causes buyers to ultimately spend more with add-ons and service plans.

“Many buyer-seller interactions and negotiations have fundamentally changed in the past decade or so by the amount of information available to buyers,” Atefi said. “Our findings point to the importance of transparency in light of these new changes. Instead of using the old negotiation strategies or withholding information that the buyer already knows, being transparent from the beginning of the interaction will be highly valued by customers and will earn their trust.”

The researchers were able to collect data at a major U.S. auto dealership chain, observing more than 400 negotiations. The data included all cost information including the dealership’s front-end and back-end gross profits, including service profits. Of the 400 observations, 30 involved the salesperson disclosing the invoice price of the car early on, 44 disclosed it later, 25 did so only in response to prodding from the customer, and 301 never disclosed the price.

“When the salesperson reveals the invoice price of the car right at the beginning of the negotiation, they are basically exposing their bottom line to the customer: the customer can use this information to haggle away the seller’s profit all the way down to the exposed cost,” Atefi said. “However, the knowledgeable customer who has done their research across 10 or more websites that contain this information knows that the revealed cost is accurate. Thus, this radical form of transparency captures the customer’s trust, who will see the dealership as an honest seller willing to sacrifice their own profits by revealing their cost, if such revelation helps earning the customer’s business.”

The researchers found that when the customer steps into the finance and insurance department to finalize the deal, the earned trust will pay off in the form of higher profits from selling items that typically are more difficult to communicate their value to customers. These items include products and services such as GAP insurance, extended warranties, add-on products, financing options, etc. For these items, there is typically less information available online and customers have difficulty trusting the word of the dealership that they would need these items, unless their trust is already earned on the front end during the negotiation phase.

The researchers found that sellers who revealed cost at the beginning of a negotiation had customers who spent significantly more on the back end—around $1,400, on average—compared with salespeople who revealed the price later or not at all.

“Besides spending more on the add-ons sold on the back end, customers to whom the invoice price was disclosed during the negotiation were also more likely to come back for service a year later,” he said. “It is important to note that according to the National Auto Dealership Association, profits from the service department as well as the finance and insurance department constitute the bulk of the profits that an average auto dealership generates, and thus transparency during the front-end negotiation drives the overall profitability up.”