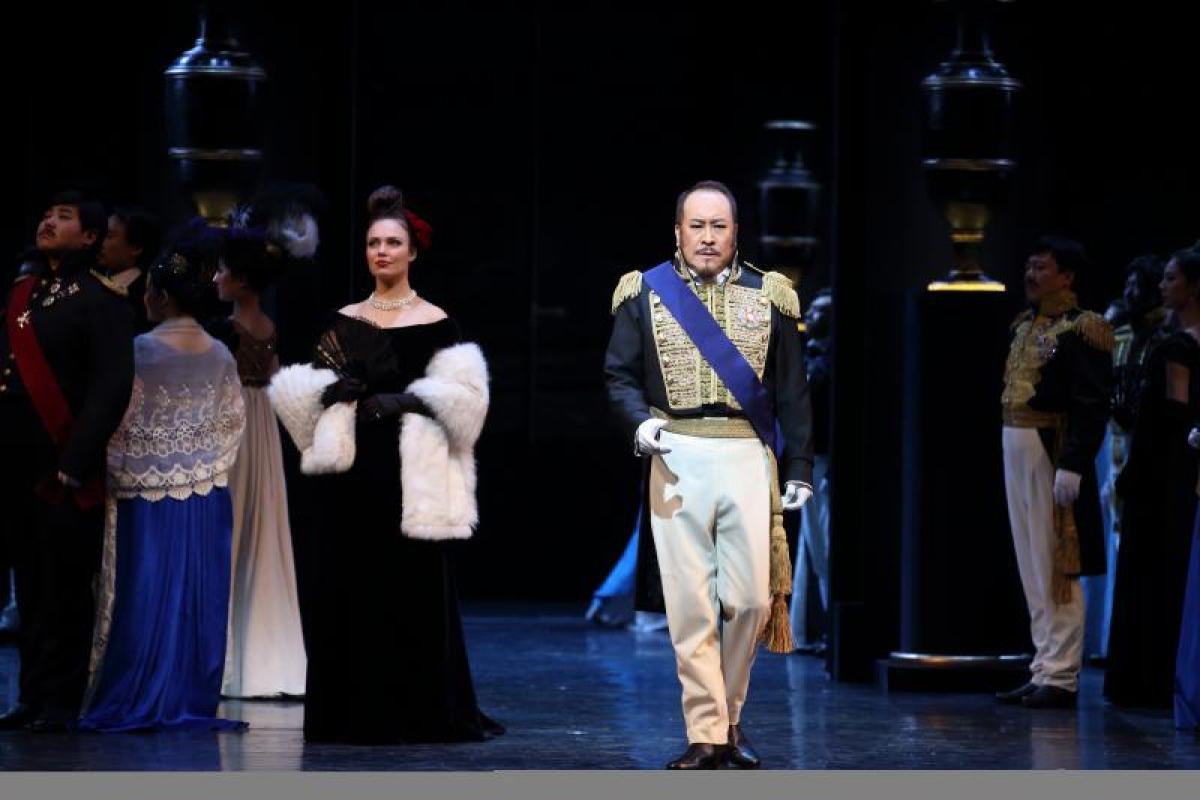 The Lamont School of Music has named Chinese opera luminary Hao Jiang Tian (MA ’87) as the recipient of its inaugural Distinguished Alumni Award. The award was proposed to the faculty by Lamont director Keith Ward, who just started his second year at the school, as part of an effort to engage and connect with Lamont alumni. It will be formally announced at the Lamont Award Convocation in June.

Now in his 60s, Tian has sung more than 1,400 performances of 50 operatic roles worldwide. A regular at New York’s Metropolitan Opera for 20 years, he has appeared with such legendary opera stars as Luciano Pavarotti, Plácido Domingo, Kiri Te Kanawa, Renée Fleming and Anna Netrebko, among others.

Nominated for a 2008 Grammy for Best Opera Recording, Tian also penned an autobiography, “Along the Roaring River: My Wild Ride From Mao to the Met,” that was the basis of a 2009 PBS special. More recently, he founded the ISing! International Young Artists Festival, an initiative that helps young vocalists develop their singing careers.

“We established the Distinguished Alumni Award to celebrate and honor exceptional accomplishments by our Lamont alumni,” Ward says. “It seems fitting that the first award, selected through a faculty vote, is given to Tian, who has built a remarkable international career performing at the Met and in opera houses around the globe, singing with many of the greatest artists of our time, and giving back through education initiatives.”

Tian was born in Beijing, the son of a conductor and a composer. He grew up largely on his own during the Cultural Revolution after his parents were sent to re-education camps. Forced to work in a factory by day, he spent his nights learning government-forbidden love songs and various popular tunes of the day. When China’s conservatories re-opened, he applied and was the only singer among 500 applicants to be selected for a spot at the Beijing Conservatory. From there he came to the U.S. and to Lamont, where he began to prepare for his opera career.

Below are excerpts from an email interview the DU Newsroom conducted with Tian.

Q: How did you come to study at Lamont? Had you been to the U.S. prior to studying there?

A: In 1982, a friend helped me apply to music conservatories in the States. I sent applications to five different conservatories, but only Lamont accepted me with free tuition. I think I was among the first 10 Chinese singers who came to the States to study voice during the early ’80s. Frankly, I knew nothing about opera. I loved adventure and wanted to come to this country to study.

Q: How were you first introduced to opera?

A: The first opera I saw was on the first day I arrived in New York — Dec. 17, 1983 — at the Metropolitan Opera. I was blown away by how beautiful the Met opera house was. The opera was “Ernani,” conducted by James Levine, starring Luciano Pavarotti. It was so beautiful that I will never forget my first impression seeing an opera. It was impossible to dream that I could ever sing on the same stage with Pavarotti, which I did exactly 10 years later, on Dec 17, 1993, in Verdi’s opera “I Lombardi” at the Met.

Q: When you look back at your time at Lamont, did you have any inkling that you would achieve the success you went on to enjoy?

A: I never thought of being successful, because on the first day I started at Lamont, I began my job washing dishes in the student union. The only thing in my mind was to survive; I had no money and did not know English. But I was happy because it was a beautiful snowy day; the snow was deep, clean and quiet. I had never seen it in my life.

Q: What is the biggest lesson you have learned from your opera career?

A: From the first day at Lamont, I met so many people who were so kind and willing to help me, from teachers, students and friends to the kitchen staff in the student union. Throughout my opera career, I can share so many stories I have seen and experienced of people helping each other. It became clear to me that I want to give back. I want to give help to people.

Q: How does it feel to be honored with the Distinguished Alumni Award from Lamont? Have you stayed connected to the school over the years?

A: I am very grateful to receive the honor as a Distinguished Alumni of (Lamont). Ten years after I graduated, I went back to Lamont to give a recital for a fundraising event. Then I went back again to give a talk on my book, “Along the Roaring River: My Wild Ride From Mao to the Met.” The auditorium was packed with many new and old friends, and that day really brought me back to my years at Lamont. I am still busy traveling, singing and doing projects, but I hope I can find a way to go back to Lamont, to spend some time with colleagues and students.