“Life is a Cabaret, Old Chum, Come to the Cabaret!” 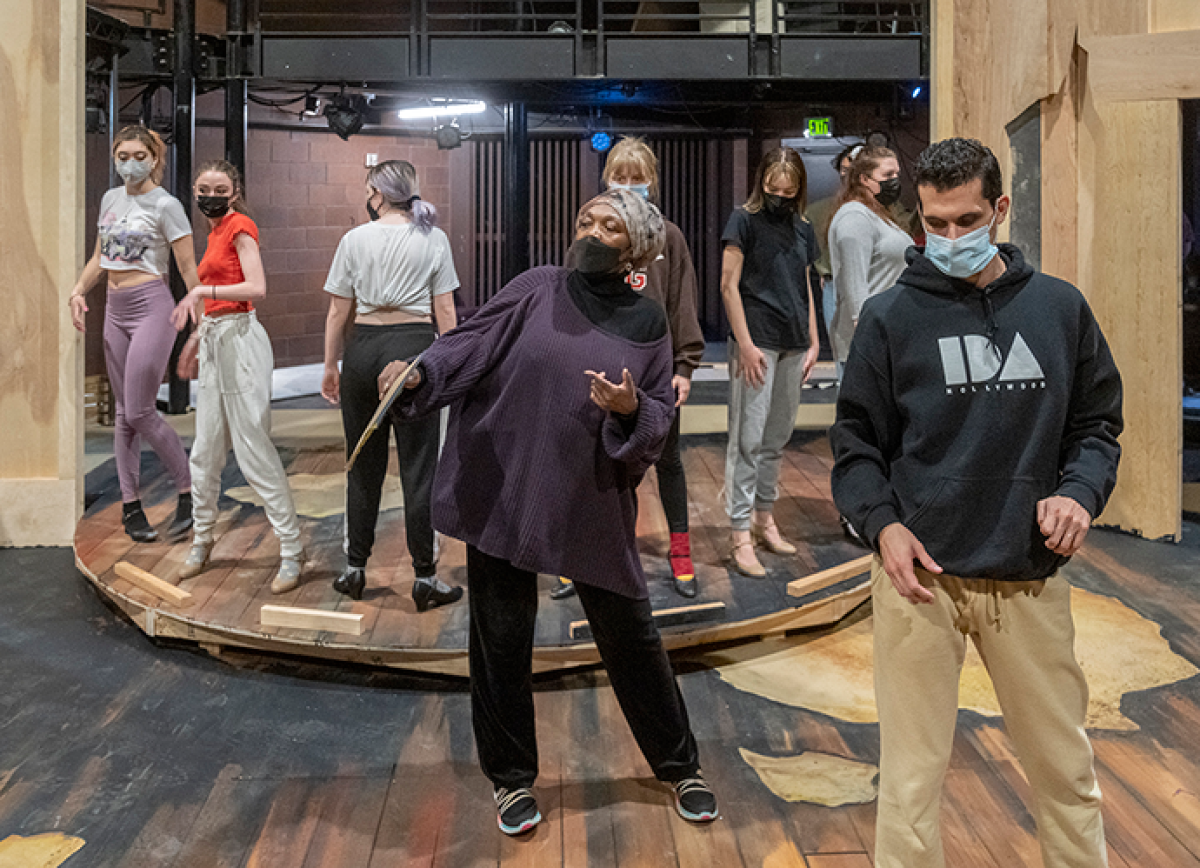 Fast music and fancy footwork will have audiences tapping their feet during the Theatre department’s upcoming performance of “Cabaret.” Leading the dance routines is choreographer Candy Brown, who brings Broadway-level experience to the DU stage.

Brown was invited to choreograph the show through the new Artist in Residence Fund, which helps the Theatre department bring in professional, world class and diverse artists. She brings decades of experience working in TV, film and stage, and has collaborated with legendary director and choreographer Bob Fosse.

“I first met Mr. Fosse when I auditioned for him to be a part of Liza Minelli’s TV special,” says Brown. The audition was in 1972 after “Cabaret,” which Fosse directed, came out in movie theaters. “The next day, I got a phone call from the company manager saying Mr. Fosse would like to hire me. I was stunned and over the moon excited. That is also when I first met John Kander and Fred Ebb,” composer and lyricist for the original Broadway production of “Cabaret.”

Brown subsequently worked for Fosse on “Pippin” and “Chicago,” where she learned “the why” of choreography.

“Usually choreographers just showed dancers the moves and that was it. He [Fosse] told us why we were doing the moves — what we were trying to evoke, our objective. I often credit him with being my first acting teacher,” she says.

Greg Ungar, associate professor and director of the show, says that Brown is a professional mentor, teacher and collaborator. She even called her friend John Kander who, at 90, made a recording for the entire DU cast to cheer them on.

“Candy is invaluable to the show,” Ungar says. “She designed all of the dances for the Kit Kat Klub, taught all of the dances, and collaborated with the students on how to construct storytelling through movement.”

Although DU classes were online during the first two weeks of winter quarter, Brown made sure there was no lost rehearsal time, says Ungar.

“Candy was the first one to say, ‘no problem,’ we're going to do Zoom choreography for two weeks. And she taught dances over Zoom … before we actually got together.”

“So, file that under team player and coming to the rescue!” he adds.

“Working with Mr. Ungar has been a joy,” says Brown. “We see so many things through a similar lens which creates a professional cohesiveness. Martha Yordy [musical director], with whom I have worked before, also brings a professionalism that certainly enhances the students’ growth. It’s fun to work hard again.”

After 30 years in film and television, Brown moved from Los Angeles to Denver in 2009. She no longer performs, but she does teach a class in body awareness for the actor in the theatre department of the Denver School of the Arts. “Teaching actors how to get in touch with their bodies, which is their instrument, is my bailiwick,” she says.

Brown calls it an honor to help students understand what it takes to put on a musical.

“It isn’t just some steps and songs and costumes and ‘ya got a show!’” she says. “Hopefully, I can dispel the myth of how easy it is and that it takes a lot of hard work, dedication, training and discipline.”

“I am thrilled that the students are really digging in and working hard to do their best. They have certainly grown exponentially and have exceeded my expectations!” she adds.

In addition to Brown, students are learning from professional musicians and scenic and costume designers on the set. “We try to involve students at every stage of the process, while also using professionals, so they can see what it's like to work in a professional setting,” says Ungar.

“Cabaret” was performed March 3-6 in the Byron Theatre in the Newman Center for the Performing Arts.