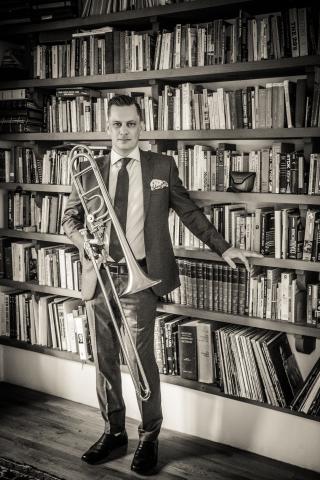 He’s had a long career as an in-demand performer, but trombonist Richard Harris says it always was part of his plan to end up in academia.

“It’s always been a goal of mine to go out and play and have a career, performing at as high a level as possible, and then eventually to move over and share what I’ve learned and to continue to be a creative performing artist,” says Harris, who was born and raised in England and came to the U.S. to study at Indiana University.

Harris — who has performed with musicians such as Sting, Boyz II Men and Andrea Bocelli, as well as with orchestras around the world — will begin that part of his career journey this fall, when he joins the trombone faculty at DU’s Lamont School of Music. He leaves a busy life of performing and recording in New York to come to Colorado.

An academic job, he says, “is primarily about the teaching, but it’s also about the scholarship and how do I, as someone who’s had a performing career, continue that in an academic environment? The idea of commissioning works and the idea of doing recordings and collaborating with colleagues — not just at DU, but around the country — to create interesting artistic projects is really exciting.”

He also is excited to involve students in those endeavors and to prepare them to create careers in a musical world that looks quite different than it did even 10 years ago. Working musicians today have to be able to play any style of music, he says, and they have to have a very entrepreneurial mindset.

Harris says the DU job is a perfect fit, both personally and professionally. His wife, viola player Margaret Dyer Harris, is from California, and he runs a music camp each summer in Santa Fe, where Margaret plays with the Santa Fe Opera. Their son just turned 1, which makes it a good time to settle down.

Not to mention, Harris just had a feeling about DU from the moment he first saw the job posting.

“When I saw the job advertisement, it said something along the lines of, ‘We need a musician who is able to prepare students for the changing landscape of being a musician in the 21st century,’” he says. “And I thought, ‘Aha!’ There is a school that is not just trying to be a conservatory; there’s a school that isn’t just saying you have to have a doctoral degree, even if you’ve never played a concert in your life — there’s a school that’s thinking a little bit differently.”

A longtime proponent of the power of the arts to create positive social change, Harris also is excited to work with DU’s Prison Arts Initiative and other public-good programs within the University. In New York he served on the board of Musicambia, a nonprofit that teaches classical music in prisons and jails across the U.S., and as a member of the chamber ensemble Decoda, he led the group’s workshop activities at New York City’s child welfare and preventative services department.

“That’s just one way you can use music in your community,” he says of his nonprofit work in New York. “It could look different in another town. That’s what I want to impart to students, is it’s up to you to work that out. What does your community need? Where can you use your love, your gift and your talent for music? Where can you use that so that you’re fulfilled and that you’re giving something back to your society?”